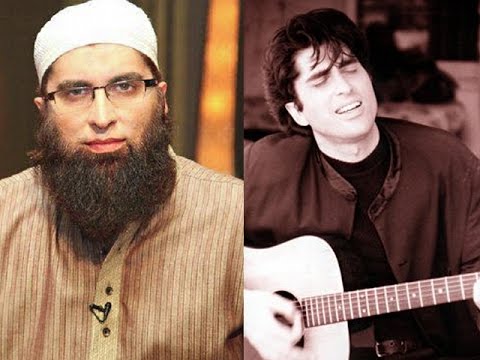 The pop icon lost his life in a tragic plane accident in 2016, leaving behind a legacy of unforgetabble song

He came, he sang and he conquered; that’s the best way to describe the 1990s pop icon Junaid Jamshed. For someone who started his career as a band member, and later branched out as a solo artist, Junaid Jamshed achieved a lot in his lifetime. Before his tragic death at the age of 52 on December 7, 2016, he not only established himself as an entrepreneur, but also as a best-selling naat-khwan and was a role model to many who grew up listening to his songs, and later his sermons.

Born on 3rd September 1964, Junaid Jamshed was on his way to become an engineer when he discovered his passion for music. Teaming up with Rohail Hyatt, Shehzad Hasan, and Nusrat Hussain, they formed the music band Vital Signs in 1986, at a time when there was no scene for music bands in the country. However, with their first song Dil Dil Pakistan, the band became an overnight sensation and Junaid Jamshed and his friends were elevated from nobodies to heartthrobs.

Being the lead singer of the band, Junaid Jamshed instantly became the poster boy for an entire generation of youngsters who followed him and his every move. He stayed away from controversies, appeared on TV shows, and talked about making the country proud, but while girls went crazy over his good looks, boys found someone to emulate. Many 90s musicians credit Music 89 as their inspiration where Junaid Jamshed and his band of brothers were the star attraction.

However, Shoaib Mansoor, the brain behind Music 89 had already taken Vital Signs under his wing, and wrote all of their songs in the first music album, except Dil Dil Pakistan (by Nisar Nasik) and Chehra (Parveen Shakir). The producer behind the resurgence of pop music on PTV in the 70s was also the person who took it forward in the 90s. Vital Signs gave hits after hits and inspired many to take up pop music and become famous.

While their first album released in 1989 featured classic songs like Yeh Shaam, Tum Door Thay, Samjhana, and Gori besides Dil Dil Pakistan, the second one began with Sanwali Saloni, then moved onto Mera Dil Nahi Available, followed by Tere Liye and featured Naraaz and Aisay Hum Jiyain, which was a tribute to Pakistan Air Force penned by their second most frequent collaborator Hassan Akbar Kamal. It took the band another two years to come up with their third album in four years and that cemented their place as the band of the 90s. After all, with hits like Aitebaar, Woh Kon Thi, Dil Dhoondta Hai, Yaarian and Yehi Zameen, they had left all competition behind.

The musical show Geetar ’93 further consolidated their status as the number one band in Pakistan, where most of the songs from their first three albums were filmed as music videos, and released only to make the band more famous. Junaid Jamshed then tried his hand as a solo artist, and with Shoaib Mansoor backing him, he went onto deliver as many as three hit albums between 1994 and 2002. His last album with Vital Signs came in 1995 with Hum Tum the album that featured Hum Hain Pakistani, a song that became a rage like all other patriotic numbers from the band.

It wasn’t his swansong with the band, for that came in the late 1990s, as Maula reunited the band for one last time, as well as the entire country due to its amazing lyrics penned again by Hassan Akbar Kamal. Before and after Maula, JJ delivered his first and second solo albums named Tumhara Aur Mera Naam (1994) and Us Raah Par (1999) which went onto become chartbusters back in the day. His final album Dil Ki Baat (2001) came out at a time when he was going through a religious transformation, and although it was liked by many, it didn’t get the attention it deserved, since JJ quit music as soon as it was released.

It was his voice behind the famous jingles of Oxford Sweaters, Nido Milk and Everyday Tea Whitener, and he even appeared in the commercial of the Tea Whitener with Mahnoor Baloch as well. However, his fans still remember Tumhara Aur Mera Naam, Baarish, Ab Jiya Na Jaye and Kayee Baar Aisa Laga from his first album, Aankhon Ko Aankhon Ne, Us Raah Par, Na Tu Aaegi and O Sanama from his second album and Tum Kehti Ho, Aankhon Ka, Aashna, Hone Ko Hai, Yaar, Dil Ki Baat and Intezaar from his final album, which is a proof that he was way ahead of his times.

It was during his final years as a pop singer that he turned to fashion designing and launched his own brand ‘J.’ which is currently regarded as one of the most popular retail outlets around the world. During the 90s, Junaid Jamshed was so busy that he had to divide his time between music and fashion. From performing in concerts to persisting with J., Junaid gave all he had to both the fields. It was because of his hard work and dedication that J. went on to become an international clothing brand, and is currently known as the number one kurta franchise in the world. He then ventured into the perfume industry and before his death, had launched the first celebrity perfume in the country, in association with his friend and cricket legend Wasim Akram.

It was the same Wasim Akram with whom he appeared in one of his most popular songs Tu Hai Kahaan where he collaborated with Haroon of Awaz and Strings, two bands who emulated the good work of JJ in the 90s. Many termed the Wasim Akram – Junaid Jamshed union as one of the best things for TV audiences in those days for they were both nearing the end of their careers, and had never collaborated in any way, before the song. After Tu Hai Kahaan, Junaid did release a few numbers but his heart had gone towards religion, and his mind was the only thing that kept him alive as a musician.

He began to drift away from music in the late 90s and left it completely after finishing his successful Indian tour at the same time as President of Pakistan, General Pervez Musharraf, in 2001 who went there to attend the Agra Summit. He spent time learning more about Islam and gradually drifted away from making music. After a gap of a few years he released a series of poems and praises for Prophet (PBUH) Jalwa e Janaan in 2005, which became popular and is still considered one of the most successful Nasheed albums from Pakistan.

He released a Nasheed album every two years and started delivering sermons as well, establishing himself as a popular religious scholar, and entrepreneur. Hs fans kept hoping that one day he would return to music, but he never did. It was during his return from a religious congregation that he met his maker on 7th December 2016, as the plane carrying him crashed near Havelian, Khyber Pakhtunkhwa, killing everyone on board. He left behind a void in the industry, however, he lives through his invaluable contribution, be it musical, religious, or patriotic.