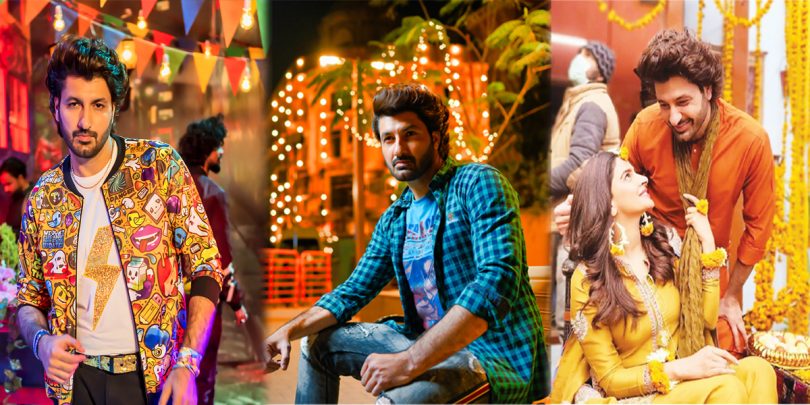 Shoulder: He might be making his film debut this Eid with Ghabrana Nahi Hai, but Syed Jibran has made a name for himself on TV

What do the upcoming Eid flick Ghabrana Nahi Hai, TV drama Jutt and Bond, Ranjha Ranjha Kardi and the famous restaurant 1969 in Islamabad have in common? Syed Jibran is the answer for he is the common factor in all these entities. Yes, the famous TV actor who played Bond in Jutt and Bond, stood against Bhola in Ranjha Ranjha Kardi and will be making his film debut this Eid is the man behind 1969 & Time Goes On, and Beef Lettuce Tomato (BLT) in Islamabad.

Not only that, he is a qualified doctor who now moonlights as an actor and an entrepreneur and does a good job as both. BOLD had a session with the Tarap actor who recently completed his 20 years in the industry and asked him regarding his choice to leave medicine for acting, venturing into business, and above all, going filmi opposite Saba Qamar and Zahid Ahmed. Here is what he had to say:

The accidental actor, from a family of doctors!

Syed Jibran comes from a family of surgeons and would have been practicing today had it not been for a silly wager with a friend. That one wager changed the course of his career and he turned to showbiz, leaving medicine behind forever. Model-turned-film actress Zara Sheikh played a huge part in this transition, not because they worked together but because she graced the billboard near Rawalpindi Medical College in the late 90s as the Jazz girl.

‘I still remember that my friends and I were all blown away by the beautiful Zara Sheikh who had debuted as the Jazz girl, and later went on to become a successful film actress. One day while we were just looking at the billboard (a usual practice during a break between classes), a friend of mine said that models and actors weren’t normal people, and I disagreed. He wagered that if I manage to become an actor, he would give me Rs. 100, and I accepted the challenge, considering Rs. 100 were a big thing for a third-year medical student in those days.’

According to Jibran, he went to Pakistan Television and introduced himself as a wannabe actor, not because he wanted to act but because he wanted to win (the wager). After spending a lot of time without any success, he was given a two-scene role in Taufeeq Hussain Shah’s Hook, from where he was picked up by renowned director Tariq Meraj.

‘Since I was quite good at memorizing medical terminologies when Tariq Meraj Sahab asked me to memorize a script for the audition, I did it in no time and that’s when he selected me as the young lead for his Eid play Dada In Trouble. And from there on, I became his pupil and whenever he did a play, I was in it, until I decided to explore myself as an actor and move to other cities.’

Syed Jibran says that when he was in his 3rd year at the Rawalpindi Medical College, he knew he might not pursue medicine as a profession, and that’s why he attempted acting since it paid well and made him famous among his friends and family.

‘In those days, Jutt and Bond was quite popular on TV where Ahmed Ali Butt played Jutt and Fawad Khan played Bond, and I used to wonder what it would take for me to be in a play like that. All it took was luck as unknown to me, Fawad Khan was taking a break due to his studies and the makers were on the lookout for Bond, and this is where I came in. I did the play for forty weeks and thoroughly enjoyed the experience working with Samina Ahmed and her team.’

As Jutt and Bond’s hold on his mind was weakening, Jibran eyed Karachi as the next destination, because it was where everything was happening. Luckily by that time, he had become a doctor but as he told his father, his heart lay elsewhere, and his father didn’t stop him from following his dream. As Jibran says, he came to Karachi as an outsider but the city embraced him so tightly that he hasn’t left since.

From being Bond to being Bad!

After playing Bond in Jutt and Bond and becoming a recognizable face, Syed Jibran decided to switch from sitcoms to proper dramas. He is glad that he met the right people at the right time who helped him become a better actor, as well as feel at home, otherwise, he would have left the field.

‘Whenever I felt that I wasn’t getting the kind of roles I wanted, something great fell in my lap and gave me the reason to stay in the field. Be it the respectful guy in Qaid-e-Tanhai, the antagonist in Chup Raho, the loving person in Ishq Parast, the angry elder brother in Ghairat, or the guy who angered the public by defying Bhola in Ranjha Ranjha Kardi, it has been a wonderful journey for me.’

On being asked why he plays the bad guy on TV, Jibran says that he likes characters where he has the margin to perform, be it a good guy or a bad one. He singles out Yasir Nawaz’s Khudgarz as the one play where he played the dutiful stepson, who died in the end, but that character left such an impact that had he not done it, he would have regretted it.

‘As for Sahir in Ranjha Ranjha Kardi, it was my decision to opt for the role where I had the chance to counter Bhola, despite having an idea that Imran Ashraf would become the character and bulldoze anyone who stood in front of him. That helped me raise my game and become so relatable that people started hating me, and if someone met me during those days, they would ask me why I left Noori and that we would have made a wonderful couple, despite knowing that it was only a play.’

He says that he tries to play different characters whenever he gets the chance, and his recent dramas Tarap, Safar Tamam Hua, Mohabbat Daagh Ki Soorat, and Aitebaar are proof of that. He hopes to continue playing ‘loving’ or ‘irritating’ characters on screen as long as he enjoys it, and as long as it gives him the satisfaction of fulfilling his passion.

Despite being tall, broad, and handsome, Syed Jibran took his time to enter the filmdom, and he will be playing one of the main leads in JB Films’ Ghabrana Nahi Hai opposite Saba Qamar and Zahid Ahmed this Eid. He is very excited about this venture where he gets to act opposite the best co-stars one can wish, dance his heart out and even throw a punch or two, something he doesn’t get to do on TV.

‘I wouldn’t be lying if I said that I wasn’t interested in films; who doesn’t want to see himself on the big screen! I even went to Mumbai a decade back to understand acting in films, how to pick a beat while dancing, and how to fight, something we aren’t taught in Pakistan. That training helped me a lot while I was doing GNH, and I am sure that when the audience leaves the cinema after watching the film, they will be smiling.’

Jibran says that when producer Hasan Zia offered him the script, he deliberately chose the role of Vicky because it was something he hadn’t done in a long time.

‘Although I began my career doing comedy roles such as Bond, I drifted to more serious roles as I matured as an actor, and as a person. However, with GNH, I finally got a chance to make people laugh, and trust me, the film is a laugh-riot where nothing is what it seems. If you think that you understand the plot after watching the trailer, then you are in for a huge surprise!’

Actor in Karachi, Entrepreneur in Islamabad!

Not many know but Syed Jibran was one of the first celebrities to become an entrepreneur and chose an ice cream parlor as his first venture, before moving into the restaurant business. The Islamabad people must thank him for bringing Gelato Affair to their city, a franchise that he managed for ten years before opening 1969 & Time Goes On and Beef Lettuce Tomato (BLT).

‘After I had settled in Karachi and was doing well as an actor, my friend and I had a chance meeting with the manager of Gelato Affair, the popular ice cream parlor. Like youngsters with money in their pocket, we spoke about the possibility of taking the franchise to Islamabad and after calculations, we decided to go ahead and opened the first branch of Gelato Affair in Islamabad.’

For ten years Jibran and his friend managed the franchise in Islamabad, and only decided to close it for better opportunities which came in the form of two restaurants that have now become famous for their food and theme.

‘Remember the venue where actress Ayesha Khan got married in Islamabad? The one with a dreamy setting for a wedding, and a picturesque background? That is 1969 & Time Goes On which was my first venture as a restauranter, and after its success, we decided to do something like BLT. While the former isn’t just an outdoor setup, it serves Pakistani/Continental food in a ‘60s themed indoor setting while the latter is pure continental with steaks, sandwiches, and burgers. It is the only place in Islamabad that serves the famous Karachi-styled Paratha Roll, so whenever you have a craving for that in the Capital, you know where to find one.’