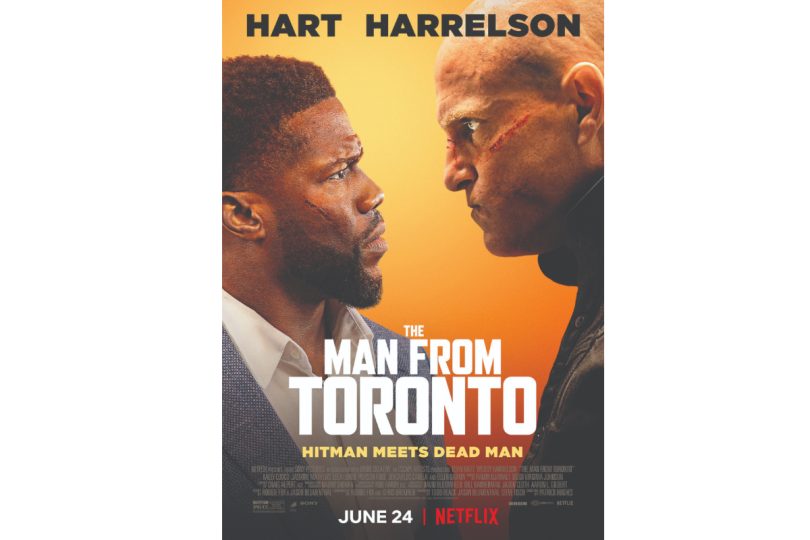 Veteran Hollywood star Woody Harrelson and comedian Kevin Hart are undoubtedly great actors, but their first flick together – The Man from Toronto – failed to do justice to their stardom. What began as an interesting flick faded away by the time the end credits started rolling, because of its predictable nature, repetitive jokes, and tried-and-tested plot. Call it the director Patrick Hughes’s fault for not trying anything new or the streaming service for greenlighting a lackluster script, The Man from Toronto could have been a contender, had the makers tried to be original instead of coming out as inspired.

Athletic instructor Teddy (Kevin Hart) is a failure at whatever he does; getting fired from his job on his wife’s birthday is normal for him and so is landing at the wrong place at the wrong time. When the FBI raids the place where expert hitman/interrogator ‘Man from Toronto’ was supposed to torture another man in captivity for information, they find Teddy and ask him to continue being their ‘Man from Toronto’. The reason behind such an unusual request was to foil an assassination attempt on the President of Venezuela, who was visiting the States for the inauguration of his country’s new embassy.

Trouble arrives in the form of the real Man from Toronto (Woody Harrelson) who decides to play along so that he gets the cash, without getting his hands dirty. He was counting on Teddy’s collaboration but when he finds out that the ‘Man not from Toronto’ is a loser, he becomes his mentor to get the job done. Together, the duo stands tall against a competing hitman, dodges Teddy’s wife (Jasmine Mathews) and her friend Anne (Kaley Cuoco), and stays away from the FBI who want to apprehend the Man from Toronto and save the world from destruction at the same time.

Watching Kevin Hart as a loser is a treat to watch and even in this film, he does the job like a pro. From the moment he is mistaken for a hitman to the time he realizes that he is stuck with the job, he displays the emotions of a failed person impeccably. He makes the ‘Teddy’ character his own in such a way that no other actor would have been able to better it. There are times when the audience cheers for him, hoping that he might do something uncharacteristically but he keeps the audience in suspense and remains a loser for most of the film.

There is a one-take fight sequence at the climax of the film that makes it worth any person’s while; it takes place at a gymnasium where the two leading actors throw everything except the kitchen sink at whoever is there to eliminate them. Due to the film being on Netflix, one can enjoy that scene over and over again and wish that more such sequences could have been made part of the flick.

The film’s script looks good on paper but reminds the audience of similar films in the last five years – The Hitman’s Bodyguard and Hitman’s Wife’s Bodyguard where the African American lead was the hitman, and the white guy was the one who was at the wrong place at the wrong time. Add to that list films the 90s classics Assassins and Rush Hour, and Dwayne ‘The Rock’ Johnson’s later releases Central Intelligence (with Kevin Hart) and Red Notice (with Ryan Reynolds) and you know what is going to happen, how, and when.

Also, Woody Harrelson as the title character was not the first choice of the makers – Jason Statham was. He was unable to create magic with Hart who had a cameo in Jason Statham’s Hobbs & Shaw and belongs to the same age group. The lack of chemistry was compensated for through forceful jokes and would have only brought a smile to the face of that audience who believe that being shot anywhere can be humorous.

Although the film features FBI agents in abundance, showing them as stupid was a wrong move, even if it meant glamorizing the leading cast. The same thing could be said about the casting of The Big Bang Theory alumni Kaley Cuoco who looked older, and nothing like Penny. It might have been a deliberate attempt on the part of the actress but she has so few scenes that anyone could have done it, and be forgotten before the credits.

The Man from Toronto seems like a film that takes place in the buddy-film universe that also houses Bad Boys and Rush Hour franchises. However, its lack of originality, mismatched casting, and inability to come out of the 1990s makes it a one-off flick and it doesn’t seem that it will have a sequel in the near future. A lot of things that happened in this film have happened in many films before, giving the audience nothing special to look forward to. Add to that its direct-to-Netflix release and it comes out as nothing better than the direct-to-video movies that have been making their presence felt since the 1980s.