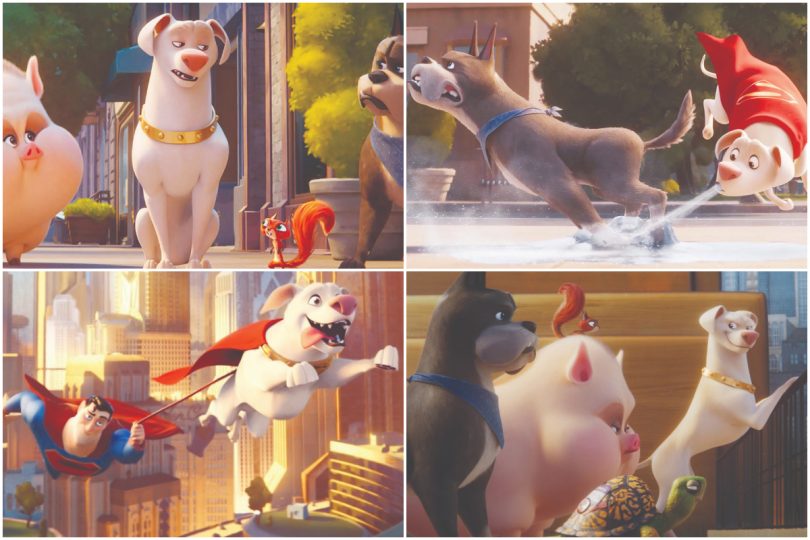 Who do you call when the superheroes are in trouble? Pets, their best friends!

Whoever says pets can’t be superheroes must go and watch the latest DC animated flick DC League of Super Pets where not only do the super pets save their masters, but they also save the world in style. At a time when standards of superhero films are going down, this animated spinoff might just turn out to be worth your time and money. Thanks to the brilliant animation and the all-star voice cast, including Dwayne ‘The Rock’ Johnson, this film is a treat for both the young, the old, and those in-between. It may not be the best-animated film from the world of DC Comics, but it surely is among the better ones.

Krypto aka Superdog (voiced by Dwayne Johnson) and Superman (John Krasinski) have a history not many people are aware of; he accompanied baby Kal-El in the rocket ship which brought him to Earth from planet Krypton and has been with him since. They have been saving the day (and night) on regular basis until one day, Superman decides to spend his life with Lois Lane (Olivia Wilde), making Krypto jealous and insecure. However, Superdog dismisses that notion once Superman and the Super Friends namely Batman (Keanu Reeves), Wonder Woman (Jameela Jamil), The Flash (John Early), Aquaman (Jemaine Clement), Green Lantern (Dascha Polanco), and Cyborg (Daveed Diggs) are in trouble and he has to lead a league of Super Pets to save them and the world, at the same time.

The twist in the tale occurs when Krypto loses his powers whereas the Super pets – Ace the Dog (Kevin Hart), PB the pig (Vanessa Bayer), Merton McSnurtle the Turtle (Natasha Lyonne), and Chip the Squirrel (Diego Luna) – acquire theirs, and while Krypto knows how to use powers, the rest don’t. They join hands to bring down the scheming guinea pig Lulu (Kate McKinnon), a former test subject at the laboratory of billionaire Lex Luthor (Marc Maron) who wants to carry on Lex’s dastardly plans. Will Superdog and his team be able to save the Justice League from losing their battle to Lex Luthor and his minions, or will they fail, watch DC League of Super Pets to find out.

Developing a character is always important, be it in a live-action flick or an animated one; in DC League of Super Pets each and every character that was minor in comics becomes major, and has qualities that make them ideal for a superhero adventure. Using the voices of Dwayne ‘The Rock’ Johnson and Kevin Hart for Superdog and Bat-hound was a masterstroke because of their near-perfect chemistry. They bring that flavour into this film as well where one voiced Superman’s mighty pet and the other was a stray who somehow got superpowers.

The rest of the characters and the voice actors selected were spot on as well; the turtle who runs as fast as the Flash, a sweet pig who adores Wonder Woman, and a red squirrel whom Green Lantern adopts make them the perfect version of Justice League’s pet division, or in other words, DC League of Super Pets. It’s useless to say that by the time they are through with saving the world, they are no more caged animals or strays because they have found their masters.

Add to that the training montage that could have been a little longer (they are gonna need a longer montage, as Krypto said) and an irritating protagonist Lulu (a tiny guinea pig, not a hamster) who wants to help Lux Luthor defeat the good guys, for good and you have a story that will keep you engrossed from start till finish.

Despite the juicy one-liners, the script of the film is pretty straightforward; there are hardly any twists and turns that will surprise the audience which makes it ideal only for a single viewing. It begins as a light-hearted film and ends like one, without giving the real superheroes and the supervillains a chance to flex their muscles. Also, some of Lulu’s ‘henchmen’ are lame – what else would you call a kitten who coughs up grenades, and a pair of guinea pigs that are literally fire and water!

And then there is the second Act that’s too slow, considering this is a film designed for kids, instead of adults who might end up liking it more. The action sequences could have been made better, and although the climax is good enough to be remembered for a long time, it came out as rushed. Keanu Reeves’ Batman was wasted because all he had to do was imitate the speaking style of Christian Bale from Christopher Nolan’s film series when giving the character his own voice would have been a better choice. And yes, some of the scenes were hilarious but then there were those that came out as forced, making kids believe that they are stuck in the wrong cinema.

DC League of Super-Pets is easily something that should have happened a long time back and deserves more sequels and TV shows than many DC animated flicks. There is no problem with the story but more time could have been spent on the script which came out as lacklustre. Until and unless the filmmakers behind the movie come up with a polished sequel or an animated TV series, this one-off film will go down as a ‘could have been a contender’. It felt more like a direct-to-video animated flick than one with a cinematic release because cinema demands more, something this film lacked. The star cast was there, and so were the characters but with a weak script, most of the good work went down the drain.