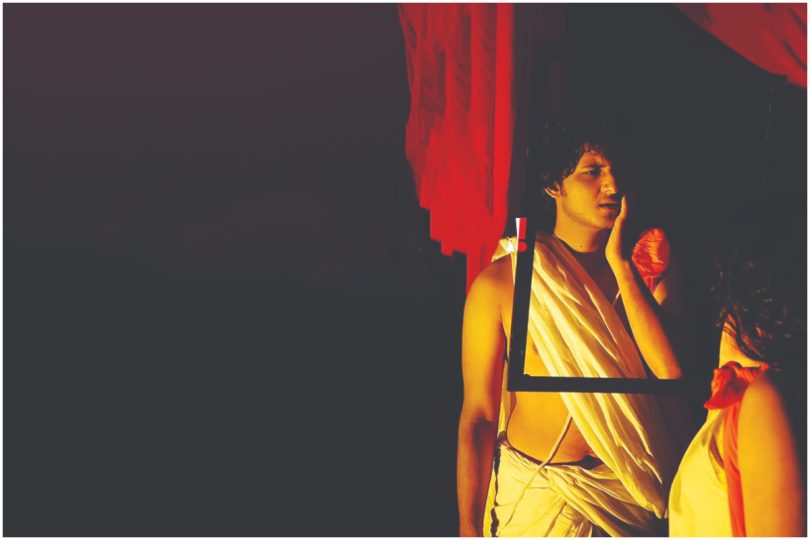 A good, entertaining theatre play is hard to find these days, one that doesn’t bore you, keeps you glued to your seats, and doesn’t let you take a peek at your watch. NAPA’s latest theatre play Betaali Prem Katha had all these qualities and came out as a breath of fresh air because of being an original play, for all ages.

Written and directed by NAPA alumni Fawad Khan (not the Humsafar actor!), the play is inspired by a tale from an ancient Sanskrit epic, Kathasaritsagara, that may date back to the 11th century but doesn’t come out as an old boring stage adaptation that might put the audience to sleep. Instead, it makes the audience laugh out loud throughout its two-hour run and with its hilarious twists and turns keeps them busy guessing as to what will happen, what might happen, and what could happen in front of them.

Betaali Prem Katha follows the story of a youngster named Prem (Rahil Siddiqui), a Brahman boy who leaves his home in search of knowledge and wisdom. Despite his father’s explicit instructions that he should not stop at a place named Roopnagar, he accidentally ends up in the city and meets a genie (Sunil Shanker) with magical powers who tells him that he will be in trouble if he catches a glimpse of the Rajkumari (Erum Bashir). However, it was love at first sight for both Prem and Rajkumari, and although Rajkumari spared Prem’s life, and he was asked to leave the city by her guard, he plans to meet her again.

Things begin to go awry when he asks a local baba (also Sunil Shanker, and sometimes Naveed Kamal) for help, and he grants him power that would give him both access to the Rajkumari, and not alert the guards. The power was to change gender at will, and become whatever he desires, whenever he desires. The hilarious situations that take place afterwards, land Prem or Premlata (Shabana Faizan) in trouble, depending on which person was in front of the audience and with which fellow character.

One must commend the writer/director Fawad Khan for keeping the narrative simple and not inserting an uncomfortable dialogue to force laughter. The script was so perfectly paced that not one sequence seemed out of place, not one actor out of character. Rahil Siddiqui and Shabana Faizan as alter egos of Prem seemed quite similar, and even spoke in the same way, adding credence to their characters. Their hilarious interactions with others were spot on, and the changeover was done so aesthetically that it deserves special mention.

Sunil Shanker’s Betaal also deserves special mention since he carried the play in as many as three different avatars. As the genie, he spoke his lines devilishly (while hanging upside down at times), and emitted vibes that even irked the audience. Since the story took place in magically-rich Roopnagar, and he was the narrator, he could change into the Baba or the Raja whenever he wanted. As the Baba, he was hilarious because he did what he thought was the best for himself, not the person who asked for his help, while as the Raja, he only did what he thought should be the best solution, even when it wasn’t.

Erum Bashir who played the Rajkumari looked gorgeous but also doubled as the costume designer, while Rao Jamal Singh Rajput did double duty both as a sepoy and as the assistant director. Supporting actors like Afrah Khalid, Samhan Ghazi, and Fahad who played Seeta, Balram, and the Minister respectively were no less important to the story since they didn’t let the audience lose interest when the main cast wasn’t on the stage.

Add to all that the live music by Ahsan Bari, and Bhagat Bhoora Lal and it was just magical, being there and listening to songs from the era in which the story takes place, without feeling disconnected. Some of the songs might even stay with the audience after they exit the theatre, such was the powerful impact of impressive vocals that aren’t found easily these days.

The sets designed by Tariq Raja were minimal at best, but kudos to the director for using the limited space to make the audience believe that they were at different places, without changing the background. The lighting done by Masood ur Rehman, and Obaid Iqbal was the reason why the actors were able to give their perfect expressions at the expected time and must be applauded for a job well done. The audience could feel the lightning strike, the thunder as well as the darkness in which some of the characters walked; to pull it off convincingly on stage is always a difficult task but here it was done effortlessly.

The worst thing about the play is that it will complete its run at NAPA’s Zia Mohyeddin Theatre on August 21, and for a play as entertaining as Betaali Prem Katha, it is indeed something to ponder. With Anwar Maqsood’s Sarhay 14 August being staged across the street at Arts Council, this NAPA play should take the initiative and extend the play’s run so that those who haven’t seen the play shouldn’t miss it just because they weren’t able to be at the right place, at the right time. Also, those who are unable to get tickets at the Arts Council for Sarhay 14 August could jump over to NAPA and get something worth their time and money.