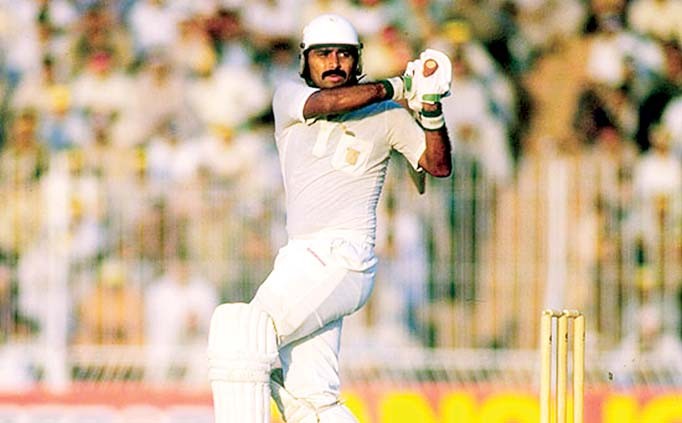 With the Asia Cup a few weeks away, Pakistan and India have begun renewing their rivalry especially after the two-time world champions lost to a spirited Pakistan side in Champions Trophy last year. The most significant part of this event will be the venue as Asia Cup returns to the very country where it began – the United Arab Emirates – and although no match is held in Sharjah, the memories are still there in the desert. Let’s go down the memory lane and come up with five memorable matches where the two teams battled their hearts out for supremacy.

In the opening match of the Rothmans Four-Nations Cup at Sharjah, Imran Khan destroyed Indian batting by taking six wickets for just 14 runs. The then World Champions were skittled out for just 125 runs in 43 overs with Azharuddin top scoring with 47. The combo of Ashraf Ali-Imran Khan was responsible for 3 wickets as the wicketkeeper did a fabulous job but Pakistan’s triumph was short-lived. Despite having Javed Miandad, Mudassar Nazar, Mohsin Khan and Rameez Raja in the side, the star-studded team batted like there was no tomorrow and was dismissed for just 87 runs in 33 overs. Sunil Gavaskar was the tormentor in chief for the Pakistanis as he ended with as many as 4 catches in the field including that of Saleem Malik and Javed Miandad.

In this mother of all clashes, Pakistan and India were on top of their game with India managing 245 runs for the loss of 7 wickets against Imran Khan, Wasim Akram and Abdul Qadir. Chasing 246 runs to win, Pakistan were reduced to 110 for the loss of 4 wickets and it was then that they began the real chase. Imran Khan promoted Abdul Qadir in the order who scored a 39-ball 34 to take Pakistan closer to the target; Javed Miandad did the rest as he batted in his usual calm style and hit Chetan Sharma for a last-ball six to earn Pakistan its first-ever trophy in a tournament involving more than 2 teams. Not only did he end the innings at 116 not out off 114 deliveries, he made Cricket lovers believe that there is always hope till the last ball!

Ahead of the 1992 World Cup, Pakistan and India clashed in familiar surroundings of Sharjah in the final of Wills Trophy. It was a match made memorable by Aaqib Javed who ended with bowling figures of 7 wickets for 37 runs. After Pakistan ended their innings at 262 runs for the loss of 6 wickets, thanks to Zahid Fazal’s unbeaten 98 and Saleem Malik’s 87, India began their reply disastrously. Not only did they lose wickets at regular intervals after a 32-run opening stand between Shastri and Sidhu, they lost 3 out of those 7 wickets in successive deliveries to Aaqib who bowled first change after Imran Khan and Wasim Akram. He accounted for Shastri, Azharuddin and Sachin Tendulkar on three balls to claim a star-studded hat-trick as India was dismissed for 190 runs in 46 overs. Two of the batsmen were run out in the innings while the other bowler to claim a wicket in the match was off-spinner Akram Raza.

Although India hasn’t been part of tri-nation tournaments in Sharjah recently, in what was one of their final appearances in the region, they fell prey to one of the best batsmen and the fastest bowlers in the world. First, it was Inzamam ul Haq who helped Pakistan post 272 runs in 50 overs; his contribution being 121 not out off 113 balls with the help of 5 towering sixes. Mohammad Yousuf also chipped in with a 64-ball 56 that included 5 fours and a six. In reply, India was never in contention with Wasim Akram, Waqar Younis and Shoaib Akhtar in full flow. In fact, it was Waqar Younis who ended up with 5 wickets for 31 runs as India managed only 174 runs for the loss of 9 wickets and was unable to find an answer despite having Ganguly, Tendulkar, and Dravid in the top order!