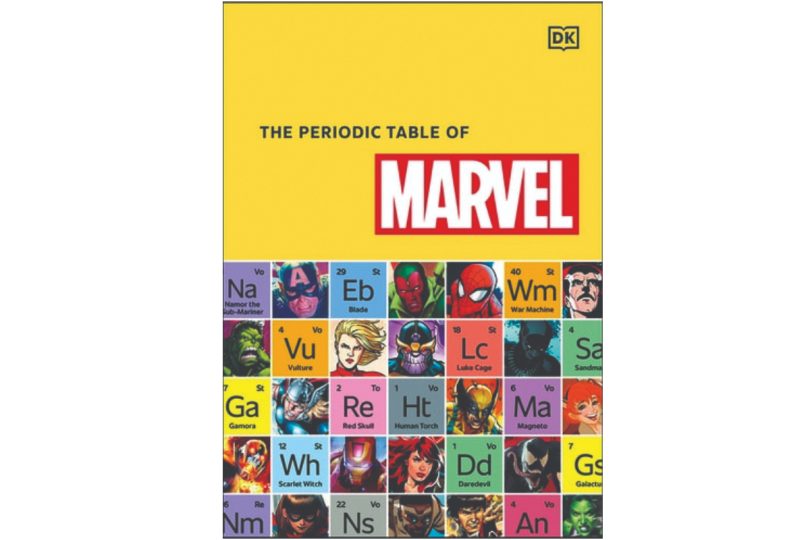 Know all there is to know about the major and minor characters in the Marvel Cinematic Universe through this ‘marvellous’ book.

The Periodic Table brings back the sweet childhood memories of studying in a school where knowing the properties of major and minor chemical elements was difficult for most students but easy for some. Through Melanie Scott’s The Periodic Table of Marvel, however, fans of the Marvel Cinematic Universe will get a chance to improve their knowledge of the good, the bad, and the ugly Marvel characters, and know their elemental properties for fun.

This book contains more than 130 character profiles of Marvel superheroes, supervillains, and supporting characters who help these two in their battles. Written by resident Marvel Melanie Scott in the style of the Chemistry Periodic Table, the book reveals the previously unheard-of connections between some of the characters, in such a way that you can both read it in one sitting or consult it when your heart desires.

There is a reason why this book has Marvel’s seal of approval, something that’s not available to other books revolving around Marvel characters. It expertly divides all major and minor MCU characters into different categories where they are bound with similar characters, irrespective of their heroic or villainous nature. Not only that, the author reveals the properties that bind these characters together and discusses why they have been chosen to stick together in one category and not in another one. All the characters are classified into 7 categories which are further divided into subcategories. For instance, Radioactivity will contain heroes and villains who were hit by Gamma radiations (led by Hulk), bit by a Spider (Spider-Man, of course!), or even developed powers after coming in contact with Waste (Daredevil comes to mind!).

That’s just the tip of the iceberg for the next six chapters take you on a fun ride where you will encounter characters that are classified as ‘Evolutionary Anomalies’ (Mutants like Wolverine and Professor X), ‘Interstellar Energies’ (Fantastic Four and Captain Marvel) as well as Chemical Reactions (where the First Avenger Captain America is mentioned alongside the most humorous character, Deadpool).

With Vision and Ultron making their presence felt in ‘Synthetic Life’, Iron Man and Hawkeye getting placed in ‘Peak Humans’ for their lack of superpowers, and Thor, Doctor Strange, and Black Panther finding themselves in ‘Extra Dimensional Forces’, this book does a huge service to Marvel Comics and it’s growing fanbase around the world. Even the latest Marvel TV shows like Moon Knight and Ms. Marvel are mentioned in these pages to give you the updated information that you want to know before committing yourself to those shows.

Characters in this book are accommodated as per their value in the MCU. Some characters, for instance, get a full two-page spread, others are restricted to just one page while many are cramped to one page with multiple characters. However, each entry is accompanied by a comic book panel that features the character’s image, its real name (if it has one!), its superpowers, its first appearance in a comic, and a summary that explores its origin, its relation to the category as well as its conclusion, if that character is no more alive.

There is a reason why Miles Morales (from the Spider-Man Into the Spider-Verse) is not in the same category as Peter Parker, or that Fantastic Four and Doctor Doom are placed so far from each other despite being close in reality. To know about the evaluation that landed these characters in their respective categories, you will have to know about the science-based aspects of these characters, as well as a little history of their origin.

What this book is missing is a giant periodic table enclosed separately or printed on the centre spread which has all the superheroes and supervillains mentioned so that one can stick it on the wall, or consult it on the go to remember the connections between many characters. Despite the wealth of information presented here, a lot is left to be desired since Agent Carter or later Captain Carter isn’t mentioned for some reason, and neither is Wong who took over as Sorcerer Supreme when Doctor Strange went missing.

What this book does manage to do is take the readers down memory lane and refresh their knowledge of their favourite and not-so-favourite characters. You might know that Ant-Man can alter his size, but do you remember that Stilt-Man is able to reach the height of 300 feet? You might be a fan of Captain America but what about Union Jack or Anti-Cap who have been classified alongside the Cap in the ‘Super Soldier Serum’ subcategory? From Mutants or Asgardians, Eternals to Celestials, Avengers to Inhumans, The Periodic Table of Marvel covers them all because they make Marvel, marvellous.

If you didn’t know why organizations like S.H.I.E.L.D. and teams like the Inhumans were created in the presence of the more successful The Avengers or the X-Men, and what is the difference between Venom and Anti-Venom, and that the current Nick Fury is the son of the original Nick Fury, then you need to brush your skills through this book. Otherwise, this guide will make your day and revise your interest in the Marvel Cinematic Universe that has been delivering since the early 1960s, when Fantastic Four kick-started the MCU. -Ends