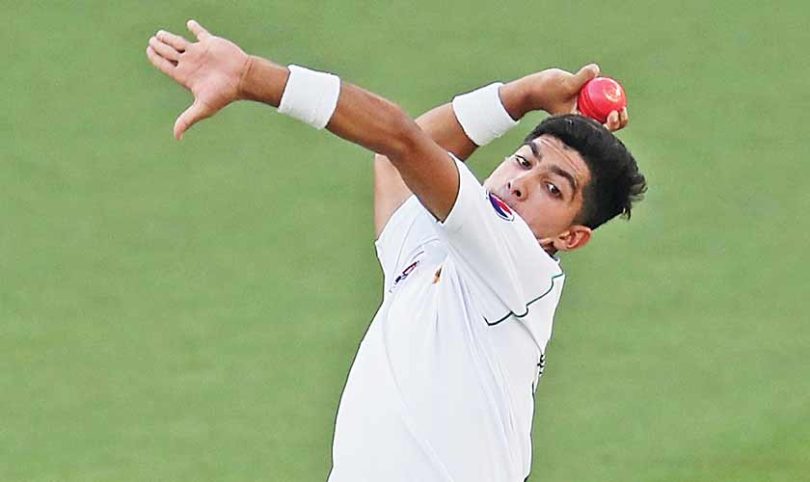 Never before had a sixteen-year-old taken a hat-trick at Test level, and Naseem Shah had that in mind when he was bowling the 41st over of the second innings of the first Test against Bangladesh. He was instrumental in sending Bangladesh towards a defeat as he took a hat-trick with the wickets of Najmul Hossain Shanto, Taijul Islam, and Mahmudullah off consecutive deliveries. From 124 for two, the tourists were five down for 124 within the space of three balls and Naseem Shah became the youngest bowler ever to take a hat-trick in Test history. He beat the record of Bangladesh leg spinner Alok Kapali who had taken a hat-trick against Pakistan nearly 17 years back, at the age of 19.

Imagine playing your first international match for Pakistan, and facing England in their backyard, and then batting at number three – too much pressure for any batsman. However, Haider Ali showed no signs of being under any pressure as he blasted his way to a 33-ball 54 in his debut T20I, hitting five fours and two sixes at a strike rate of 163.64. It was because of his knock that Pakistan managed to post 190 runs on the board for the loss of four wickets and then restricted the hosts to 185/8, winning the match by 5 runs!

Shaheen Shah Afridi had a brilliant 2020 as he emerged from a supporting bowler to the main strike bowler for Pakistan in no time. However, it was his 5/49 in the first ODI against Zimbabwe that would be termed as his best performance of the year. Chasing 282 to begin the series with a win, Zimbabwe were cruising at 240 for five in the 46th over. That’s when the captain Babar Azam handed the ball to Shaheen Shah Afridi who first removed danger man Brendan Taylor for a well-played 112, then accounted for Carl Mumba and Tendai Chisoro in his final over to snatch an unlikely victory for his country. His 5/49 may not have been enough to get him the Man of the Match award but it helped Pakistan begin the series in a dominating manner!

Iftikhar answers his detractors in style!

They called him Misbah-ul-Haq’s favourite, a good for nothing cricketer and a golden-oldie but Iftikhar Ahmed didn’t bow down to pressure at all. In fact, before his match-winning six against New Zealand in the third T20I, he had answered his critics with his 5-40 against Zimbabwe in the second ODI of the series. At one time when the visitors were cruising at 138 runs for the loss of five wickets, in the 30th over, it seemed that they will cross 250 in 50 overs. But Iftikhar had other ideas. He came in as a partnership breaker and then put a brake on the visiting side’s runs flow, dismissing them for 206 in the 46th over, taking as many as five wickets for just 40 runs.

He came, he bowled and he conquered; that’s the best way to describe Mohammad Hasnain’s career-best figures of 5-26 against Zimbabwe. Out of the six wickets to fall in the Zimbabwean innings, Hasnain took five with the remaining one going to Wahab Riaz. Not only did he remove the dangerous Brendan Taylor but also kept the visitors in check, ending the innings with an economy rate of 2.6 runs per over when all except Shaheen Afridi went for more than six runs per over. Pakistan lost the match in the Super Over but Hasnain’s five-for will go down in history as one of the best efforts from an emerging pacer very early in his career.

One year after the death of his legendary father Abdul Qadir, Usman not only made his international debut for Pakistan but also made his dad’s legacy proud. Not only did he end the T20I series as the top wicket-taker (8 wickets in three matches), he also bagged a Man of the Match and a Man of the Series award with his 4 wickets in the third T20I. He was the most economical bowler for his side giving 13 runs in four overs. He bamboozled the batsmen with his wrong-uns, flippers, and leg breaks, just like his father used to do