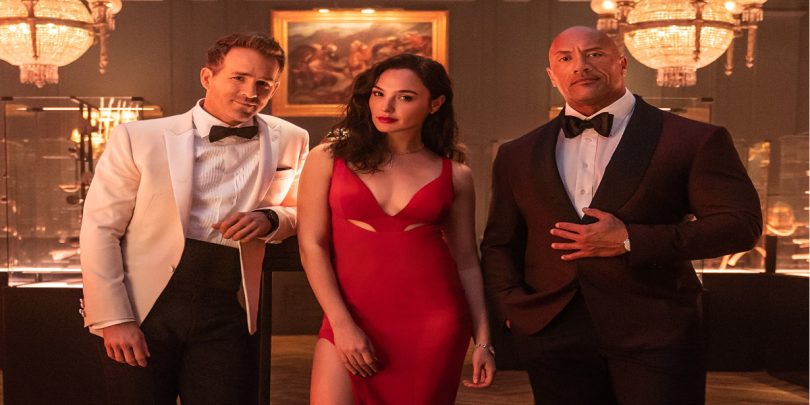 The Dwayne Johnson-Ryan Reynolds-Gal Gadot-starrer may be a Hollywood flick, but in spirit, it is more Bollywood than a Bollywood flick. That’s one of the reasons why people who have seen it have different opinions; some feel it is exactly the kind of film that Hollywood should produce so that the audience returns to cinemas, while others believe it looks more like an Indian film than an American one. None of the two parties is wrong, and they both have their reasons.

Before we debate on the brilliance or stupidity of Red Notice, let’s summarize the film’s plot. It was not much different from the heist movies that are being produced in the United States and featured a stellar cast as the main lead. Dwayne ‘The Rock’ Johnson plays FBI agent John Hartley who tracks down his nemesis Nolan Booth, played by Ryan Reynolds, after a chase that takes place across continents. However, when an acquaintance fails to believe Hartley, both the captor and the captive are sent to prison, where they meet the brains behind it all. When the brainy lady aka The Bishop – Gal Gadot – asks the men to help her so that she can get them out, they refuse and thus begins the cat and mouse chase that connects the three.

Do the boys succeed against the girl here or does the girl outwit the muscles with beauty, that’s something for the viewers to find out by watching the flick. However, it is the way that things work out that it looks more Bollywoodish than Hollywoodish. There are many (in fact, too many) twists and turns in the movie, but even that didn’t stop it from becoming the most-watched flick on Netflix. After all, had the cast featured lesser-known actors, not many would have even considered Red Notice let alone watch it. But since it featured the actors behind Deadpool (Ryan Reynolds), Wonder Woman (Gal Gadot), and the one half of Hobbs and Shaw (Dwayne Johnson), everyone with access to Netflix went for it and ended it, with either a good review or a bad one.

Why would one give a good review to Red Notice, you might ask? The film has everything a good action film does – it has car chases, action sequences, a trip around the world, and some of the best actors battling against each other. Dwayne Johnson brings his ‘smoldering intensity’ to the heist while Ryan Reynolds chips in with his quirky behavior. Since the two are facing the Wonder Woman of Hollywood, they are at their best with their ‘qualities’, although at times they lack the finesse of their female rival.

There are as many negative aspects of the film as positive ones; with a star cast to die for, the writer/director Rawson Marshall Thurber could have come up with an intelligent film instead of a run-of-the-mill flick. It gives a new meaning to the phrase ‘everything is not what it seems,’ since there is one twist after another in the plot. Most of the action sequences are either rehashed versions of what you have already seen or something from the golden book of Bollywood. From hacking passwords to draining bank accounts, switching sides to unlikely team-up, Red Notice has an abundance of everything that doesn’t make it watchable for the second time.

As for the actors, well the film belongs to its female lead Gal Gadot who looks good in every frame, in every avatar. The scene where she beats her co-stars to a pulp reminds the viewers that Gal Gadot is the Wonder Woman, but as The Bishop, she does nothing extraordinary. Except look beautiful of course! Dwayne Johnson is the person who is always on the right side of the law, while Ryan Reynolds is his exact opposite. However, the latter’s one-liners are what keep the viewers involved in the film, as he taunts others, makes fun of everyone he comes in contact with, and changes his stance according to the situation. There is a little of Indiana Jones and National Treasure in the movie but the resemblance is minute, and not box-office worthy, although the film has raked in dollars.

One thing that is certain about Red Notice is that be it on Netflix or in theatres, it is films like these that will grab the audience’s attention and invite them to a cinema. With the dismal box office results of The Last Duel and The West Side Story, the cinema dynamics around the world are changing and that’s why the demand for action flicks is increasing. Because in an action flick, you can rest your brain and leave logic aside, while in a thinking film, you are made to use your brain just like you do at work.  Red Notice is, without doubt, a one-time watch because it doesn’t leave anything to explore, and once the viewers are through with it, they are done with it.

Yes, the language of the film could have been less volatile, the daddy issues could have been explored or removed altogether, the writers could have played with the actors’ superhero alter egos, and strangulation, electrocution, and being poisoned could have been kept close to reality. Even then, it has all the ingredients of a successful franchise-in-the-making, but only if they improve the plot and execution instead of carrying on with the same style. No one remembers the second film in the Fast and Furious franchise because it was bad, but the series became popular once they discovered their direction. Red Notice will have to do something similar otherwise it will be labeled as a ‘has been’ or a ‘good on paper’ one-time flick in the future.