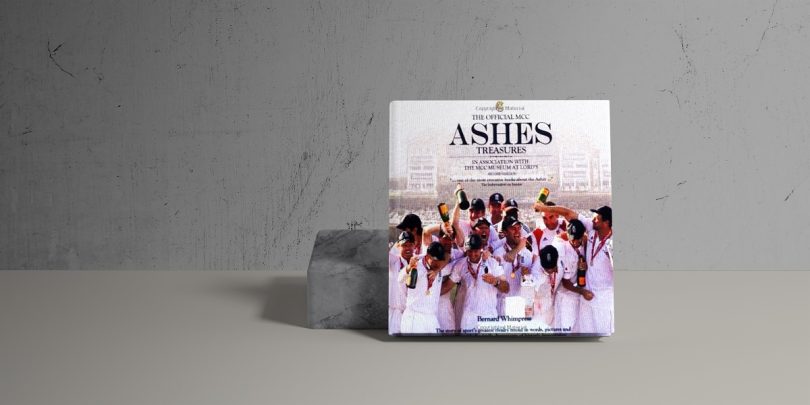 Some might feel that the history of Test cricket is as old as The Ashes, but trust me, once you are done with The Official MCC Ashes Treasures, you will realize that before the ‘England versus Australia’ matches were granted Test status, they were cricket matches between two countries.

Read how cricket evolved over the years around the oldest rivalry

Some might feel that the history of Test cricket is as old as The Ashes, but trust me, once you are done with The Official MCC Ashes Treasures, you will realize that before the ‘England versus Australia’ matches were granted Test status, they were cricket matches between two countries.

This guide covers that rivalry like never before and makes you go back in time, when life was simple, when cricket was a pastime and when the players were scoring runs and taking wickets without knowing that they were creating history.

Compiled by Australian historian Bernard Whimpress and with a foreword from Angus Fraser, who represented England against them, this book is literally a treasure-trove regarding cricket’s greatest rivalry.

The author couldn’t have done it alone and had help from MCC Museum at Lord’s, but what he came up with is the perfect way to celebrate cricket’s most fiercely contested series.

From the very first match played in 1876-77 till England’s dominating victory in 2010-11, these pages contain a history that is equivalent to Test cricket’s past in many ways.

Why is this book a purchase you will never regret, you might ask? Unlike other cricket books on Ashes, Pakistan – India rivalry, etc., this one just doesn’t have words, but much more.

Don’t be surprised to find never-before-seen photographs of the early days of Test Cricket but know all there is to know about Australian legends Victor Trumper, Sir Don Bradman as well as English giants Sir Wally Hammond and Sir Len Hutton.

To make this book look more ‘treasury’, the author has added removable facsimile documents that range from tickets to the stadium to posters welcoming the visitors, from the late 19th century, and the early 20th century. Interesting, isn’t it?

That’s not all, nearly every important Ashes Test is mentioned in this book and every instance from Sir Don Bradman’s decision to reverse the batting order to save his top-order to Dennis Lillee’s incident with the aluminium bat, gets a special mention.

Everyone knows that the Ashes is played every two years but not many realize that in the beginning, it was a once-in-a-four-year affair because of logistics issues. After all, Test Cricket arrived long before planes were invented, and if that doesn’t make you feel old, nothing will!

And then there was the strange case of the trophy which is the ‘urn of contention’ between the two sides if you get the pun. The real story (or stories) behind the tiny urn was also revealed in these pages, as is the biography of some of the players from both sides, who stood out during the tours.

From the series where Bodyline tactics were used to keep the Aussies from scoring freely to Sir Don’s revenge through ‘The Invincibles’, cricket as a sport before the 1950s is covered as if it happened seventy days back, not seventy years ago!

While the readers will celebrate cricket through this book, they will also realize how the two World Wars disrupted the game and took many cricketers with it, some while performing their duties as soldiers and some falling to incurable diseases of that time.

You will also get to read about Jim Laker’s All-Ten, the evolution of Cricket commentary, and the one-man Ashes where Botham and/or Flintoff took the game away from the opposition.

It also discusses the impact of Kerry Packer’s World Series on the Ashes, and on Test cricket, bringing unknown details of the scandal to the fore!

Not just that, many old and recent scorecards are placed in this book’s secret compartments that you will love, once you find them while reading it.

The Australian and English teams of each era are evaluated in these pages as well and the same can be said of the many controversies that took place between them.

If you think that Bodyline was the only controversial aspect of the Ashes, or that Australia have always been dominant in the series, then you need this book more than anything else in the world.

It would tell you about the mighty batsmen who came before Bradman, fierce pacers before Truman arrived, and the great leg-spinners that paved the way for a certain Shane Warne who bowled the ball of the century in the Ashes. In short, there is a lot more to Ashes than you can even imagine, and this book is the key to that untapped treasure!