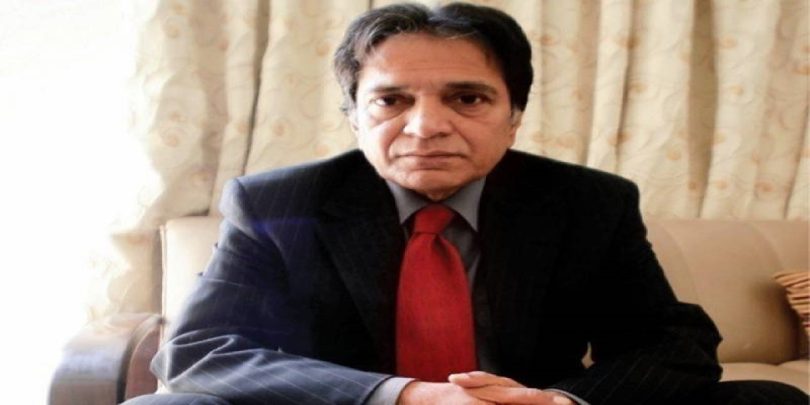 Pakistan has produced a great number of artists who have made Pakistan proud all over the world. Some have done well as an actor, others as comedians, and a few have made hosting their forte. However, there was only one actor who could be all three – actor, comedian, and host – at the drop of a hat, and excel in each one of them. His name was Moin Akhtar, and even ten years after his death, he is still alive in our memories.

For more than four decades, Moin Akhtar remained Pakistan’s number one comedian, host and impersonator, and would have been 71 on December 24, 2021, had he been alive. He passed away on April 22, 2011, but his skits, performances, and caricatures still go viral on social media. Many in India and around the world who discovered Loose Talk late, are still in disbelief that Moin Akhtar is no more. For them, whatever he says in the show is current, and his words will matter for a long time.

Moin Akhtar belonged to the generation that was born in an Independent Pakistan; Born in Karachi on December 24, 1950, he began his stand-up career with stage and Radio Pakistan while he was in his teens. On the first anniversary of the first Defence Day in 1966, he made his TV debut, and made it his home, exiting only when life deserted him more than 44 years later. During these years, he tried his hand at everything from compering, acting, mimicking, singing as well as interviewing renowned personalities, and excelled wherever he went.

What made him a standout comedian was his ability to mimic nearly anyone on the planet. He started by mimicking Hollywood star Anthony Quinn and followed it with an impersonation of the former American President John F Kennedy and other personalities. One just cannot forget his skit where he delivered a famous Sultan Rahi dialogue in the styles of Dilip Kumar, Mohammad Ali, and Nadeem Baig, that too in the presence of the three esteemed actors!

His jokes were not just hilarious but they usually came with a message, something that kept him in the business even after many copycats tried to take his place. He always lent a hand to struggling artists of his era, and the late Umar Sharif even acknowledged Moin Akhtar’s influence on him when he was sharing the stage with him a few years before Moin Akhtar’s death.

Akhtar remained an integral part of the Anwar Maqsood camp for the most part of his career. During the last eight years of his calling, Akhtar worked exclusively with Anwar Maqsood, as the two came up with a show Loose Talk, a softer version of BBC’s Hard Talk. It is said that Akhtar donned as many as 400 getups during the time he appeared on the show and did not repeat any performances, not even once.

And he did all that without changing a word in the script, which is something that made him a star in the eyes of his writers. Be it Manzar Imam who wrote the hit talk show Yes Sir No Sir where Akhtar sang, hosted, and appeared in parodies, Athar Shah Khan who wrote the TV serial Rafta Rafta or Kaif Rizwani who penned Family 93 in the 1990s, Akhtar always did justice to the scripts, regardless the medium and requirements.

He seemed more like the character when he appeared on TV, and at times a politician with no vision and integrity but his best performance came in Loose Talk where he played a Bangladeshi Cricketer, and even people from Bangladesh believed that he was not Moin Akhtar but one of their countrymen. Then there were his appearances on TV that went on to become iconic, such as the character in Eid Train where he played the wise man on the train.

After he debuted in films through Tum Sa Nahi Dekha (India) in 1974, Akhtar did only work in a handful of films. During the 1990s, he tried to make a comeback to films but he was never meant to be confined to scripts as he was a free spirited actor. He played the main lead in two films — Mr. K-2 and Mr. Tabedaar — which bombed at the box office, whereas Mohsin Khan’s debut Pakistani film Raaz remained his only successful venture.

Who needs films when you live in the hearts of a million Pakistanis anyway? After he co-hosted the TV show on PTV’s 20th Anniversary in 1984 and was the master of the ceremonies at the PTV Awards in 1986, Moin Akhtar became the ‘go-to host’ for any PTV show that was held in Pakistan. That didn’t mean that he was busy only as a compere; he was part of each and every episode of Anwar Maqsood’s Commercial Time and Show Time in the 1980s as well as Studio Dhai and Studio Ponay Teen in the 1990s, playing a different character every time he appeared on the screen.

From making fun of Talat Hussain’s style of acting to impersonating Zia Mohyeddin during PTV Awards, from making the audience cry with his performance in Anwar Maqsood’s long play Half Plate to appearing in different getups in the Studio series, there was never a dull moment for the viewers on TV when Moin Akhtar was in the show. No one can forget his brilliant performance as Rozee in the PTV long play that borrowed its plot from Hollywood classic Tootsie or his live performance in stage drama Bakra Qiston Pe that was penned by Umar Sharif where Moin Akhtar was part of an ensemble cast.

The legendary comedian was always there to make others smile with his clean humor, and quality one-liners. He was amongst those classy performers whose performance could be watched with the entire family, as he catered to everyone between the age of 8 and 88. His fans miss him and can pay tribute to his legacy by watching his work and admiring him just like they used to when he was with them in person.

It wouldn’t be incorrect to say that Moin Akhtar was an all-rounder when it came to showbiz. The late comedian was the master of ceremonies who could mimic any famous person in the world, act in comical skits, all while being one of the best actors on TV, even if it meant changing appearances. Although he had a career spanning 44 years on TV, they were some of his performances stood out that helped him become the man we all love.

Pakistan Television celebrated its 20th birthday in 1984, and directors Mohsin Ali and Shoaib Mansoor ensured that the occasion would be made memorable with grand celebrations. The who’s who of PTV were gathered from across the country’s five stations and ‘TV 20’ took place. Moin Akhtar hosted the show with Ghazala Qureshi and was on top of his game. Not only does the audience of those days still remember his interaction with his colleagues but also the jokes he cracked with the showbiz fraternity. It was this show that made him the most loved host of the country, and people started to notice him for his hosting skills, in addition to his ability to do comedy.

If a list is ever compiled of the best PTV Award shows, then the Awards of 1986 would undoubtedly be ranked on top. Held at the Liaquat Gymnasium in Islamabad, Moin Akhtar was the star of the show for he continued from where he left in TV 20. Partnered again with Ghazala Qureshi, he brought the house down with his antics, and his Neutral Umpire interview (with Saleem Nasir) is still regarded as a ‘way ahead of his time’ skit. In fact, his mimicry of renowned compere and international film star Zia Mohyeddin was the highlight of the event. It was so popular that after more than a decade, Bollywood actor Akshay Kumar copied that skit and changed it to ‘Yeh Zee TV Award Hai’, from Moin Akhtar’s ‘Yeh PTV Award Hai’.

Not many regarded Moin Akhtar as an actor, but he proved himself as a character actor in the late 1980s and the 1990s by performing well in PTV’s L long plays. No one can forget his brilliant performance in Manzar Imam’s Eid Play where he played the eccentric old man who thought of himself as the wisest person around, when in fact he was nothing of that sort. His antics, his interaction with his fellow passengers, and his now-famous letter to his wife have attained legendary status. After all, he was the first person in the world to address his wife as Noor Chashmi, because that’s what her name was. The play also featured Ghazala Kaifi, Ishrat Hashmi, Durdana Butt, Mirza Shahi, Nighat Butt, and Mahmood Ali, whereas it was directed by Qasim Jalali for PTV.

Although it was lifted from Dustin Hoffman’s classic comedy film Tootsie, Moin Akhtar’s Rozi became one of the most popular long plays from the 1990s. Written by Imran Saleem and directed by Sahira Kazmi, the play revolved around an out-of-work actor Haroon (Moin Akhtar) who gets selected for a role after he was ‘mistaken’ for a female actress. After ‘Rozi’ becomes a successful actress, the girl he loves (Fazila Kazi) befriends him, whereas the girl’s father (Hameed Wyne) falls in love with Rozi. Moin Akhtar played both Haroon and Rozi to perfection, and until the climax where he discloses the truth, everyone onscreen and off it, were in love with Rozi, as she stood for what was right, and didn’t let others including the director take advantage of the female gender.

What began as an experiment went on to become one of the most popular comedy shows in the country, and Moin Akhtar was responsible for that! In June 2002, Loose Talk – a satire-comedy talk show ‘loosely’ inspired by BBC’s HARDTalk, with Anwar Maqsood as host, and Moin Akhtar as the guest. Written and created by Anwar Maqsood, over 400 episodes of the show were aired before Moin Akhtar’s death in 2011, and he played 400 different characters in those episodes. In 2019, a Loose Talk clip went viral which led to its resurgence in India and Pakistan, eight years after Moin Akhtar’s death. Anwar Maqsood recently disclosed that he still gets messages from around the world regarding Loose Talk and Moin Akhtar, and he is thankful to the fans for keeping the show alive.