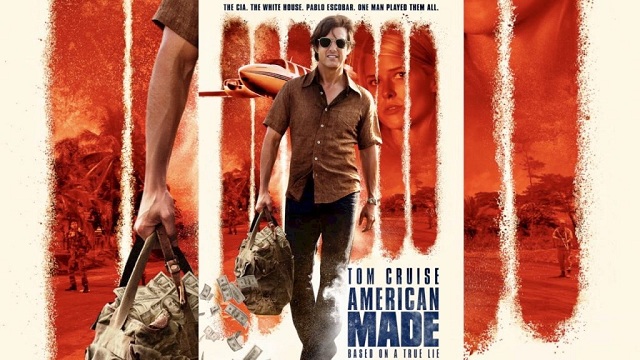 By: Omair Alavi After the failure of his rebooted The Mummy, where Tom Cruise played the man who defeats the Egyptian Princess by turning into a monster himself, the veteran superstar returns to play Barry Seal in American Made. The film revolves around the adventures of a real-life former TWA pilot who tried to make as much money…

After the failure of his rebooted The Mummy, where Tom Cruise played the man who defeats the Egyptian Princess by turning into a monster himself, the veteran superstar returns to play Barry Seal in American Made. The film revolves around the adventures of a real-life former TWA pilot who tried to make as much money as possible by helping the CIA, the Medellin Cartel, and the DEA all at the same time. The film brings Tom Cruise back to his roots – playing an American with no gadgets – and he does not disappoint.

Barry Seal (Tom Cruise) lived a happy life as a TWA Pilot in the mid-70s until the CIA recruited him secretly for foreign missions; Barry played both sides with Medellin Cartel and the CIA and made loads of money in the process. His constant struggle to please both the smugglers and his ‘employers’ landed him in trouble but instead of being sentenced to prison time, the American government decided to avail his services instead. How Barry Seal managed to please all sides is what the film is all about, watch it to know more about the secret agent who was never acknowledged.

At last, Tom Cruise plays a human character that neither had gadgets to help him out, nor he turned into a monster to save the world. He plays Barry Seal, a real person who had helped America and Drug Smugglers during the 70s and the 80s and amassed so much money that he ran out of place, and also of friends and people to trust. His portrayal of the character is one of his best works in recent times and he pulls it off brilliantly. Doug Liman’s direction was precise since he had to shoot an era where there were no home computers, no internet and above all, an America that had the tendency to help rebels more than the governments.

The Bad
In Pakistan, people will take the film as work of fiction when in fact it is not fiction but something that really happened. Besides Tom Cruise, the rest of the cast is virtually unknown in this part of the world and that will keep the audience away. The fans of Tom Cruise would prefer to watch the film at home when it is released on DVD because he doesn’t do any stunts in the movie, nor does he turn into a superhuman. The film’s biggest positive also turns out to be its biggest negative!

Verdict – 3/5
American Made is for those people who know the history of America and how the country helped the different rebel groups during the 70s and the 80s. Tom Cruise’s presence adds value to the narrative who always gives his very best despite being over 50. Yes, he does look like Tom Cruise than Barry Seal in most of the film but who cares … as long as he gets the job done.