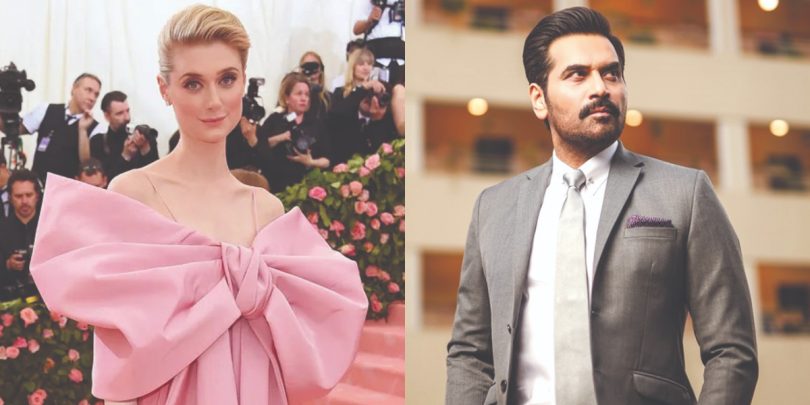 Karachi: With the arrival of the new year, came the breaking news that was unexpected, but welcome. Superstar Humayun Saeed was selected to play Dr. Hasnat Khan in the fifth season of Netflix’s series, The Crown, becoming the first mainstream Pakistani actor to go ‘Netflix’. Had he been cast in a lesser-known series, it might not have been a big deal, but The Crown is one of the most popular TV shows on Netflix, and it is viewed all over the world.

For those who have followed Princess Diana’s life, this is great news because not only Dr. Hasnat Khan was an honorable Pakistani, he was also the only good thing in the late Princess’s life, before it met a tragic end. It was Dr. Hasnat Khan who couldn’t marry Princess Diana because of her lifestyle and stayed true to his upbringing, something the current generation might not understand.

Humayun Saeed’s elevation to Netflix is a welcome step for Pakistan. Before him, Indian actors were cast as Pakistanis, and Money Heist and Squid Games are recent examples of that. The only things really Pakistan on Netflix are already-run TV dramas or documentaries related to the country, otherwise, Netflix doesn’t give Pakistan the importance it deserves.

Why is Humayun Saeed the best man to play Dr. Hasnat Khan?

As soon as word regarding Humayun Saeed’s selection for The Crown got out, social media became active and there were two kinds of tweets that were being posted. One was congratulating the veteran actor who has kept himself fit at 50, others were upset finding out that he is going to play Dr Hasnat in The Crown.

Those who were happy about Humayun Saeed’s casting shared pictures of Dr. Hasnat Khan and Humayun Saeed, and termed it a great selection. According to them, Humayun Saeed of 2022 resembles Hasnat Khan of the 1990s, they are more or less the same in height, share the same build and while Humayun Saeed might be a couple of years older, he can easily pass on for a middle-aged Pakistani doctor settled in the UK.

The problem with Pakistanis is that they can’t be happy in any scenario. Netflix has been promoting substandard Indian content (not all of it!) because they know India is a huge market, and Pakistanis could have only shown their anger had Netflix gone for an Indian actor instead of Humayun Saeed. If only Pakistani had known that Naveen Andrews played Dr. Hasnat Khan in Diana’s biopic Diana, they would have only welcomed Saeed’s selection for at least he looks the part. With this selection, Netflix has sort of opened a door towards Pakistan, and if Humayun Saeed manages to impress, as always, Pakistan might make its presence felt internationally.

Who is Humayun Saeed and why is his selection relevant?

Humayun Saeed is one of the finest actors produced by Pakistan in the last 25 years. He started his career at a time when Pakistan had just two TV channels – PTV and STN – and has held his forte in the new millennium as well. Not only that he is a successful TV actor since the mid-90s, but he has also forayed into production, making him undoubtedly one of the most influential personalities in Pakistan’s showbiz circuit.

For a journey that began as a second lead in an antiseptic soap commercial, Humayun Saeed has achieved nearly everything any actor can. He has worked with the finest playwrights, the best directors and shared the screen with legendary actors of the country as well as made his name internationally. His body of work includes some of the best dramas produced by Pakistan in the last 25 years, and although at 50 he might be past his prime as a  youngster, his experience is enough to help him ace any character that might come his way.

He made his presence felt in the 90s with Haseena Moin’s Janay Anjanay that also featured Talat Hussain, Nadia Jamil, Vaneeza Ahmed, and Asad while making the audience cry in Mehdni in the early 2000s. Be it the family drama Doraha in 2008 or playing a villain in Uraan two years later, returning to TV with Dil Lagi in 2016, or playing everyone’s favourite Danish in Mere Paas Tum Ho in 2019, he has always been on top of his game as an actor. That’s why when his name was ‘leaked’ as the potential Dr. Hasnat Khan in The Crown, everyone knew that merit was behind the decision, not social media presence.

Unlike his contemporaries, he kept the learning cap at all times and gathered whatever he could from the experienced directors at the PTV, and the newbies in the private sector, making a name for himself as an actor who could do both daring roles and pass on the baton when he didn’t fit the character himself. Not many know but it was Humayun Saeed who was supposed to play Ashar in Humsafar, a role that he passed on to a younger Fawad Khan who became a heartthrob after his performance. The character of Afzal in Pyare Afzal was penned with Humayun Saeed in mind, but he recommended Hamza Ali Abbasi instead, who went on to make a name for himself with that play.

Not only that, Humayun Saeed doesn’t miss much when it comes to production. Before he ventured into films, he remade classic Pakistani film Abhi To Main Jawan Hoon with Mikaal Zulfiqar in the lead, and after it did well as a telefilm, he produced Main Hoon Shahid Afridi in 2013, the project that kickstarted film production in the country. Since then, he has been riding high when it comes to films, and if you take a look at the highest-grossing films in Pakistan’s history, his name will appear in five of them. Four of these highest grossers feature him as an actor (Jawani Phir Nahi Ani 1 & 2, Punjab Nahi Jaungi and Bin Roye), while he made a guest appearance (Actor In Law) in one of them. Except for Bin Roye and Actor In Law, all the films in this list were his productions, making him easily the most successful actor/producer in Pakistan.

It was way back in 2009 that he appeared in a Bollywood film Jashnn as the main villain, but that wasn’t his first foray into India. Before that he worked as the main lead opposite actress Aamna Sharif in Ana in 2004, and with Nausheen Ali Sardar and Pooja Kanwal in Main Ek Din Laut Ke Aaoon Ga in 2007. So, playing a good inning in alien conditions is nothing new for him, for most of the shooting for Jashnn and Main Ek Din Laut Ke Aaoon Ga was done in India, while Ana was shot in the United Arab Emirates. Let’s see how he manages to perform in the United Kingdom, where the next season of The Crown would be shot this year.

Humayun Saeed’s elevation to the Netflix arena is a step in the right direction for Pakistan. Even if he doesn’t get more acting roles after his international stint, he would certainly make inroads as a producer with international producers. Since he is a thorough professional who doesn’t throw tantrums on sets, one hopes it’s smooth sailing for him, as well as for Pakistan. Those criticising his selection must understand that when a biopic on Princess Diana was released a few years back, they chose Naveen Andrews to play Dr. Hasnat, who neither resembled the good doctor nor was a Pakistani. Pakistan must unite to pray for Humayun Saeed’s success so that he can ‘confidently go, where no Pakistani has gone before.’