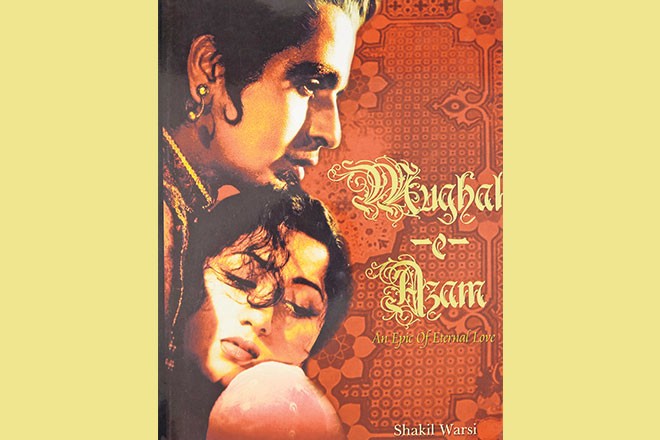 There is no bigger film in Indian film history than K. Asif’s Mughal-e-Azam and if you don’t believe it, you will turn into a believer after reading Shakil Warsi’s Mughal-e-Azam: An Epic of Eternal Love. The book describes the making of Mughal-e-Azam and how it came into existence after being shelved for various reasons. It not only takes you down memory lane but also helps you understand the obstacles the film’s director had to face during the shooting of the film.

We all know that Dilip Kumar played Salim, Madhubala immortalized Anarkali, Durga Khote as Jodhabai and Prithviraj Kapoor as Emperor Akbar in this eternal saga of love but this book goes back in time to tell you that this wasn’t the original plan. In fact, the film was conceived by Shiraz Ali Hakim (father of filmmaker Saeed Shiraz) and had cast Nargis as the courtesan who steals the prince’s heart. The film was shelved as Chandra Mohan (Akbar) passed away at 43 years of age and the producer migrated to Pakistan. Furthermore, the film’s director had rejected Dilip Kumar when his name came up in the initial list but when the cast was selected for the second time, the decision was flipped.

The book doesn’t just stop at the actors but takes you back to an era when professionalism was at its peak; we get to know that renowned playwright Imtiaz Ali Taj was the one who wrote the stage play on Salim, Anarkali and their love story that may or may not have happened in reality. Soon after, filmmakers wanted to redo the story for the screen and as many as three attempts were made before K. Asif decided to go ahead with his magnum opus in the late 1940s.

Be it the grand battle scenes, the seductive dances, the unspoken love sequence, or the unforgettable sound track, this book covers all aspects of Mughal-e-Azam. If you didn’t know that the film’s director signed Baday Ghulam Ali Khan for Rs. 25,000 per song at a time when Mohammad Rafi was charging 600 rupees or that the cinematography was hailed by international filmmakers, then this book will prove to be a treasure trove for you. Coloured photographs, as well as comments from the people present during the shooting, make it a wonderful collector’s item.

The book’s biggest drawback is the very boring first chapter that traces the history of Bollywood. The book actually starts from the second chapter, from where you get to know that producer Shapoorji Pallonji was not always happy with his director or that Dilip Kumar didn’t attend the film’s premiere as the director married his sister without his approval and that the leading stars of the film weren’t on talking terms at the conclusion of the shooting because of a court case.

Shakil Warsi’s book is significant because it also caters to the coloured version of the film that was released in 2004 and was even screened in Pakistan in 2006. It might not appeal to those who haven’t seen the film but a simple viewing might compel you to watch the grand film. There were as many as four prominent Urdu writers who worked on this film, one of the best lyricist was asked to pen the songs and a music composer who told the director that music is composed with heart, not with money. Such were the days; such was the time!