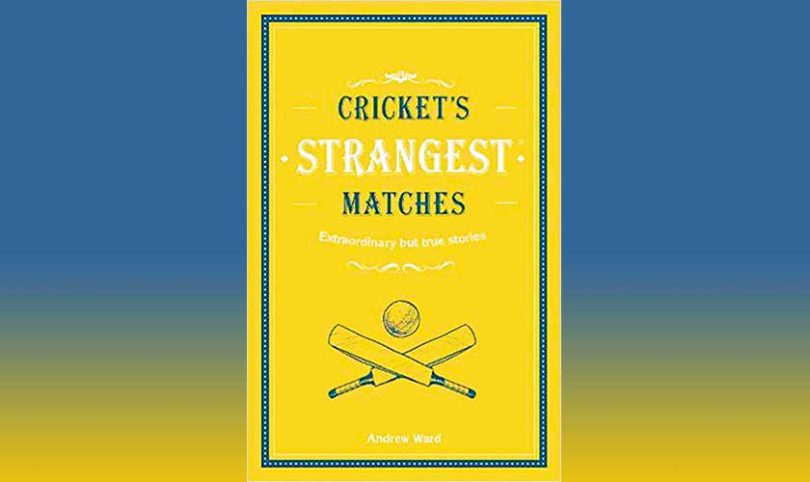 Read this book and you will become Master of the Game in no time, challenging your friends with trivia from their ancestors’ time, as well as their own!

If you thought that the World Cup grand finale last year was weird, the two T20 internationals between India and New Zealand last month were strange or the newest format of the game T10 is fascinating, think again. Cricket Strangest Matches brings to you a list of matches that were far more weird, strange and fascinating than all these matches combined.

Compiled by Andrew Ward, cricket finally gets recognized as a funny game through this book. What else would you say if you were told that the game of gentlemen was once played on ice, was once disrupted because of a leak in the dressing room and was even tried on sea (in a ship, of course!) once. This book is full of such comical but true incidents that originate from Australia to Pakistan, England to India and even at places that aren’t recognized as Test-playing nations.

It is also a treasure trove for those seeking most bizarre happenings on and around the Cricket stadium. You will have to read it to believe it – once two professional Cricketers took on a team of eleven amateurs; how a Captain devised a plan that ended innings before declarations became legal; why Hanif Mohammad was dismissed at 499 while taking a risky single and how Brian Lara perfected his technique during the tea break of his world-record first-class knock.

Add the complete details of the two Tied Test matches involving Australia, the first flood-lit Cricket match ever (and it came two decades before Kerry Packer revolutionized the game), the under-arm delivery controversy that saw Kiwi and Aussie PM criticize Greg Chappell, the resurgence of India through VVS Laxman and Rahul Dravid’s partnership after following-on against Australia and Kumar Sangakkara and Mahela Jayawardene’s world-record stand and you will not be able to talk about anything except Cricket for a few days.

The book doesn’t just discuss Cricket matches, it narrates the incidents as if the writer was present on the occasion. Be it a match played in 1857 or in 2015, involving amateurs, first-class Cricketers or Test players, this book brings it all to you as if it happened recently. There aren’t any pictures in the book but that’s a step in the right direction as that space is given to the scorecard of the match discussed in that chapter. And trust me, the image the reader creates in his mind while going through this book is priceless and better than any picture anywhere, let alone in this book.

If you don’t know how Sir Arthur Conan Doyle, the creator of Sherlock Holmes, fared during the Authors versus Actors match, what was the winning prize in the match between Smokers and Non-Smokers and why a first-class match lasted just 10 minutes, don’t be alarmed. Read this book and you will become Master of the Game in no time, challenging your friends with trivia from their ancestors’ time, as well as their own!