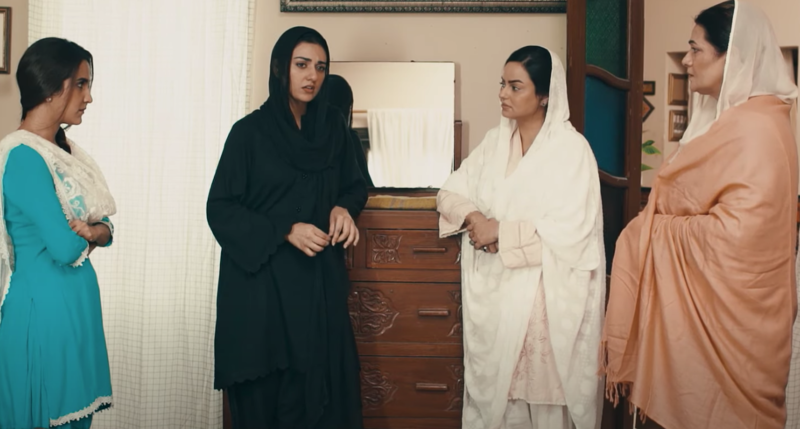 With one episode left, Raqs e Bismil is set to go out with a bang!

Writer Hashim Nadeem doesn’t adapt ‘go slow’ policy in whatever he does; be it making Abdullah: The Final Witness on a real-life incident, or penning Ishq Zah-e-Naseeb, he takes his work very seriously. In Raqs e Bismil, he took that seriousness to another level, when just before the final episode, he creates a conflict that will destroy the relationship between a devoted son, a once-upon-a-time proud father and the audience who want the play to end on a ‘happily ever after’ note. Will he dare to upset his viewers, and be ready to be banished until his next play is something only he can answer, till then all we can do is wait!

The Story – Pir Sahab wants Zari to marry the guy who reminds him of Moosa!

After Sakina (Anoushay Abbasi) finds out that Zari is Zohra, and Zohra is Zari, she immediately adds two and two and discovers that her mother-in-law (Nida Mumtaz) knows the truth, but is keeping it away from her husband. However, Sakina shares her new-found knowledge to gain the trust of her husband Essa (Momin Saqib), who immediately contacts his elder brother Moosa (Imran Ashraf) before it’s too late.

Saranga (Rashid Farooqi) advises Moosa to stay put and contact Zohra once her iddat is over, but even the know-it-all gangster has no clue that Moosa’s own father (Mehmood Aslam) wants his son’s beloved to marry an unknown guy who just reminds him of Moosa. With time running out, the ladies of the house ask Zari/Zohra (Sarah Khan) to reject the proposal, and wait for Moosa’s return, but she goes ahead and accepts the proposal for some odd reason.

Some plays are remembered for their closeness to reality, others make their way into the audience’s heart because of their brilliant writing and execution. Raqs e Bismil falls in the latter category where the combo of Hashim Nadeem the writer and Wajahat Rauf the director has done wonders. Not only have they presented a previously lesser shown side of our society on TV screens, but the amazing pace was also a lesson for other directors. Imran Ashraf and Sarah Khan carry most of the weight of the drama on their shoulders, whereas all the other actors put in their best to make the drama a success. For 27 weeks they grabbed the audience’s attention which is all set to go with a bang within one week!

Isn’t it now a known fact in the Pir sahab’s household that Moosa did not shoot the three guys because of Zohra, so why isn’t he being allowed to return? Seeing him with filmstar Laila (Zara Sheikh) might have been embarrassing for him, but that still doesn’t mean that he can banish him forever. Yes, Ahmed (Umer Alam) might remind him of Moosa, but he doesn’t know him that well that he can propose a union between a girl he doesn’t know and a boy he thinks he knows. Why hasn’t Ahmed objected to it is another question – doesn’t he have a life of his own? Why isn’t Essa (Momin Saqib) using his newfound respectability to convince his father that his decision might push his ‘innocent’ elder son further away!

The Verdict – Will Moosa end up with Zohra, or miss the bus, again?

Imran Ashraf has emerged as the quintessential good guy since Inkaar and he deserves to be happy in Raqs e Bismil where things aren’t happening as he expected. Yes, he didn’t get the girl in Inkaar but that was his own doing, however here he is on the right side, and still being ditched for someone who isn’t even comparable to Moosa. Hence his questioning Zohra’s decision makes sense!

With just one episode left, Moosa is likely to have a showdown with his father who still believes that his son has deviated from his teachings. Will Moosa be able to save Zohra from making a mistake again? Will his mother deliver a lecture that will melt her husband’s heart? Will his brother do the right thing and delay the wedding for he knows how much Moosa loves Zohra? It has all come to the final 40 minutes or so, which might make or break Raqs e Bismil. If it’s made, it will go down in history as one of the finest plays, and if it breaks, it will break a lot of hearts.