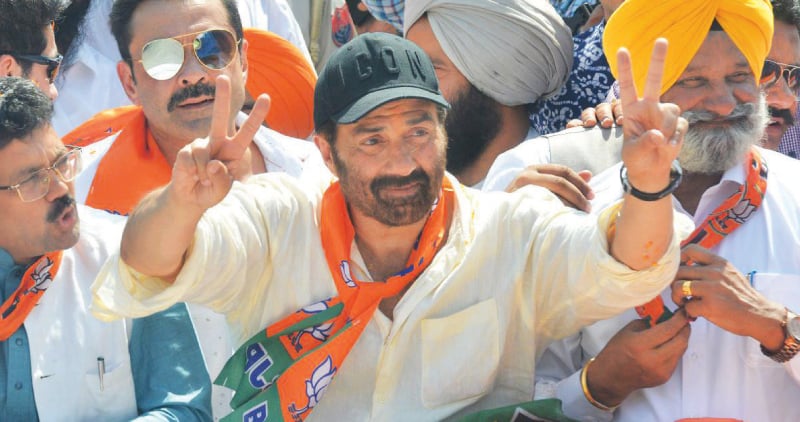 Sunny Deol, following in the footsteps of his father, actor Dharmendra, and stepmother, actress Hema Malini, ran for elections on a BJP ticket and won the Gurdaspur constituency in the Punjab | AFP

There would be no better time to read about film actors swarming into Indian politics than now, when general elections have just concluded in the largest democracy in the world. Rasheed Kidwai’s comprehensive Neta Abhineta: Bollywood Star Power in Indian Politics is about those actors who, on the basis of audience adoration and the trust placed in them by voters, have tried their muscle in politics. The book looks at how they managed to score in the field; did they pass or fail? Were they accepted by ‘competitors’ within their chosen party? Were they given preferential treatment for their star power? Ultimately, the book tells us how the relationship between politics and Indian cinema has panned out over the years.

Or at least, it tries to. Kidwai’s attempt is a fairly absorbing take on those actors and actresses who shifted boats when they were either instructed by their mentors, advised by political leaders or found acting offers decreasing. The analysis, at most places, is spot on, be it while discussing Vinod Khanna’s reasons for entering the world of politics, Shatrughan Sinha’s contempt for the unlawful or Amitabh Bachchan’s failure as an elected representative. The way Kidwai writes about these superstars, and others, shows that his grip on politics is strong and he knows the game — he is, after all, a journalist and political commentator with quite a few books on the subject to his credit. Unfortunately, it is when he tries his hand at exploring films that he falters.

Neta Abhineta — literally translating to ‘Politician Actor’ — could have been a winner had it remained on the path it was supposed to walk. Unfortunately, it tends to stray somewhat into irrelevant territory. All the actors mentioned in it were already quite well-known when they came out for their political innings, so there was no need to go into detailed biographical accounts of their lives before they turned politician, as the book’s audience would be more interested in their political, rather than their film careers. For instance, everyone knows about the Dilip Kumar-Madhubala affair that ended in tears. Bachchan and Rekha’s closeness is common knowledge as well. Details of Dharmendra’s first marriage are nothing new and neither is the fact that Rajesh Khanna entered politics mainly because film offers for the ageing actor had more or less dried up. Such details could have been left out at no great loss to the readers.

A new book explores the nexus between Indian politics and Bollywood

Pages given to actors whose political forays were too brief to make much of an impact — Moon Moon Sen, Mithun Chakraborty and Govinda, for example — could also have been better used had Kidwai spent more time on details that readers did expect, such as Bachchan’s involvement in the Bofors weapons-contract scandal, or how Rajesh Khanna ended up losing his first election despite leading at the time of the count. Instead, Kidwai plies readers with details of Nargis and Khushwant Singh’s first meeting, why Sunil Dutt refused to cremate his wife and why Sanjay Dutt couldn’t become a politician despite having politics in his blood.

The author makes many ‘filmi’ errors that could have been prevented had he consulted a film journalist or did more thorough research, rather than merely going with his gut. For example, he writes that Bachchan and Govinda worked together just once in Bade Mian Chotay Mian, totally forgetting that they had been in Hum before that. It is not as if this were a small film that slipped away unnoticed; Hum was a blockbuster that earned Bachchan a Filmfare award for Best Actor in 1992. In another erroneous statement, Kidwai writes that Shatrughan Sinha was cast as Jai in Sholay, when it is well-known that Sinha was only considered, not finalised, because Dharmendra put in a good word for Jaya Bahaduri’s beau.

However, even with these gaffes, it doesn’t mean that Neta Abhineta is a useless book. It’s interesting to learn about the political affiliations and trajectories of Bollywood’s original superstar trio comprising Dilip Kumar, Raj Kapoor and Dev Anand. For example, while the ‘King of Tragedy’ (Kumar) never contested elections, he did serve as the sheriff of Bombay [Mumbai]. Anand, meanwhile, did run for power, but it backfired badly, and as for Kapoor, he nearly cast former Indian prime minister Jawaharlal Nehru in a film.

On the film front, Kidwai’s discussion of Nehru’s influence on the early films of independent India, the rediscovery of Mohandas Karamchand Gandhi as a film icon and Nargis’s closeness with Indira Gandhi is interesting as this fits the book’s character. Also interesting is his exploration of why Dilip Kumar played just one Muslim character — Prince Saleem in Mughal-i-Azam — during the course of his entire career as a means of self-preservation, yet refused to return the Nishan-i-Imtiaz bestowed upon him by the government of Pakistan despite the wrath of his old friend, the vehemently anti-Pakistan, Bal Thackeray.

The author may have been wise in categorising actors, thus making it easier for readers to pick who they want to read about, but it must be admitted that once the big names are done with, the book loses much of its steam. The first few chapters discussing Indian film history and the last ones about lesser known actor-politicians are rather yawn-inducing. It is only when you read about the big names that things brighten up. Kidwai’s dissection of Sunil Dutt’s ability to be the only actor to earn respect from all parties is worthwhile, as is the disclosure that Sonia Gandhi stayed at Bachchan’s place before marrying Rajiv Gandhi and regarded Bachchan’s mother Teji as a maternal figure before relations became tense between the two families. In fact, so close were the two families that when Indira was assassinated, it was Teji who picked Rajiv’s children from school and brought them to her home because Rajiv was out of the city and Sonia was with her deceased mother-in-law’s body. When Rajiv was assassinated, it was Bachchan who handled the funeral proceedings even though relations had soured between the two men in the aftermath of the Bofors scandal. It is also revelatory when Kidwai writes that the picture of a smiling Rajiv casting a vote in the presence of his party’s candidate Rajesh Khanna was the last picture ever taken of the former prime minister, as he was assassinated just a few days later.

Although there is a fair bit of rehashing of known information, such as Vinod Khanna’s controversial exit from films in the early 1980s for religious reasons, the book also brings up some facts that may not be widely known, such as Mithun Chakraborty’s Naxalite past. However, discussions on some counts are sorely inadequate. For example, surely Kidwai could have done a better job explaining how Dharmendra managed to contest elections despite being married to two women at the same time, which is not permitted in Hinduism; the explanation regarding his conversion to Islam for marriage and the existence of a nikahnama is not that solid. Oddly enough, there is no mention of it when Kidwai writes about Dream Girl parliamentarian Hema Malini, who denied converting to Islam at all or changing her name to wed the already-married Dharmendra.

The reviewer writes on film, television and popular culture