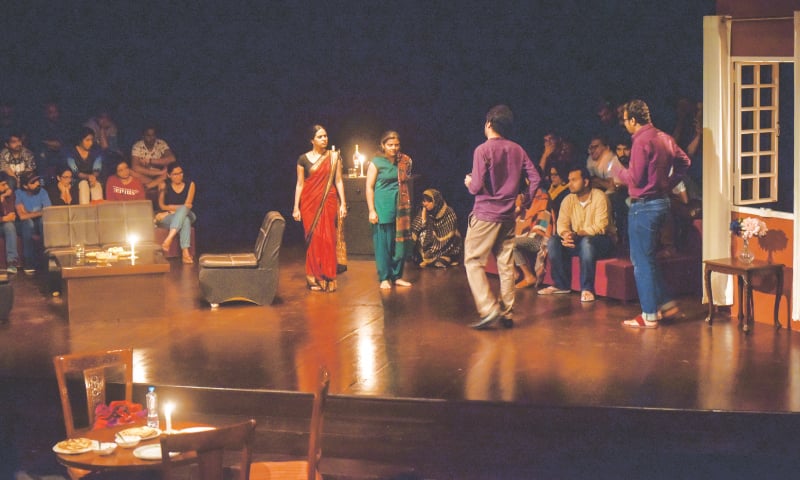 A SCENE from the play staged at Napa.—White Star

KARACHI: The National Academy of Performing Arts’ (Napa) theatre festival ‘Jashn Sahwan Ka — a Festival of Contemporary Theatre’ kicked off on Thursday evening with Fawad Khan’s play Lights Out. The drama is an adaptation of a play written by Indian playwright Manjula Padmanabhan in 1984 but still seems relevant to the Pakistani audience.

The drama revolves around a young couple Laila and Rahat (Kiran Siddiqui and Samhan Ghazi) who live in an apartment complex with their kids. Their constant companion seems to be ‘the screams’ from the outside that disturb Laila, while Rahat doesn’t seem to mind them as much. When their friends (Farhan Alam, Kulsoom Aftab, and Measam Naqvi) visit them, they also become part of the discussion regarding the happenings behind the dreadful screams.

One friend is of the opinion that nothing should be done, another believes that strict action must be taken. In fact, the opinion shared by Laila to call the police comes under discussion as well, since she considers it a matter of life and death.

Play highlights our insensitivity in the face of a sensitive issue

The discussion on stage might shock some in the audience, but it drew a few laughs as well. What it highlights is our insensitive approach regarding a sensitive matter as we would rather talk about some injustice than act to prevent it. It puts the spotlight on our apathy and reluctance to do anything unless it involves us directly. It is based on a real incident that took place in Mumbai’s posh locality of Santa Cruz in 1982, but even after three decades, it seems like something that has happened recently.

As for the performances, Kiran Siddiqui and Samhan Ghazi carry the play on their shoulders with the former acting scared, the latter being fearless for the sake of his family. The entry of Farhan Alam’s Danish makes the play all the more interesting as till then, no one had any clue what they were talking about. His discussion with Samhan Ghazi is hilarious, because a) the audience doesn’t know the background and b) imagination of both on-stage actors and audience seems to be in sync.

However, the play becomes serious with the entry of Kulsoom Aftab’s Nena who acts as the only person who cares about what is happening outside. Farhan and Kulsoom’s expressions are priceless as they make the audience guess what’s going on beyond the window. Measam Naqvi’s Sikandar comes with what he terms a realistic approach and makes the discussion of ‘what to do next’ all the more interesting. The audience has to wait till the final scene to understand who wins the discussion and how Lights Out ends.

And before you think about the name of the play, it is important to the situation as most of the discussion takes place under candlelight or in near darkness, for safety reasons.

The folks at Napa must be commended for a job well done.