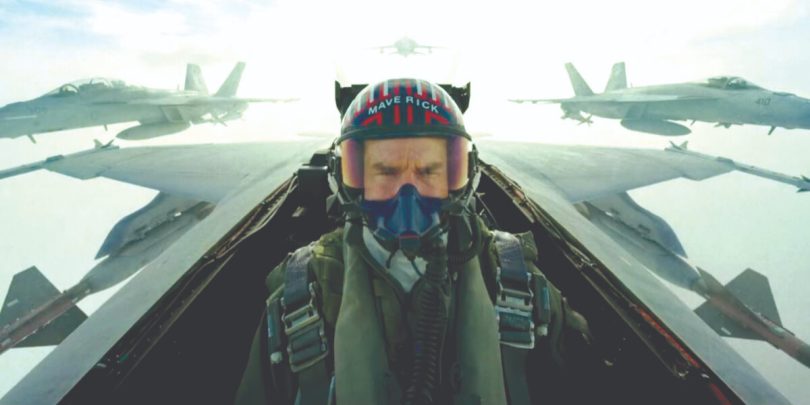 Irresistible dogfights, ‘mission impossible’ feel, and an ageless Tom Cruise ‘take my breath away’ in this blockbuster sequel

Hollywood’s always-young fighter pilot Pete ‘Maverick’ Mitchell returns with Top Gun: Maverick, a sequel that flies past the original with flying colors. Not only do the nail-biting aeronautics, the emotional sequences, and the ‘mission impossible’ feel help it become Tom Cruise’s best-opening flick ever, but it also makes Marvel films look like ‘cartoons’ in comparison.

When the original Top Gun came out in 1986, it was considered a recruitment advert for US naval aviators at first but not only did it become a high-grosser at the box office, it went on to inspire a TV series JAG in the States, and even one in Pakistan – Shehpar. However, thirty six years later, Tom Cruise hasn’t changed, and neither has the audience’s appetite for good cinema, which was evident in the way they thronged the cinemas to watch their favorite captain in action.

Compared to 1986, everything in the new Top Gun flick has become better, bigger, and more ambitious. Be it the opening shots of planes taking off from an aircraft carrier to Tom Cruise’s look and the background score, everything takes Top Gun: Maverick to a new level. The strains of Kenny Loggins’s Danger Zone kick off the movie in a style that keeps on getting better and better with every passing minute. Every scene is so well-knitted with the next one that you don’t feel like looking at your watch or taking a break in the middle.

The story revolves around Pete ‘Maverick’ Mitchell (Tom Cruise) who is sent back to the very institute from where he graduated as a punishment, but the rebellious fighter pilot takes it as a challenge. He has his concerns over the selection of ‘Rooster’ (Miles Teller) who is not only his dear friend ‘Goose’s kid but also someone he considers very dear to him. When the details of a near-impossible mission are shared with the best fighter pilots in the world, they all forget their differences and learn the tricks of the trade under Maverick.

Does the mission end in a success or not, that’s for you to find out. What I can tell you is that the jacket, the aviator shades, and the bike are there even after 36 years, that too in prime condition. Add to that the ‘need for speed’ and some well-executed action sequences in the air and you have a blast from the past, waiting to take your breath away, again!

Top Gun: Maverick is at times predictable but in a good way; Tom Cruise’s character trashes the rulebook because he feels the enemy might have read it, he tells his team that they don’t need to think when in the air and defeats them in a dogfight training sequence just like he was defeated in the original flick. The scene where ‘Rooster’ (Miles Teller) sings Great Balls of Fire on the piano, sending Maverick back into the past, is well-executed and brings forward the uncanny resemblance between Anthony Edwards’s Goose and his on-screen son to the fore.

Despite throwback references to the original, this film exceeds all limits, especially in the aerial photography department. Tom Cruise, who is famous for doing his own stunts, doesn’t disappoint even in this film where he flies multiple planes including fighter jets, and makes his fandom proud. Everything from the Cobra Maneuver, the Inverted Maneuver, and the dogfight with the fifth-generation fighter planes are so well done that you feel like watching them again, and again.

The film belongs to Tom Cruise who is there in ‘nearly’ every scene; he is rebellious-yet-caring, tough-yet-accommodating, mature-yet-cool and keeps his emotions in check, except for in one scene. Seeing him unable to stop his tears from flowing down his face is something many wouldn’t expect from the forever-action hero but he breaks all barriers, like his exploits in a fighter jet.

Miles Teller is a close second for he is the link between the past and the future, whereas Tom Cruise is the present. His uncanny resemblance to his on-screen dad played brilliantly by Anthony Edwards impresses the audience as does Val Kilmer’s cameo, considering the actor who played ‘Iceman’ in the original has been suffering from throat cancer for the past few years. While Glenn Powell reminds the audience of the young Maverick from the original flick, Lewis Pullman, Monica Barbaro, Jon Hamm, and Bashir Salahuddin keep the audience engaged with their powerful performances.

One must commend the way Jennifer Connelly’s character ‘Penny’ is inserted in the screenplay; the last time she looked so graceful and attractive was in A Beautiful Mind and that was more than two decades back. She brings Maverick back to reality when all seems lost and is one of the most important aspects of the plot. Had it not been for her character, Top Gun: Maverick might not have been as interesting and beautiful as it turned out to be.

Top Gun: Maverick is director Joseph Kosinski’s best effort so far despite directing Tom Cruise in Oblivion before. He made his debut with Tron: Legacy which came out 28 years after the original Tron. Here he betters that ratio with a 36-year gap between the two Top Guns and leaves a mark with exactly the kind of flick the fans were expecting. Go to the cinema with your friends and be ready to punch the air, high-five your friends, and cheer for the good guys, while Tom Cruise makes you realize why cinema is still better than OTTs.