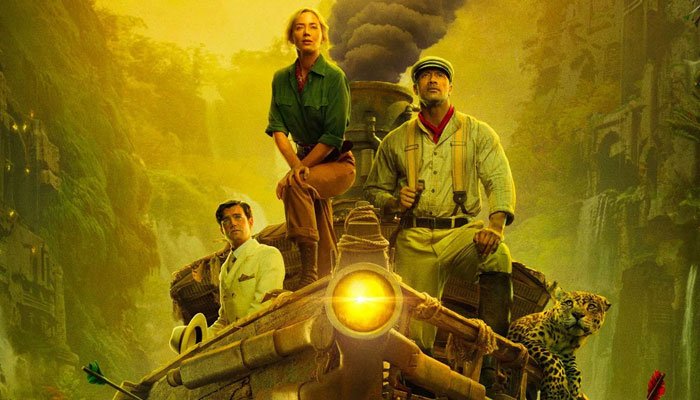 The Dwayne Johnson-Emily Blunt starrer is an old-fashioned, adventure flick that caters to both young and the old. PHOTO: IMDB

Disney’s Jungle Cruise is finally out and just like it battled production delays due to Covid-19, it fights paranormal elements to do what any Disney film does best – entertain people of all ages. Made as a way to publicize a Disneyland theme park ride on the lines of Pirates of the Caribbean, this film comes out as a tribute to The African Queen (released in 1951), The Mummy franchise of the 1990s, and Indiana Jones films, and doesn’t disappoint at all. After all, it has everything in an adventurer’s checklist from a steamboat ride, a noble mission, and Dwayne ‘The Rock’ Johnson leading the way while avoiding both the dangerous creatures and the supernatural powers in the Amazon River.

Directed by Jaume Collet-Serra, Jungle Cruise revolves around a botanist Dr. Lily Houghton (Emily Blunt), and her wisecracking steamboat captain Frank Wolff (Dwayne Johnson), who go on a journey into the Amazon, without realizing that safe return would be only one of the many options if they venture deep into the jungle. Accompanied by her brother MacGregor (Jack Whitehall), the trio decides to visit the ‘green hell’ after Lily’s attempts to convince the world of a magical treatment are rebuffed by all.

Like Brendan Fraser’s The Mummy series from the late 1990s to the early 2000s, which basically introduced The Rock as ‘The Scorpion King’, Jungle Cruise is a fantasy adventure story from start to finish. You will find everything from cannibals to conquistadors, ancient curses to immortals, and a mythical Tree of Life in it, placing it in the list of movies that are acceptable to people between eight and eighty. Yes, the script might not offer something that you haven’t seen before, but it is good enough to cater to a family that hasn’t been to the cinema since March 2020.

With well-carved characters, interesting twists, and well-intended puns, Jungle Cruise comes out as a safe bet. Both Dwayne Johnson and Emily Blunt have all the margin in the world to showcase their talents which they do as Frank Wolff and Dr. Lily Houghton. Set in the 1910s, the film tackles issues like considering women inferior and presents the female lead as a progressive individual, who wants to make a mark in the man’s world, even if she has to ask another man for help.

That other man – Dwayne The Rock Johnson, of course! – has a secret of his own, and only takes her passenger seriously after realizing that she might be after the same thing as him. Yes, the antagonist Prince Joachim (Jesse Plemons) might come out as a bumbling fool, but he is presented as an entertaining guy who talks to bees and wants to beat Lily for his own selfish gains. Even his subordinates doubt him but since he is more influential than them, they have to listen to him and disregard his idiosyncrasies.

However, the most laughs and applause in the theatre were reserved for Jack Whitehall who plays Lily’s brother and loves to wear three-piece suits even in jungles. From a snob who sticks to his more accomplished sister to stay relevant at the start of the film, he turns into a more confident man by the time the adventure wraps up. He has the best lines in the film – besides the leading man – and his interaction with an animal on the boat is worth every penny. He might remind the audience of John Hannah’s Jonathan in The Mummy trilogy who was everything but an explorer and often found himself to be at the wrong place at the wrong time.

Read more: The Rock, Dwayne Johnson, has announced a sequel to ‘Jungle Cruise’

Fans of Paul Giamatti might not find his fewer number of scenes amusing but he does a decent job as the man who brings Frank and Lily together, without even trying. As for Dwayne Johnson, his act as the carefree steamboat skipper reminds the audience of Humphrey Bogart’s Charlie Allnut from The African Queen, Harrison Ford in the Indiana Jones franchise, and Johnny Depp’s Jack Sparrow from Pirates of The Caribbean. However, he carves a separate identity with one thing that was missing in all three leading men – muscles. His ‘smoldering intensity’ helps the film become a franchise, with the sequel already in the works with the same cast.

Add to that his terrible jokes (they are actually funny!), calling his employer ‘pants’ (she wears trousers!), and keeping a pet jaguar on his steamboat, you have a Dwayne Johnson adventure that kids would love and adults would enjoy. The locations are top-notch and unlike the previous flicks with the same theme, the excellent post-production gives the ride an authentic touch, making the audience feel as if they were in the same steamboat, in the same era with the same travelers.