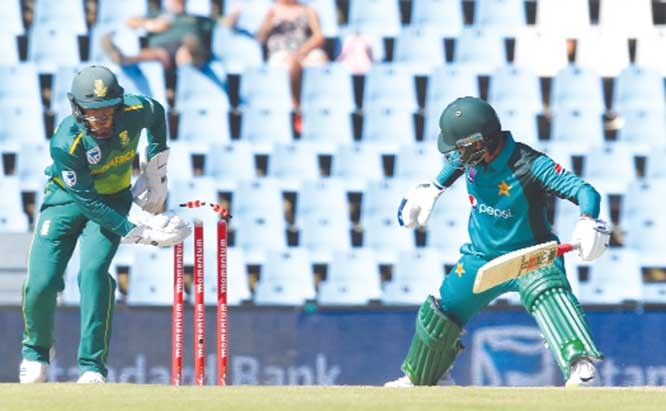 some teams tour other countries to test their strength; others do that to gather experience. Pakistan is the only team in the world that tours other countries to test their weaknesses and that’s exactly what they did during the on-going South African tour. Despite doing below expectations in Tests, cricket followers in the country were hopeful of a better result in ODIs, but sadly the series went to the better green, the South Africans. The series was evenly poised till the final match but it was Pakistan’s failure to learn from their mistakes that cost them the grand finale and hence the series.

The Pakistan cricket team is known for its unpredictability but now it is slowly moving away from that tag and into the uncertainty corridor, especially after the Sarfraz case. What the captain said was wrong but what the Board did was even more damaging. Instead of appealing against the ban especially since both the parties had decided to move ahead, the Board recalled Sarfraz as if the plane he was supposed to travel in was the last from South Africa. When the captain isn’t sure of his position, what do you think the players will think of their position? Add to that the praise Shoaib Malik received after winning one match. The message the cricket fraternity got was that Sarfraz should join Kamran Akmal for the betterment of Pakistan cricket!

Imam-ul-Haq was given chances in ODIs and he excelled; but why wasn’t the-more-successful-in-Tests Shan Masood tried in ODIs when the team was failing badly? A person who showed that he had improved as a batsman, could bowl medium pace deliveries and take wickets and was excellent in the field was benched after being selected for the ODIs. Had he been there instead of someone like Mohammad Hafeez, things might have been different, especially in the last match.

Similarly, the curious case of Hasan Ali’s ouster must be looked into because since his debut he has been instrumental in Pakistan’s victories and dropping him raises eyebrows.

Pace is ace, especially if multi-dimensional!

If ever Sherlock Holmes asked me about a baffling case, I would direct him towards Pakistan cricket team and ask him to find out the person who suggested that one-dimensional bowling attack is rewarding. For a team that should have gone with the best bowling attack, we went for a one-dimensional attack for no reason. Yes, we did get the home team out in one match but in the remaining four matches, we took only 12 wickets (one match was judged on the D/L method) which is shameful for a country that specialized in Yorkers and toe-crushers. Why did we fail in taking all ten has more to do with our pace attack than spinners? The fast bowlers we fielded were all left-armers, bowled between 120 and 140 kilometers per hour, swung less and took wickets only when the conditions supported them. Add to that a left-arm spinner and a leg-break bowlers and the angle they all delivered the ball was same — on the left-handed batsmen’s off, and right-handed batsmen’s leg. Hasan Ali or someone faster than 140 kph (regularly) would have made the difference, but the selectors didn’t seem enthusiastic about that. Otherwise, Junaid Khan would have been leading the attack, and Amir would be improving his skills in domestic cricket.

Avail yourselves of all chances to win matches

And when fielders drop catches, miss run-outs and batsmen are in a hurry to reach the dressing room instead of carrying the innings forward, not even the best batsmen and bowlers in the world would be able to help the team. Pakistan’s ground fielding may have improved but some of the players still look miserable when they see the ball coming their way; a few don’t even try to touch the ball and rightly so, they might be axed for life if they get injured, a fate that befell the captain after one mistake. If Pakistan is to do well at the World Cup and prove that the ICC Champions Trophy wasn’t a fluke, they must select the best players for the mega event, or the result wouldn’t be much different from those of 2003, 2007 and 2015.