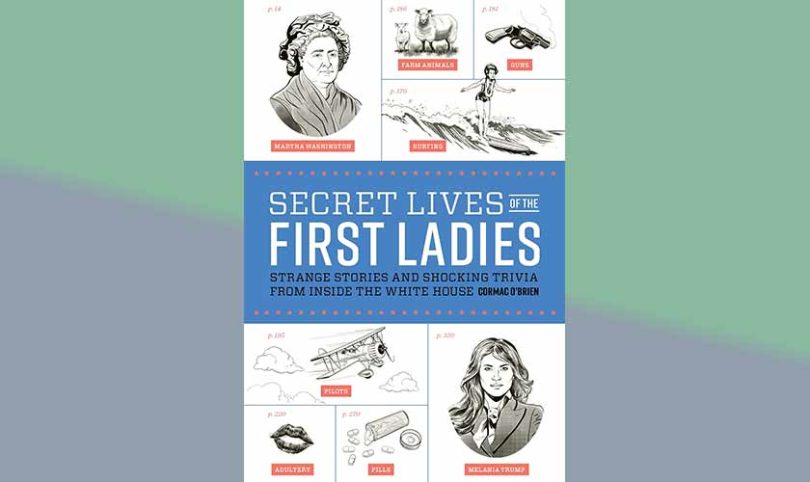 They say that behind every successful man, there is a woman. However, such a truism has never been said about a United States President, irrespective of the fact that some presidential candidates won elections because of their wives, while others lost for the same reason.

Cormac O’Brien’s Secret Lives of the First Ladies deals with all women who have been First Ladies and either made a presidential candidate look like the best choice or the worst one, depending on how they presented themselves.

Even the most beautiful and classy First Ladies had their reasons for supporting their husbands, and the leaders of the free world have been under the delusion that they are the most powerful men in the world! But as the saying goes: behind every successful man… and so goes the story of American politics as a result.

This book claims that it covers the ‘strange stories and shocking trivia from inside the White House’ and delivers on its promise. After going through it, you will realize that most American Presidents were normal human beings and were made to do strange things because their spouses pressurized them. That doesn’t mean that the First Ladies were the villains; many US Presidents were so incompetent that had it not been for their wives, they might not have lasted a day in the Oval Office.

From writing speeches to delivering a few, these First Ladies had a lot to do in the development of their ‘Mr. President’, and were integral to many decisions that went onto change the world.

Come to think of it, American Presidents and their family lives aren’t that different from the British Royals. But while the British people love the monarchs, despite their highs and lows (read extra-marital affairs), the same can’t be said for the US Presidents, for they are elected to serve the people, and aren’t allowed to follow their hearts. It is one or the other, never both.

In this revised and expanded edition from Quirk’s best-selling Secret Lives series, you will meet cheating husbands and wives, interfering First ladies who weren’t happy at all during their time in the White House, as well as some who steered their husbands towards the Presidency and believed in them when they didn’t believe in themselves.

Let’s begin with Martha Washington, the wife of the first US President and who is also one of the founding fathers of the country: George Washington. Details about Martha, such as her date of Birth and Death, when she married the man who would be President, their progeny, her religion and astrological sign, and a sound bite that would give an impression of how her mind worked are presented ‘before’ you begin the chapter, shedding light on her. In the pages that follow, one gets to understand information that nobody taught you at school or college.

Martha Washington was a wealthy widow; when in-need-of-wealth George Washington married her. She had a rival for her husband’s affections, Sally Fairfax, and it is speculated that he married Martha but loved Sally, even after becoming President. However, she had secrets of her own and was suspected of murdering her first father-in-law John Custis IV for he drew up a sadistic will and didn’t leave Martha and her first husband any choice. Now that’s interesting, isn’t it?

So what if Lucy Hayes banned ‘partying’ in the White House; Dolley Madison loved to chew tobacco or that Ellen Wilson slept with a gun under her pillow. Mary Todd Lincoln conducted seances regularly, and it had more to do with her children’s death. Florence Harding was the first ‘First Lady’ to fly in an airplane (that too with a female pilot); Lou Hoover transported supplies to the front lines via bicycle during the Boxer Rebellion in China, while Rosalynn Carter once found herself trapped in a bathroom stall minutes before she was due to deliver a speech! Of course, she escaped when she climbed over the door, but that wasn’t something a ‘First Lady’ would do nowadays and live to tell the tale.

However, the most shocking information this book provides is that Jacqueline ‘Jackie’ Kennedy became the first ‘First Lady’ to be photographed in a bathing suit, and also spent 121,000 dollars on her wardrobe in a single year. Betty Ford wasn’t behind, and at a time when First Ladies weren’t active on the scene, she liked to chat on CB radios, and her handle was “First Mama.” And then there is also the mention of those who married a President but either died before he entered the White House or left him for his kookiness (very few cases!).

With the arrival of Joe Biden to the White House, one does hope that the First Lady Jill Biden would emulate Michelle Obama rather than Melania Trump, otherwise the next edition of this book will not spare her!