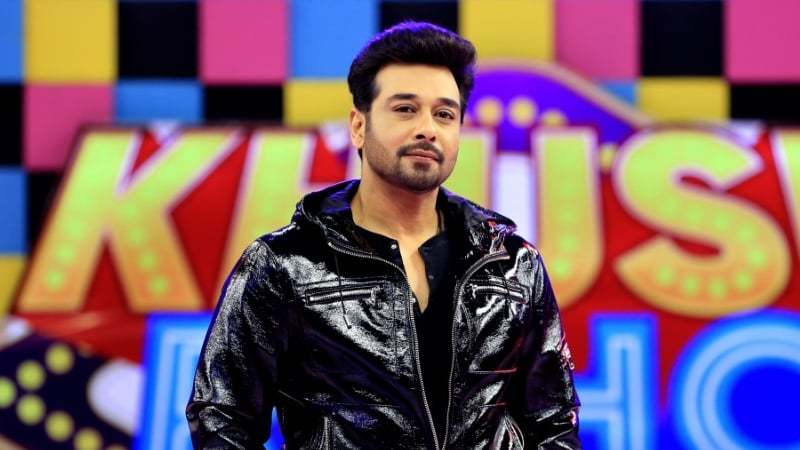 Faysal Quraishi is one of those actors who don’t just play a character but own the role. Be it his recent dramas Log Kya Kahenge, Muqaddar, Fitoor or Dil-e-Momin, he manages to appear as a different person every time. Not only does he make people wonder how easily he switches characters and excels in all, he surprises them all with his versatility as a performer.

Besides acting, he keeps himself busy as a game show host (formerly a morning show host), a producer (at times), and above all, as a mentor to upcoming artists. BOLD had a chat with the legendary actor about his glorious past, happening present, and hopefully bright future, and he spoke his mind about everything.

It was during the 1980s that Faysal Quraishi followed his mother Afshan Quraishi and father Abid Quraishi into TV; while the former was a regular in TV dramas, the latter failed in films despite his good looks. Faysal decided to try both films and TV, and began his career through Mirza & Sons and Daur-e-Junoon, before films finally happened.

“As a film actor, I was doing quite well in the late 90s; some of the famous songs like Khalil Haider’s Kapre Badal Kar in Marvi and Rahat Fateh Ali Khan’s debut song Kisi Roz Milo in Mard Jeenay Nahi Dete were even filmed on me. However, veteran director Javaid Fazil convinced me to switch (back) to TV early in 1997 and I remain indebted to him for that,” said Quraishi.

The actor shared that it was Fazil who predicted that the next 20 years will be dominated by TV after which Karachi’s film industry will rise, adding that it was “exactly how it happened.”

Quraishi believes he has managed to survive in the industry because of his versatility and ability to play his age, rather than go for something that he can’t pull off.

His character in Log Kya Kahenge was loved by all, because he played a caring friend, while in Muqaddar and Fitoor, some loved his portrayal, and some didn’t, he received mixed reviews.

“Log Kya Kahenge was a different experience for me as an actor, I had to play a guy who loses his friend to suicide, and then has to take care of his family after he is gone. Since Aijaz (Aslam) opted to play the character who takes his own life due to difficult circumstances, that worked as a catalyst for me, because whenever I thought of my on-screen departed friend, I used to imagine my best friend Aijaz Aslam instead, and that made me cry a lot on screen,” he revealed.

The characters he played in Muqaddar and Fitoor, “highlighted the hypocrisy” present in the Pakistani society, adding that those who took it as a drama instead of a social commentary appreciated it.

“I had a great time working on the dramas, and although I didn’t know at first that Sardar Saif would die in the former, I agreed with the makers reasoning and agreed to it,” said the actor.

Quraishi didn’t restrict himself to acting only, after giving more than a dozen years to TV, he divided his time to acting and hosting, something that helped him forge a connection with the audience.

“I had done stage when I was young, but hosting is a different experience altogether. Not only did it help me connect with my fans, but it also opened my eyes to a lot of things that were previously not known to me. It’s embarrassing to admit but there are a lot of issues in our society that need to be highlighted, but we can’t because of the restrictions on TV,” said the Fitoor actor.

Quraishi said that via his morning shows he used to highlight such issues, and on quite a number of occasions, him and his team actually helped those in need with the help of philanthropic folks.

“We also developed many real-life stories into TV dramas and highlighted the matter in any way we could, so that people know the difference between right and wrong,” said the 48-year-old.

Hosting a show is a different experience altogether

Currently, Faysal is hosting a game show ‘Khush Raho Pakistan’ on BOL Entertainment which is doing very well. The actor-turned-host feels that nothing can be compared to the adrenaline rush of a live show.

When asked about a few recent incidents that happened on his show, Faysal Quraishi explained that be it a game show or a TV drama, he always tries to keep everything in check to avoid things from going haywire.

A few years back, Quraishi turned to production and delivered a few hit TV serials especially Baba Jani. It propelled him towards film production and he launched his film Sorry: A Love Story, but it was marred by Covid-19, like most films in Pakistan. However, the actor-producer is confident that once things improve, the production will move ahead, although he can’t say the same about producing for TV.

The actor has been in the industry since the 1980s and feels that there is no such thing as the ‘forty-plus dilemma’ if the actor stays fit and looks after himself.

‘‘People say that once you reach your 40s, offers to do lead roles dry up whereas I believe that with maturity, you get a chance to play mature roles. I have been playing young to old characters for the last fifteen years, against my seniors’ advice, and that has helped me a lot. Also, when I try to do a light character, the audience rejects it most of the time for their expectations are sky high; my advice to them is to let me do some light-hearted character once in a while because I am a human too!”

After digital, there is Hollywood!

With an eye on the future, Quraishi has gone digital and made a name for himself on YouTube. The Bashar Momin actor feels that after launching his YouTube channel, he can try to be himself in front of the camera, and relax for some time in his comfort zone, free from scripts and guidelines. ‘My YouTube channel – Faysal Quraishi Official – has also helped me connect to the audience in a different way, now I can talk to them whenever I want without being a character, for a change.’

However, he adds that YouTube is not the ultimate solution if we want to move ahead in the digital era.

“We need streaming services like Netflix, Amazon, Apple Plus, etc. in Pakistan if we want to raise the bar. Not just that, we have to produce content that matches the international standards.

Recalling a visit by legendary Indian poet and filmmaker Gulzar, he shared that the Indian star had said that Pakistan is blessed with stories it just needs searching.

“Sadly, we can’t cover everything because of the restrictions, but if we have multiple streaming services of our own, we can. The audience of today doesn’t want to be bound to a timeslot, they want to binge-watch at their own convenience, and until and unless we give them that, they will continue to move away from the TV to streaming services that cater to their requirements,” warned the actor.

And he also talks at length about his most ambitious project so far – his Hollywood debut flick Window – where he will share the screen with Hollywood actor Faran Tahir, besides local actors Sami Khan, Hameed Sheikh, and Suhaee Abro.

“Window is something that is closer to my heart, and I did it for two reasons – first, it gave me a chance to explore myself as an actor, and secondly, I couldn’t let go of an opportunity to work with the legendary Faran Tahir who has been representing Pakistan in Hollywood for a long time. He is such a down-to-earth guy that it made me ask him why he has no tantrums like other Hollywood stars.”

He concluded the interview by saying that working with Hollywood writers and crew helped him learn a lot of things as an actor.

“It was great to work with Ammar Lasani and Kanza Zia who are directing the movie; it is not a typical Hollywood action thriller but something closer to what we term ‘art movie’ in Pakistan. I will be reuniting with Sami Khan after Bashar Momin and trust me, it is nothing like what you have seen before.”