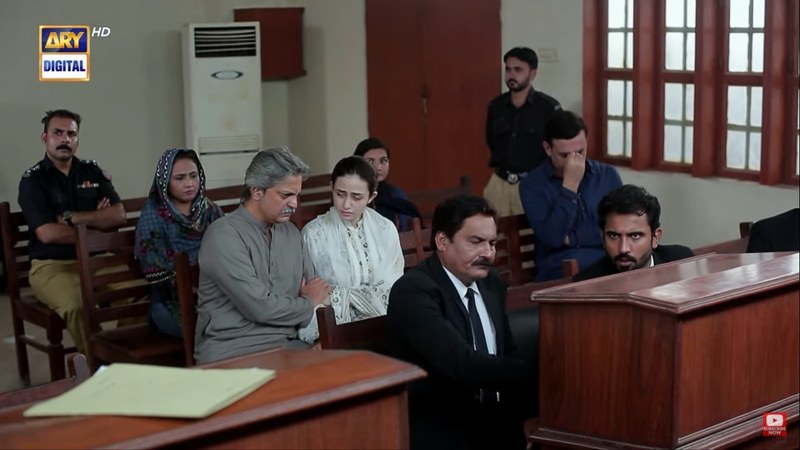 The 28th and 29th episodes of Dunk were just too good to resist, especially if you were watching it as a drama and not as a real-life event!

One good episode can raise the bar, Dunk just had two great ones!

The way writer Mohsin Ali has smartly penned the courtroom sequences, and Badar Mahmood’s direction has done a great service to the audience especially after the court was ridiculed in another drama, on another channel. Add to that the ‘nexus event’ of the elder brother, the arrival of an unexpected witness, the comeback by the lawyer and you have a perfect drama on your hands.

The Story – It’s Good versus Evil,

In the Court of Law! With his mother’s blessing, Haider (Bilal Abbas) takes Amal (Sana Javed) to court, but it seems that his lawyer (Sameena Nazir) isn’t at par with the opposing lawyer (Rashid Farooqi). He gets labeled as a mentally unstable person, his own brother-in-law lies in court for some reason, his father believes his ex, more than him and it seems that the case will get over in no time. However, his lawyer stages a comeback on the third day and proves that Amal has been lying all along, be it about Professor Humayun’s case, the alleged rape attempt, the threatening call that never came, and everything else.

Add to that, Safeer (Fahad Sheikh) finally finds out the truth about his scheming wife and decides to set her free and moving to the other side. After these unexpected developments, Alma’s lawyer questions why Professor Humayun’s wife (Yasra Rizvi) didn’t pursue his case and claimed that she knew that her late husband lacked character, otherwise she would have been in court, observing the proceedings. To his disappointment, she was there, and will be giving her views in court in the next episode!

The regular excellent performers Bilal Abbas, Sana Javed, and Azekah Daniel were great as usual for Bilal represented the calm, Sana the thunderstorm, and Azekah a mix between the two. One must mention Sana Javed’s expressions in court that have been priceless for she knows that she is lying, but doesn’t want others to find out. From being three very close friends in the initial episodes, they have come a long way to be adversaries that too in a court of law.

Talking of court, Rashid Farooqi and Sameena Nazir as lawyers and the late Khawaja Shadab as the judge showed exactly how a courtroom sequence should be enacted, with grace and planning. Rashid Farooqi was sharp, Sameena was calculated and the judge kept them in check in what turned out to be his final acting role. It remains to be seen how Yasra Rizvi manages to change the tide of the court proceedings in Bilal Abbas’ favor, for she is all set to explode in front of the very woman who ruined her life, took away her husband, and orphaned their kid.

The Bad – The open-door policy is still hard to believe!

In the Dunk universe, everyone knows where the other person lives, when that person would be home, and where to find a person when you don’t even know him or her! Be it Minal entering Mrs. Humayun’s house, Safeer going to meet his brother, Haider entering his parents’ place, and Amal’s room (why did he do that!), and Minal going to his brother’s house to confront him for lying in court, couldn’t it have been done as creatively as the courtroom sequence? It would have helped a lot, because if the audience had a choice, they would go and watch a stage drama where sets change regularly, instead of a TV drama that is supposed to be different!

Also, a little more reaction from Amal’s father or father-in-law would have helped, when Safeer divorced her in court. She could have pleaded with him after he came and sat down with his brother, gave him a sinister look, or even looked at her Taya who promised to take care of her. That would have added that something extra to the scenario that the viewers missed, for it showed Amal as weak, and she is anything but that!

The Verdict – Dunk shows others how to execute a perfect courtroom sequence!

Producers Fahad Mustafa and Dr. Ali Kazmi are two experienced campaigners who look for stories that are both from our surroundings, and commercially viable as well. Yes, some of their dramas might not have been realistic in the past but with Dunk, they have taken the menace of ‘alleged sexual harassment’ head-on. The way they have taken the drama forward, making it easy for most of the viewers to understand is commendable for they were bashed, ridiculed, and even threatened on social media for showing a victim as a villain.

His expressions are literally unbeatable ❤️😍 No words just look at this guy and his eyes 🔥#Dunk #BilalAbbasKhan pic.twitter.com/O93OpFdhJL

Thankfully, they had an excellent cast, writer, and director on their side who made an inspired story, a lot more believable and acceptable in our society. After this play, scheming boys and girls (oh yes, boys too!) will think twice before crying wolf, for the ‘villagers’ know that not every alarm raised is alarming at all!