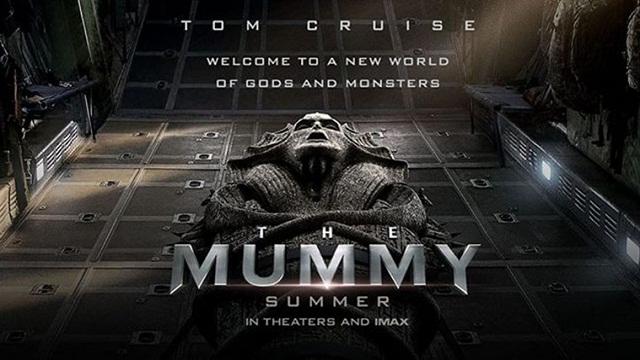 The return of The Mummy franchise has had two kinds of effects on the audience – some have been very happy to find a new Mummy movie while others have been disappointed, as it was the last thing they expected from Tom Cruise. The film has been made in the vein of Mission Impossible franchise and maybe that’s the..

The return of The Mummy franchise has had two kinds of effects on the audience – some have been very happy to find a new Mummy movie while others have been disappointed, as it was the last thing they expected from Tom Cruise. The film has been made in the vein of Mission Impossible franchise and maybe that’s the biggest mistake by the producers – bigger than unleashing the centuries-old Mummy herself.

Former army officer Nick Morton (Tom Cruise) accidentally releases Princess Ahmanet (Sofia Boutella) from her resting place and when she escapes to modern day, she puts a curse on Nick, intending him to be used as a replacement vessel for her lover Set. Thankfully, with the help of Dr. Jekyll/Mr. Hyde (Russell Crowe) and Nick’s former lover Jenny (Annabelle Wallis), he tries his best to live as long as possible and save the world from the evil forces. There is also a blade of the Dagger of Set that is central to the plot, and it takes the good people all eternity to set the show for the final countdown.

The only good thing about this flick is that it stars Tom Cruise and his fans will do anything to watch his films on the large screen. Even after turning 54, he is playing roles that require a younger actor because he doesn’t age. But then, shouldn’t he play a vampire instead of a Mummy hunted and Mummy hunted? His co-star Russell Crowe is in fact one year younger to the protagonist Cruise – and that says it all. He gets to do everything on his checklist be it swimming under water, diving from the sky and being reincarnated in the process. Like always, he is the last line of defence for us all and manages to show off his athletic prowess in all the stunts of the film.

Too much Tom Cruise is exactly what’s wrong with the film. He is there in every other scene and tries too hard to shed the Ethan Hunt-image and come up with something new. If you enter the cinema after the titles, you will assume that it’s Mission Impossible 6 instead of a Mummy film. There was no need for the Dr. Jekyll/Mr. Hyde scenario, which seemed more comic than serious. Russell Crowe was wasted as an actor here, although it would make sense if he were to star in his own franchise based on Robert Louis Stevenson’s characters. The background score by Brain Tyler is no match to Jerry Goldsmith and Alan Silvestri’s in the Stephen Sommers The Mummy franchise. In fact, the last reboot featuring Brendan Fraser is still fresh in the minds of the loyal fans, and when compared to that, this film is a nightmare that shouldn’t have happened at all.

Tom Cruise may have done a few forgettable films but The Mummy remains on top because it offers nothing new; nothing could match the Mummy with supernatural powers except a supernatural Tom Cruise and this is where the audience loses interest. As Ethan Hunt, he can get away with anything in Mission Impossible series but when not in that universe, he is an actor who has done some marvelous films. He shouldn’t have accepted this flick and if his thinking was that he will have a parallel franchise, then he should have read the script with his eyes wide open. The film tanked at the US box office just like the never-improving Pirates of the Caribbean franchise, proving that a good story can go a long way, and a bad one can falter despite star power.