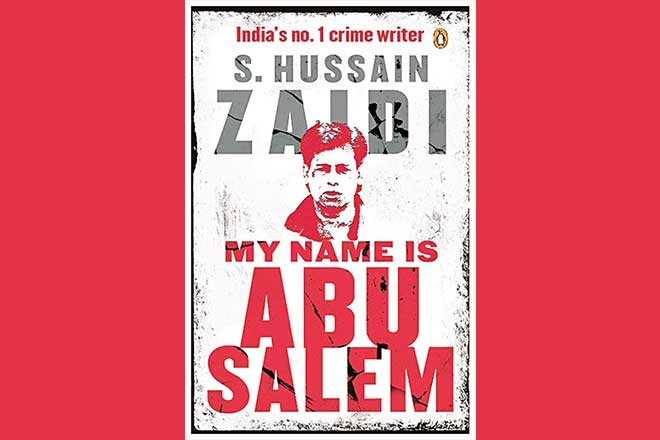 What if I told you that life outside Bollywood used to be as dramatic, action-oriented, romantic and hectic as life in Bollywood? What if I told you that the man responsible for Sanjay Dutt’s incarceration wanted to become a hero himself? What if I told you that one of the promising female actors at the turn of the century was, in fact, the girlfriend of a gangster? Would you believe me or not? You will believe it after reading S. Hussain Zaidi’s My Name Is Abu Salem that is the stuff from which movie scripts are derived.

Who was Abu Salem and how was he instrumental to Bollywood stars … this million-dollar question has been answered in this book by the exciting crime writer who makes non-fiction so interesting to read that it feels like fiction? After writing award-winning books – some of which were translated into films – Hussain Zaidi turns his attention to the man who would be king of Mumbai for some time. How Abu Salem became a dangerous mafia don from a poor mechanic, how his looks earned him many names and how he affected the lives of Bollywood stars is all available in this book.

Abu Salem wasn’t like his fellow gangsters – he was much better looking than the rest – and that’s what made him more dangerous than his counterparts too. Although he came from a humble background, he ran away from his home in Azamgarh to Delhi and later to Mumbai in search of quick money and the respect he thought he deserved. The writer must be commended for not showing his feelings towards the gangster and staying within the parameters of journalism, without venturing into sensationalism for no reason.

If you didn’t know that Abu Salem was behind the murder of music baron Gulshan Kumar or the attempted murders of Rakesh Roshan and Manisha Koirala’s secretary, then this book is just the right thing for you. How he became an important man from a mere driver in D-Gang and what were the reasons that made him flee Dubai are mentioned here. You also get to know about the different techniques that he invented so that the sharpshooters could evade capture since they were underage and from outside of Mumbai. Ingenious!

The book also talks about some of the most important cases in Indian history such as the involvement of Music Director Nadeem in Gulshan Kumar’s murder; why the ladies in his life were happy with his illegal ways and what his aliases were when he was on the run, considering all of them looked genuine and authentic. You also get to know that when he first threatened Subhash Ghai ahead of the release of Pardes, he was quite civil (according to the director) who just wanted to make a presence in Bollywood.

It was his affair with Monica Bedi that sounds as unbelievable as it is true. Not only did it affect her Bollywood career but also made life difficult for him. His escape from India and capture abroad, his struggling life as an ex-mafia don and his story from rags to riches to jail resemble a potential hit film and maybe that’s why Abu Salem thinks that one day, he would be able to produce a biopic on himself. Before that, he will be present in Rajkumar Hirani’s Sanju since it was, he who handed the ammunition to Sanjay Dutt, who was later sent to prison for arms possession.