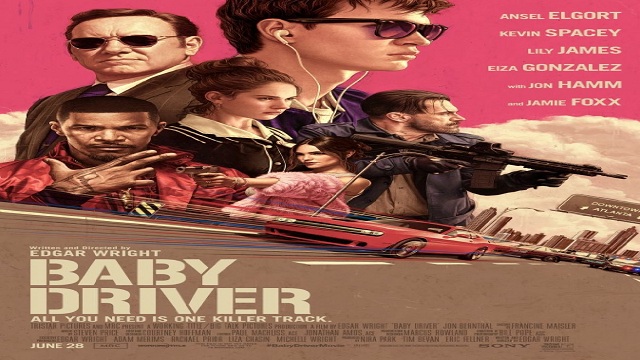 By: Omair Alavi My faith in cinema was nowhere when I decided to buy the ticket for Baby Driver. The Eid releases in Pakistan made me furious as they pushed my money down the drain by not being worth the Rs. 700 I spent. Baby Driver restored my faith in films by being cleverly simple, devilishly fresh and…

My faith in cinema was nowhere when I decided to buy the ticket for Baby Driver. The Eid releases in Pakistan made me furious as they pushed my money down the drain by not being worth the Rs. 700 I spent. Baby Driver restored my faith in films by being cleverly simple, devilishly fresh and fast without being furious. It is the kind of film that viewers wish of watching in cinema as it provides magic in the form of car chase; a story in the form of a new-look heist and a star cast to die for.

His name maybe Baby (Ansel Elgort) but he is the fastest getaway driver around who works for no one but crime lord Doc (Kevin Spacey), that too because he owes him money. Doc specializes in planning lucrative heists, doesn’t work with the same crew twice, but when it comes to getaway, he always bets on Baby. What makes Baby better than others is that a) he is Doc’s lucky charm and b) he suffers from tinnitus and listens to music to drown out the constant ringing in his ears. This use of music helps him in thinking quickly when it comes to escaping from the scene of the crime. Things go haywire when he falls in love with Debora (Lily James), pays the complete debt to Doc and doesn’t want to return to a life of crime. Does Baby escape the clutches of Doc, do his colleagues Buddy and Darling (John Hamm & Eiza Gonzalez) and Bats (Jamie Foxx), approve of his ways … watch the film to know the end. I ain’t telling.

When content is king, nothing can stop a film from becoming successful. Edgar Wright’s script and direction are top-notch and he executes the car chases so well that you’ll be reminded of The French Connection, Ronin and other classics. The cast comprises of actors who fit the characters like gloves – Ansel Elgort’s Baby is cute, adorable and no one would suspect him of being a getaway driver; Kevin Spacey’s Doc appears only when needed while Jamie Foxx’s Bats is a gun-slinging robber – both are perfect for the role. John Hamm and Eiza Gonzalez play the modern-day Bonnie and Clyde and are friends of Baby before he decides to go straight.

Baby’s romance and his relationship with his foster father get lost in the battle of Good and Evil but that’s because of the Surprise Package in the plot – the Cars – perform well as escape vehicles. Not much is wrong with the film except that the leading lady is the weakest aspect of the otherwise perfect flick. She comes around as someone naïve and trusting, which is exactly what Baby doesn’t want when he is on the job!

Baby Driver is that kind of flick that you can watch anytime, anywhere. The way it has been packaged is classic and scenes where he dodges the helicopter, where he gets a job at a pizza point and where the team learns about his audio cassettes are as original as original could be. Add the action sequences, the car chases, hilarious pop culture references that may or may not be correct and the scenes where Baby is without a car are like dream come true for the audience who have had enough of Nitro and Furious.