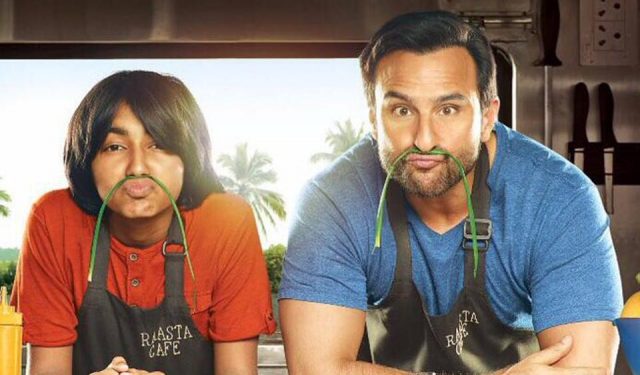 By Omair Alavi Love him or hate him, but Saif Ali Khan is back with a role that suits him like a T. In Chef, he plays a professional Chef who makes it big in America before returning to India to make it even bigger. The movie revolves around the hustle-bustle behind the life of…

Love him or hate him, but Saif Ali Khan is back with a role that suits him like a T. In Chef, he plays a professional Chef who makes it big in America before returning to India to make it even bigger. The movie revolves around the hustle-bustle behind the life of a professional Chef and Saif manages to look the part, unlike most of his films where he plays himself instead of the character. Although this flick is the official remake of Jon Favreau’s Chef, it has its own soul that shows others that it is possible to remake a Hollywood film with localized tarka if you want to do it sensibly.

Roshan Klara (Saif Ali Khan) is a Non-Resident Indian settled in New York, running a successful restaurant with his team. After hitting a customer for his criticism, Roshan is fired from his job and decides to spend the time with his estranged son Armaan (Svar Kamble) who lives in Cochi with his ex-wife Radha (Padmapriya). Things get better for the father-son duo after a friend of Radha’s offers Roshan to revive a run-down double-decker minibus and turn it into a restaurant. Does the restaurant become a success, or does Roshan’s temper gets the ‘worst’ of him, watch the film for more.

Saif Ali Khan is on top of his game in the film; he should have opted for such roles a long time back. He looks and acts like a Chef, whose character has difficulties because of his temper and inability to upgrade himself. The charming South Indian actress Padmapriya plays his wife and a dance instructor who acts as a mother of a teenager. The kid Svar Kamble is a revelation as he gets to play the child from a broken home who loves both his parents. He acted just like the kid in the American version, however, if given a good role he might prove his acting credentials in a better manner. Dinesh Prabhakar as the Bus Driver was an addition in the Indianized version and did a good job in his limited scenes. Casting Chandan Roy Sanyal in a supporting role was a step in the right direction because he excels in that kind of characters, not lead ones. Then there was the music – songs were in the background and gave a good feeling rather than being distracting and moody.

Saif Ali Khan plays a Chef who has returned from America to be with his son; there are times when he plays himself but that is quite less than more. Milind Soman plays his ex-wife’s friend who pushes him to do more, and everyone who knows the He-Man of Bollywood would have wanted him in more scenes. Like the American version, the film could have asked stars to play the minor characters just as Dustin Hoffman played the Boss, Scarlett Johannsson the colleague and Russell Peters the cop. The film’s length is a little too much for a movie that has been impressively edited and doesn’t bore you with useless sequences.

Chef is one of the finest adaptations of a Hollywood film in Bollywood; kudos to the director Raja Krishna Menon for adding the local touch to make the plot believable. The movie may not be Saif Ali Khan’s best but it will feature in the best five of his career. For once, he looks believable and not irritating, probably because he plays his age and acts mature since he has an on-screen son. The rest of the cast has also done a good job whereas the tour on which the Double Decker takes us shows how the beautiful countryside can be utilized intelligently.