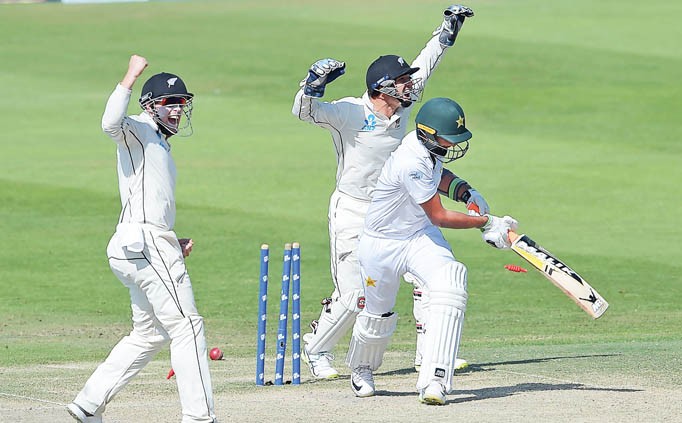 Pakistan may be the top team when it comes to the T20 format but since Test cricket is the gold standard here, we stand nowhere despite defeating some of the better teams in their den. It is in the longer version of the game that we also suffer the most humiliating of defeats and the one in Abu Dhabi recently was one of such instances. Yes, the wicket might have been difficult to bat on in the last 2 days but blaming the wicket would be wrong as the batsmen didn’t want to stay at the crease as if they were in a hurry to go back to the hotel and relax. ‘Who is responsible for the debacle’ shouldn’t be the question, it should be why this happens in Pakistan only!

For the first time in more than a decade we saw two bowlers take as many as 5 wickets in an innings for Pakistan, the last time when that happened in 2004 (Shoaib Akhtar and Danish Kaneria), George W Bush was America’s President, Pervez Musharaf was ruling Pakistan, Osama Bin Laden was still alive and Misbah-ul-Haq was a Test discard. It might not be a common occurrence in the game of Cricket but for Pakistan, it was especially since our bowlers always hunted in pairs. It should be an eye-opener for all those who supported the inclusion of Wahab Riaz and Rahat Ali in the team since they hardly seemed Test-class bowlers but when it’s about Pakistan, we love to experiment without the fear of accountability. Even Mohammad Amir in his current form deserved to be ousted and that’s one of the reasons why the bowling was a winner with Hasan Ali and Yasir Shah at the top.

Playing with careers to accommodate others!

Can anyone please explain why Fakhar Zaman was dropped after scoring runs on his debut? Was it to accommodate Mohammad Hafeez in a playing XI where there already was a better off-spinner in the form of Bilal Asif, a better opener in the form of Azhar Ali and many better fielders than the 38-year-old all-rounder? If Hafeez can play after one scoring opportunity against Australia in favorable conditions than Fakhar Zaman also deserved the same. It’s better that we don’t repeat the mistakes we made with Fawad Alam who was tossed out of the Test side after a successful Test debut where he scored a century that too in Sri Lanka against a better bowling unit.

Mindless batting at its best

Batting in Test cricket is the real test of any batsman in the world but we tend to take it easy, especially when the going isn’t tough at all. The way Pakistani batsmen threw their wickets away just to show that they don’t like taking pressure was perhaps more stupid than a comedy movie that no one likes. Skipper Sarfraz Ahmed got out to a mindless sweep shot, Bilal Asif was clueless in the lower order, Yasir Shah couldn’t stay for long despite being a better blocker than many in the side and Hasan Ali wanted to end the match and become a hero, only to miss it by ‘that’ much. Batting coach Grant Flower needs to reprimand all those who didn’t listen to him be it the captain because nothing is bigger than playing for Pakistan and playing with Pakistan is in no way acceptable.

And then there was Azhar Ali, the recently retired-from-ODI former captain of Pakistan Test team. After making headlines with his once-in-a-millennium kind of run-out against Australia last month, he was again doing an Inzamam in at a crucial point in the match when he ran out the top-scorer of the first innings Babar Azam while taking a risky single. Who gets dismissed through run out in Test Cricket but Pakistanis who have been doing so for decades! It’s about time that we try to get a running coach for the team who tells the batsmen the importance of being patient as well as instill in their minds that running out in Tests is not an option!