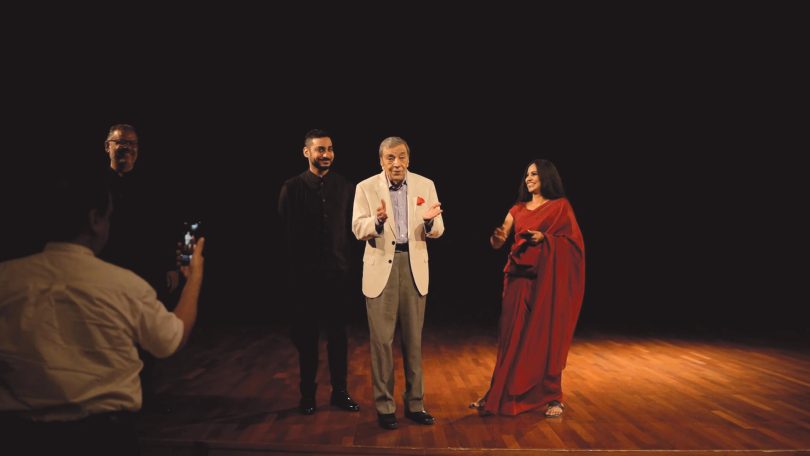 Artists especially theatre artists in Pakistan will remain indebted to Zia Mohyeddin, the theatre maestro who left his well-settled life in England to be in Pakistan so that he could train the artists as per the international standards.

Artists especially theatre artists in Pakistan will remain indebted to Zia Mohyeddin, the theatre maestro who left his well-settled life in England to be in Pakistan so that he could train the artists as per the international standards. He has been doing that for nearly two decades a nd hundreds of his students have managed to make it big in Pakistan’s entertainment industry.

On 19th May 2022, the National Academy of Performing Arts (NAPA) paid a rich tribute to Zia Mohyeddin by showing a feature documentary produced and directed by his own grand-nephew Umar Riaz. The feature documentary ‘Some Lover to Some Beloved’, chronicled the maestro’s life from his childhood days in Pakistan to his life abroad and his current status as founding father and President Emeritus of NAPA.

Not only was it well-received by the audience, many including this scribe couldn’t find an empty seat at NAPA’s Zia Mohyeddin Theatre and had to sit on the stairs to be amongst the audience. The documentary was divided into multiple parts to keep it simple and concise; while the first one revolved around Zia Mohyeddin himself, two others were dedicated to Faiz Ahmed Faiz and Dr. Dawood Rehbar, both of whom left an indelible mark on Zia Mohyeddin’s mind and career.

Everyone who is into literature knows Faiz Ahmed Faiz who was a renowned poet of that era; how Faiz connected with Zia Mohyeddin is what this documentary tells the audience. With the help of renowned educationist Arfa Sayeda Zehra and Faiz Ahmed Faiz’s daughters Muneeza and Salima Hashmi, this segment chronicles Faiz as much as it does Zia.

The second part revolves around the relationship Zia Mohyeddin shared with his first cousin Dr. Dawood Rehbar, who guided him whenever he was in need of emotional support and guidance. Dr. Rahbar who spent his last few years in America passed away after recording his comments for the documentary, and Zia Mohyeddin’s wife discloses that Zia Mohyeddin who rarely cried, cried a lot after his death. In this segment, Zia Mohyeddin talks more about the good doctor than the good doctor speaks about his famous cousin; he even shows the picture he has put on display in his office at NAPA, such was the influence of the great man on his life.

There was another part of the documentary where Zia Mohyeddin talked about his past and his early days that were spent in Lahore. Not only did he take the viewers to his old house in Lahore but also showed them the now-defunct bus stop where his father collapsed from a heart attack; he also guided the audience towards his cousin Dawood Rehbar’s house which was quite near to his own place. The documentary also revealed that Zia was infatuated with one of his friend’s beautiful sisters but the way he described the incident of his first and only chance of meeting her was something only he could have done and made the audience laugh at the same time.

And then there was the segment where his wives (two exes, one current) spoke about his idiosyncrasies, his punctuality, and his unusual habit of taking just three sips from a teacup or smoking half a cigarette. While their views were being screened on the large screen, Zia’s expressions were also captured by the director which was nothing short of amusing.

The event was attended by the who’s who of the theatre community including renowned thespian Ehteshamuddin, Mrs. Azra Zia Mohyeddin, NAPA Board Chair Syed Jawaid Iqbal, and board member Javed Jabbar. NAPA CEO Junaid Zuberi, famous cinematographer Suleman Razzaq (who worked as an assistant cameraman in Zia Mohyeddin’s famous flick Immaculate Conception) and famous TV actor Adil Wadia also graced the event with their presence while many NAPA students were there at the venue to pay their respects to their popular teacher.

However, the documentary wasn’t without issues, and considering it took more than five years to complete, another five days wouldn’t have hurt. The jerky camera movement could have been avoided and the editing could have been crisp; the total duration could have been cut down by at least thirty minutes. There was no need to run Dr. Dawood Rehbar’s audio when the video was to follow it, and the same could be said of some of the shots that could have been kept away because of their ‘private’ nature. Showing the eighty-odd-year-old doctor sleeping on his sofa wasn’t something the audience would have missed, had it not been part of the documentary.

The same goes for Zia Mohyeddin’s work in Hollywood and Britain which was limited to only Lawrence of Arabia. He made his appearance in many flicks including Behold a Pale Horse, Khartoum, Bombay Talkie, and Ashanti but none was mentioned in the documentary. Similarly, the director chose to overlook his two Pakistani films Mujrim Kon and Suhaag where he worked with renowned Pakistani actors including Rangeela, Alauddin, and Rozina (in Mujrim Kon) and with Nadeem and Shamim Ara (in Suhaag).

One can say that this documentary covers his recitals and his theatre training in Pakistan more than his acting career, but it could have easily included his TV appearances in the 1990s. Who can forget his return to Zia Mohyeddin show on PTV after his return from the UK, and his famous collaboration with Shoaib Mansoor – Dhun Hamari Tumhare Naam Hui – where he talked about those Pakistani songs that were copied in Bollywood, and vice versa. Also missing was the footage of some of his plays as well as the comments of some of his famous students which would have made this documentary a ‘document’ to look forward to.

On the whole, the documentary paid a rich tribute to its subject Zia Mohyeddin, who was present in the audience and jokingly told the attendees that it contained a few details that could have been kept out. Still active at 91, Zia Mohyeddin has been a force to reckon with in the country and has made Pakistan proud with his many appearances in international TV and film projects. He is a legend who should be cherished, and ‘Some Lover to Some Beloved’ does exactly that.