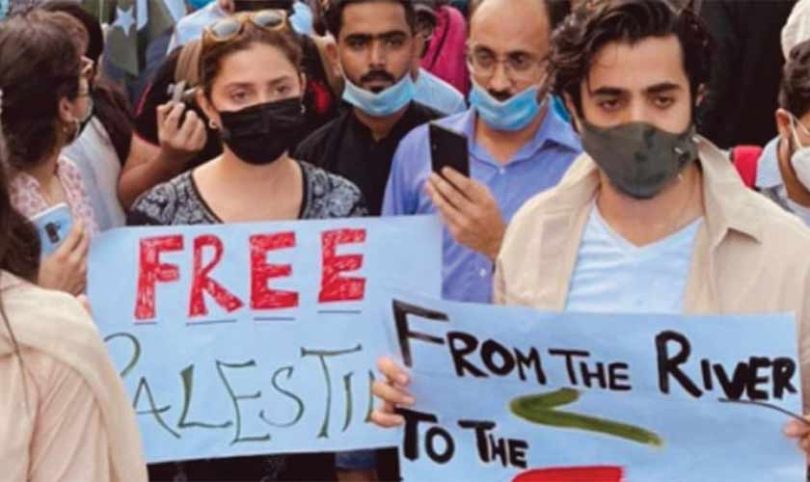 Ever since the advent of social media in Pakistan, the distance between actors and their fans has lessened considerably. While a few celebrities use social media accounts to interact with their fans and nothing else, there are many who owe everything to the medium. From Hania Amir to Dananeer Mobeen, social media influencers are preferred over accomplished actors. While their ascent has been good for them, many are unable to handle instant fame and that’s where things get ugly.

Thank to social media, we live in an age in which everyone is under constant surveillance. The best way to avoid being targetted is to think before posting anything. Whenever an actor, singer or celebrity posts something without giving it a second thought, it backfires. Ever wondered why the celebrities choosing privacy, even on social media, are the happiest? Or why don’t the legends, who have been around for a long time, get trolled like the younger generation, which loves to post every minute detail of their lives?

No matter how hard they work in the industry, celebrities always get booed by a certain crowd that neither understands the background of their actions nor wants to. From Mahira Khan’s now-infamous cigarette-smoking picture to her holding a placard supporting Palestine without wearing a dupatta, whatever she does generates both love and hate. The placard she was holding was ignored, as objections started coming in from all quarters regarding the missing dupatta.

Some celebrities do give the fans more reasons to interact with them with less love and more hate, and the latest incident of Hania Amir versus Asim Azhar is one such case. Had they kept their break-up private, people might have forgotten about their romance in a few months. The “baal baal bach gaye” and “bitter ex” comments weren’t exactly the best way for the celebrities to present their case. The same goes for the Nadia Hussain versus Nabila. The model turned beautician shared the latter’s private chat on social media, without permission, and not realising that it might look bad.

Had there been no social media, Alizeh Shah’s song might have been forgotten, like model Ayyan Ali’s attempt at singing before she was incarcerated. But since the song was released in 2021, those who didn’t like it shared their hate on social media. The same was the case with actress Nausheen Shah’s comments about designer Umar Sayeed, which didn’t go well at all. Whether things that are discussed in private should be shared on social media or not, the issue arises when they come out in embarrassing and childish ways. Not to take anything away from our celebrities, but like most of their followers, they sometimes act impulsively.

TV actor Faysal Quraishi feels that the problem isn’t social media but the users who have nothing better to do but troll celebrities. For someone who has over 1.2 million followers on Twitter and 1.5 million followers on Instagram, he has a lot to say about the “blasting culture in Pakistan.”

“It is very important to use social media for useful purposes, rather than posting everything on it for no reason. As influential people, celebrities must adhere to certain principles, to be taken seriously in the future. Those who can’t do anything become trolls on the internet because criticising others is the easiest way to get noticed. I try to comment on things that concern me as a Pakistani or as a Muslim. I stay away from issues that don’t concern me.”

Faysal Quraishi is critical of those who went all guns blazing against Mahira Khan, after she attended a protest rally at Karachi Press Club. “I was present at the event myself. I congratulate all the actors and actresses who came to the protest, despite the extremely hot weather. Many people, including youngsters, didn’t wear a dupatta because of the 40ish degree centigrade temperature that day. We should have been thinking of our Palestinian brothers and sisters. Yet, as soon as Mahira Khan’s picture went viral, the focus was on how she was dressed, instead of the message on her placard.”

The Bashar Momin star had a message for social media fanatics as well, who seem to be growing in number with the passage of time. “Try using social media in a way that inspires people. Some celebrities posted pictures of getting vaccinated because they wanted to inspire their followers to do so, but people made fun of the act without realising who was looking stupid.”

His comments were echoed by journalist and social media activist Mahwash Ajaz, who resides in Dubai but is constantly at odds with the moral police in Pakistan. She says that unless cybercrime laws are properly implemented in Pakistan, people will continue to act as “judge, jury and executioner” online.

“Contrary to popular belief, there are not many people in Pakistan who use Twitter. But sadly, every user appears to think that it is his or her job to take the other party to the cleaners, even if that means ridiculing himself or herself. In a country where people don’t usually read, believe everything that they see on social media, and have no means to confirm a report, everyone wants to be the first to break the news, or cancel a celebrity or a TV show. I am appalled by parents who hand mobile phones to their kids at an impressionable age. At a time when they should be reading books, they are making fools of themselves on social media. How they have so much time on their hands is beyond me.” Ajaz says.

She has a valid point. Pakistan’s literacy rate is lower than most countries, yet social media users seem to have all the time in the world at their hands, making them dangerous to the public and to themselves. She also blames overseas Pakistanis, who constantly act as saviours, without realising the hardships faced by those left behind. “Overseas Pakistanis should realise that people living in Pakistan often know better than them, but that doesn’t mean that the frustration of those living in Pakistan should be directed at overseas Pakistanis. At times, those abroad know more about something because of interacting with foreign cultures, rules and regulations.”

Mahwash Ajaz also has a comment on Pakistan’s latest love affair with the cancel culture. “Why does anyone have issues with Saba Qamar’s legs, how Alizeh Shah dresses and whether they might not go to paradise for these ‘sins’.” The only solution, in her opinion, is bringing civic sense to social media. “Just as one can’t throw garbage around, one can’t write garbage on social media, since it will show the dirt in your mind. Targetting celebrities is easy because they are public figures and seem rich and famous, even when they aren’t. Before maligning any celebrity, it is better to get all the facts, so that you know the background of the situation before talking about it.”

She compares social media trolls to gangsters of the past. When one gangster was disrespected, his gang members would seek revenge. The same is the case on social media. “If you don’t agree with something and tweet your two cents on it, those in disagreement will gang up and try to tear you apart by bringing up older tweets, personal information and blaming your friends. Things will not change until and unless such practices are stopped legally.”