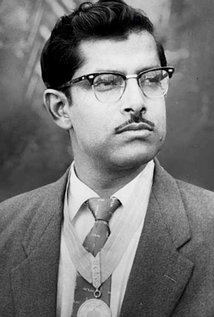 By Omair Alavi Bollywood remains indebted to Hrishikesh Mukherjee, one of the most prolific filmmakers who directed over 40 films in as many years. He was the first Indian film editor to turn to film direction and worked with all the big names from Ashok Kumar, Raj Kapoor, Dilip Kumar, Dev Anand, Rajesh Khanna, Amitabh Bachchan,…

Bollywood remains indebted to Hrishikesh Mukherjee, one of the most prolific filmmakers who directed over 40 films in as many years.

He was respected for being the flag-bearer of ‘middle-cinema’ in India that was neither wholly commercial, nor parallel. Hrishi-da’s films also had one more feature and that was the beautiful soundtrack, which held the plot together.

On what would have been his 95thbirthday, let’s explore 20 of his memorable songs from his entire career that began with Musafir and ended with Jhooth Bole Kauwa Kaate. Happy listening!

In what was his first film as a director, renowned film editor Hrishikesh Mukherjee tried the top actors of his time; since Kishore Kumar was more than a dozen years away from becoming the iconic playback singer, he appeared in the film and sang one of the most popular film songs of the era.

In what was his first film with his friend Raj Kapoor, Hrishi-da followed the usual Raj Kapoor style where he gets to dub on Mukesh’s voice and Shankar – Jaikishan’s compositions. The song may be 6 decades old but it is still as fresh as it was in 1959!

Possibly the first rap song produced in this region, the film revolves around an honest man played by Ashok Kumar. Since the Bollywood star was an accomplished singer as well, Hrishi-da used his vocals in creating a classic that hasn’t aged since.

Rajesh Khanna was already a superstar when he worked in this film and Kishore Kumar had a lot to do with his success; however, music director Salil Choudhury suggested that Manna Dey and Mukesh be used for Kaka who was playing a man suffering from cancer. Even Rajesh Khanna considered this song to be one of the best of his entire career!

Before Kishore Kumar became the masculine voice of Bollywood, there was Manna Dey and the director and the music director used him well in this song, where a dying man addresses life and asks questions about it!

Mukesh stole the show with this song in Anand where Rajesh Khanna played piano for friends that included a lesser-known Amitabh Bachchan who was making his way into Bollywood. Little did anyone know that the two would be cast again in Namak Haraam two years later, where Big B toppled Rajesh Khanna and went on to become even a bigger star!

In this comedy-mystery-suspense drama, Kishore Kumar sings one of his most memorable song for Navin Nischol who had entered Bollywood a few years earlier with consecutive hits.

Before he became known for his comedy films revolving around middle-class Indian families, Hrishi-da was known for to take up serious topics as well and it can’t get more serious than Abhimaan. Amitabh Bachchan was paired with his real-life wife Jaya Bhaduri and they both acted superbly throughout the film – one as an upcoming singer and the other as the jealous spouse.

The film began with Amitabh Bachchan crooning on Kishore Kumar’s vocals and mesmerizing the audience that showed his character’s popularity amongst all, especially ladies. This was one of the final films of Sachin Dev Burman’s career and he was outstanding in the entire soundtrack.

Mohammad Rafi and Lata Mangeshkar were brilliant in what is still considered one of the most soothing numbers in Bollywood’s history; a lean Amitabh Bachchan and a short Jaya Bhaduri might not look like an ideal couple but when it comes to enacting characters, they were on par with each other under Hrishi-da’s direction.

Chupke Chupke was the film where Hrishikesh Mukherjee decided to go all out towards comedy and came up with a film that tackled a case of mistaken identity like never before. Sharmila Tagore plays Dharmendra’s wife who enters his in-laws’ place as a driver to confuse his over-confident brother in law, and he succeeds too!

On one hand, they were Jai and Veeru in Sholay and on the other hand, they were professors of English and Botany in Chupke Chupke. Here they sing a song to please Sharmila Tagore’s character and as a result, they come up with a classic, impressing the audience as well.

What is your reaction whenever you watch something wrong happening around you? Your mind plays the Golmaal Hai Bhai Sab Golmaal Hai song just like it did in Hera Pheri. Hrishi-da and his frequent composer RD Burman were behind this iconic song that rules everyone’s mind and hearts.

Kishore Kumar was at his best in this song filmed on Amol Palekar, who was considered the hero of the poor for his portrayal of a young middle-class Indian in most of his films. The song was declared the Best Song at the Filmfare Awards and still hasn’t aged after nearly 40 years.

With his unique sense of filmmaking, Hrishi-da gave his fans many songs that others wouldn’t even think of including in their films. Here Rekha is telling her elder sister about the rishta they have just received for her and Asha Bhosle’s vocals nail this comic number with her outstanding expressions.

The sister gets married into a household where the mother in law is the dictator; Rekha’s character goes to their house to release them from the reign of terror and comes out a winner, even though an end is put to her antics as soon as the song ends.

RD Burman was a prolific music composer but when it comes to this number, he used it three times in his films; first in Naram Garam and later in Agar Tum Na Hotay and Saagar as Hamain Aur Jeene Ki and Saagar Kinare. Asha Bhosle was at her best here while elder sister Lata was used for the other two versions that went on to become chartbusters as well.

In this hospital drama, Amitabh Bachchan was at his best with his frequent collaborators Hrishi-da, Pancham and Kishore-da; the song went on to become highly popular and is considered an iconic number when it comes to melancholic songs.

Here, the same Amitabh is in a happy mode with Ruby Dutt who played Big B’s love interest in the film, along with Rakhee. Hrishi-da’s team is at their best in the song as well and it remains popular even today after 35 years.

Jhooti was the last hit film by Hrishi-da because soon after, he decided to retire only to make a comeback a decade later with his final film Jhooth Bole Kauwa Kaate. People don’t believe that this masterful composition was created by Bappi Lahiri who was famous for his disco numbers; Kishore and Lata were outstanding in this song that extended Rekha’s career as a leading lady in front of newcomers.