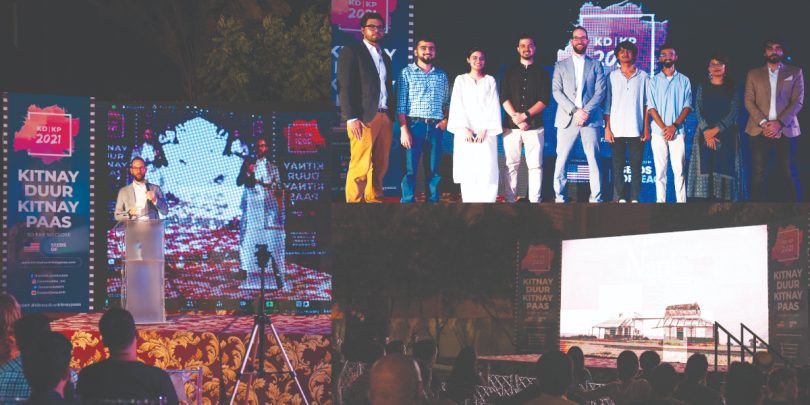 Pakistan and India share a common heritage, their people speak a language that sounds the same, and their issues are identical as well, yet since 1947, they are at loggerheads with each other for different reasons. The US Department of State, in collaboration with Seeds of Peace, tried to bridge that gap between the two nations through their cross-border initiative Kitnay Duur Kitnay Paas 2021, and launched it successfully last week at the US Consulate in Karachi.

Named Kitnay Duur Kitnay Paas (So Far, So Close), the cross-border initiative brought together as many as 42 young filmmakers from India and Pakistan who created art in its shortest form. Not only did the initiative connect the young minds but it also supported their projects, providing them a chance to shine without worrying about the financial aspects of their short films.

That’s why the eight films that were selected for the first year of KDKP21 celebrated the shared history of the two countries instead of showing them at loggerheads. These stories talk about homes, families, communities, societies as well as the culture that links the two countries together, and that’s what makes this initiative integral to the resumption of ties between India and Pakistan.

The New York-based non-profit organization Seeds of Peace was instrumental in coming up with this initiative that gave the freedom to filmmakers they usually don’t get in their own countries. For nearly one year, these filmmakers continued to collaborate with each other and came up with as many as eight short films that highlighted the two countries’ similarities instead of their individuality.

One of the eight films – Nani – was screened at the launch event that was attended by the who’s who of the film and TV industry. From renowned actors like Jawed Sheikh, Sohail Malik, Sanam Saeed, and Mohib Mirza, prominent directors like Nadeem Baig, Mehreen Jabbar, Nabeel Qureshi, and Sohail Javed to music artists Faakhir Mehmood and Fakhre Alam, the top celebrities graced the occasion. Even leading distributor Nadeem Mandviwalla, film producers Javed Jabbar, Hassan Zia, Fizza Ali Meerza, and Kashan Admani were there to support the young filmmakers who might one day venture into the business of commercial cinema.

The US Consul General Mark Stroh who launched the ‘Kitnay Duur Kitnay Paas 2021’ told the attendees that the idea was to bring young storytellers from both sides of the border together so that they can celebrate their shared history and culture, and strengthen the ties between the people of both countries. He even added that the stories on both sides were easily connectable, making it ideal for the young filmmakers to understand each other’s history, through their work.

Three mentors – Haya Fatima Iqbal from Pakistan, Sankalp Meshram from India, and Marcus Goldbas from the United States – were also introduced at the event and were connected to the launch digitally. While elaborating on the idea, the award-winning Haya Iqbal told the audience that the mentors divided the filmmakers into separate groups of three to six people per group and asked them to pitch more than one idea, that revolved around love, and friendship and promoted peace. After their idea was approved, the logistics were decided and the film was shot at the place where it was meant to be.

Each of the eight films that were submitted for the initiative tackled the themes that were relevant to both Indians and Pakistanis. If there was one story Ek Tha Kabootar that revolved around a ‘Pakistani’ pigeon that was captured in India and treated as a spy; there was another one Nani in which a youngster from this side of the border took his grandmother to a village that resembled her birthplace, so that she can die in peace.

The event was a success since the young filmmakers got the chance to mingle with the industry leaders, film critics, and renowned celebrities after the launch. All the short films are available online and after watching one at the event, it made the audience curious about the rest. If one day both India and Pakistan are able to collaborate once again in films, TV, or a digital medium, it will be due to this initiative. Like Aman Ki Asha that earlier brought the two countries close, Kitnay Door Kitnay Paas might do the trick now.