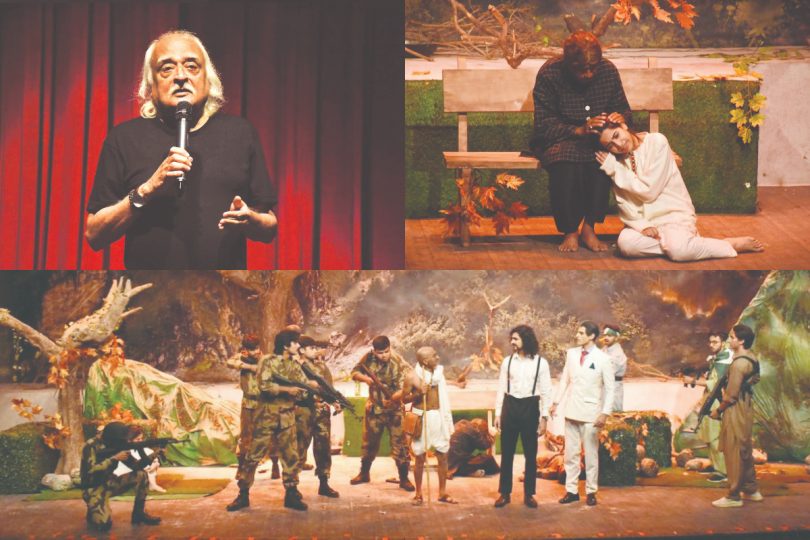 Ten years back Anwar Maqsood started a journey on stage with Pawnay 14 August that reached its conclusion with Sarhay 14 August last week at the Arts Council of Pakistan, Karachi. The third and final part of the 14 August trilogy that also featured Sawa 14 August was no doubt laughter-provoking but lacked the Anwar Maqsood punch that helped the other two dramas become classics during their run. Despite director Dawar Mehmood’s best efforts, the ‘thought’ was missing from the final product and one hopes that it gets better with the passage of time. It is good for those who take it as a single play because it has all the ingredients to make one laugh, and smile but the thought-provoking elements aren’t there.

Sarhay 14 August revolves around the characters of Muhammad Ali Jinnah (Omar Kazi) and Mahatma Gandhi (Tanveer Gill) who were ordered by a British judge to visit Kashmir, Lahore, and Delhi to see the ‘fruits’ of their decision that resulted in the partition of India. They spent some time in these three cities before being summoned to London for the verdict of their case, registered by Winston Churchill, but not before realizing that both India and Pakistan have not been able to start over, despite the initial promise they showed. Whatever the verdict, the two leaders did confess that they respected each other in private but had to curb that feeling otherwise they wouldn’t have been taken seriously as rival politicians.

Without any doubt, Sarhay 14 August is one of the biggest productions undertaken by a theatre company in recent years with over 100 performers, including the actors, who did wonders on the stage. The way the horrors of Partition were performed in the auditorium was mind-blowing as was the central idea of the story that sort of resembled that of international production Jinnah. In that film, Jinnah was accompanied by a narrator to different eras in his life, while here he undertakes the journey with Gandhi in present-day India-Pakistan.

Both the actors playing Jinnah and Gandhi – Omar Kazi and Tanveer Gill – must be commended for staying in their characters for the play’s entire duration, and deserved the applause they received at the end. Tanveer Gill stood out because he had more to do onscreen than Jinnah who had to be shown as reserved, something Omar Kazi excelled in.

The pop culture references, including one-liners regarding political parties, Pakistan Army, Bahria Town, and Narendra Modi, were spot on and even though some of the jokes might be difficult to understand for the younger generation, they served their purpose well. Despite being a low-budget affair, Dawar Mehmood and his team managed to give the ‘Broadway effect’ to this play which usually was seen in either Nida Butt plays or Shah Sharabeel theatre. After Sarhay 14 August, Dawar has taken the lead because his play is not only original, it is in Urdu and caters to more people. It would have been great had he got a bigger auditorium for this version, because of his huge vision.

Introducing new actors is sort of KopyKats Productions’ specialty and they repeated it here as well. Many actors began their theatre careers with this play and would remain indebted to the characters created by Anwar Maqsood’s pen if and when they succeed in their professional lives. Although Sajid Hasan made an appearance as a Sindhi in the final act, and TV actor Hamzah Tariq Jamil as the item song director, there were others led by veteran actor Nazar Hussain who played multiple roles and excelled in it. Youngsters like Sarfaraz Rizvi, Khizr Ansari, Samar Abbas Jafri, Syed Osama, Azad, Mohsin Siddiq, Armaan Sami, and Anousha Naziri must be applauded for their efforts that added colour to the final product.

For one, the play was too long at two hours and it would be helpful if the director cuts it down to KopyKats’ familiar 90-minute duration. There was no need for the item number in the play since it not only broke the momentum but looked odd, especially when Gandhi ends up being a part of it, despite being handed his marching orders from his handler.

Secondly, Anwar Maqsood, who is the only playwright in the country at the moment and  has been making people smile one moment and teary-eyed the next, stuck with the former and forgot the latter in the play. The teary-eyed moments are few and scattered while humour is there from the word go. The ‘moment’ where Gandhi reveals to Quaid-e-Azam how he felt about him could have been done in a better way because it ended up as a ‘bromantic’ moment when it should have been iconic.

Mohandas Karamchand Gandhi might not be every Pakistani’s favourite leader but he was a great leader, not a sidekick who would lose his heart to every other girl, dance around at the drop of the hat, and even break a statue to prove his superiority. Showing him as a buffoon who is saved from the mob due to Mohammad Ali Jinnah’s quick thinking as a lawyer was an insult to the Indian leader who himself was a lawyer and took a stand against racism in South Africa before coming to India.

And finally, something about the portrayal  of Quaid-e-Azam ; the real Quaid wouldn’t have gone into hiding at the sight of terrorists, and neither would have danced in London, which he sadly did in this play.

In the end, he addressed the audience but with the actor just lip-syncing to director Dawar Mehmood’s rendition which looked odd. It was the same stage where Umer Sultan in Pawnay 14 August and Zahid Ahmed in Sawa 14 August won the audience over with their speeches as Quaid-e-Azam, and one hopes that Omer Kazi is able to do it as well, otherwise the director would have to cut it from the play to avoid embarrassment.

On the whole Sarhay 14 August could have been an epic conclusion of a legacy that not only saved the theatre scene in Karachi but also in Pakistan. It may have taken ten years for Anwar Maqsood to write the script, and three years for KopyKats Productions to make a comeback to familiar territory, but it seems that time was not on their side. One hopes that the play gets better with the passage of time so that Anwar Maqsood’s last part of the trilogy is also remembered as something memorable, but he will have to cut down some of the things that might not be helping the play.