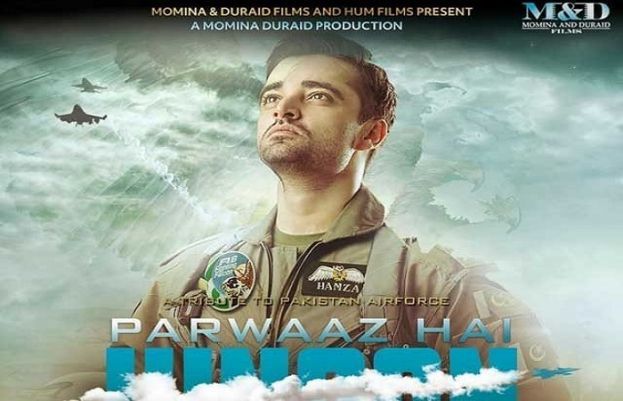 The script would have done wonders on TV, but as a film, it needed more rewrites because in a movie where the biggest villain is a character’s ego you need an upgrade

It was termed one of the best opportunities for the usually-in-the-background Pakistan Air Force to carve a separate identity for itself, but Parwaaz Hai Junoon came out as a telefilm being screened on the big screen.

The script would have done wonders on TV, but as a film, it needed more rewrites because in a movie where the biggest villain is a character’s ego you need an upgrade. There were many positives that came out of the film but when the negatives outweigh the good points, that’s where the makers must realize that whatever path they were on, it wasn’t the best one.

A cast to die for

The film has an ensemble cast that used to be a huge deal back in the 70s; the good part is that each actor gets a chance to perform to the best of his or her abilities be it the dashing Hamza Ali Abbasi, the calculated Ahad Raza Mir, the beautiful Hania Aamir, the methodological Shaz Khan, the charming Kubra Khan and others who have cameo appearances.

Aerial photography does the trick

For the first time in a Pakistani film, aerial photography was used in abundance and it came out well. There were many aerial action sequences that bring back the young men in the audience who have grown up watching Air Wolf. Yes, the CGI and SFX could have been better but look at the big picture here, filmmakers actually went for it in a country where romcoms do the best business!

Be it the snowy mountains of Naltar or the picture perfect PAF Academies, Parwaaz Hai Junoon brings to you the life of PAF cadets and makes you want to apply for the Pakistan Air Force. Most of the film has been shot in the north of Pakistan which is known for its beauty; capturing it perfectly is a job well done by the cinematography team.

Azaan Sami Khan makes an impressive debut as a music director, doing the bulk of songs in the soundtrack with Shuja Haider helping out through Main Ura. Mohsin Allah Ditta’s background score gives you the same feeling as Aamir Munawwar’s in Waar and even matching that is a great achievement.

The makers of Parwaaz Hai Junoon shouldn’t have copied the cadet life from Sunehrey Din as most people in the audience knew the dialogues by heart. There was a mention of APS when it should have been the martyrs of Karachi as a) APS happened after the events of the film and b) it’s a film and people onscreen should take revenge for people dying off-screen, not in real life!

Romance is in the air!

A PAF film that has a romantic track was always going to be a difficult thing; kudos to the director for making us fall in love with the planes in the presence of gorgeous ladies and extremely good-looking parents. However, the romantic dose could have been lessened; the reason why Nishan-e-Haider play ‘Rashid Minhas Shaheed’ is remembered today after 30 years is that there was more air force and less ‘love force’ involved!

Due to the non-linear narrative technique, the film was constantly moving back and forth, confusing the audience. The director must have also been confused as he failed to keep up with the colour of Asif Raza Mir’s mustache which was black in the past and white in the future, with sometimes being vice versa too.

Not escaping the ‘TV’ syndrome’!

The confrontational scene between father and a son is too 1990-ish and takes away from the PAF factor. The father was shown to be a retired military man but came out as a mixture of Dilwale Dulhania Le Jayenge’s Amrish Puriand Kabhi Khushi Kabhie Gham’s Amitabh Bachchan. It would have looked good on TV but not in a PAF film; the climax was too telefilmi and could have been handled better.

Parwaaz Hai Junoon needed two things to succeed – Parwaaz and Junoon. While the former was there in the form of flying sequences, the latter seemed lost in the clouds. With a script that would have raised the ratings on TV in the final week, this Momina and Duraid film missed the trick big time. It could have gone to become one of the best pictures ever produced in Pakistan but for that, you have to have a solo release date, an overhauled screenplay and an execution that evokes passion than a worried look.