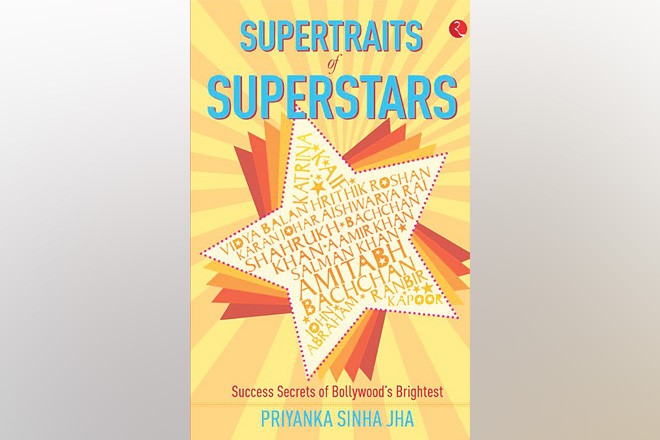 Did you know that Amitabh Bachchan is hardly late on a film set, even now in his 70s? Or that before becoming Mr. Perfectionist, Aamir Khan delivered a series of flops in the 90s? Or that Shah Rukh Khan was hesitant to do films and was content on TV even when Salman and Aamir had made it big in films? Priyanka Sinha Jha’s Supertraits of Superstars takes you into the private lives of Bollywood actors who had to work hard and beat the odds to achieve success in their careers.

This book is not just a trip down the memory lane but also one that gives you hope about yourself. No one would have believed that the son of a renowned poet would surpass his father in the future, that a struggling TV actor with no place to live would become the biggest star in the world, that one beauty queen would go onto become the face of Bollywood and represent India globally! This book talks about what separates them from other actors in Bollywood and how people can learn a lesson or two from their struggles.

Out of the many luminaries in Bollywood, the author picks up the most relevant 11 that are a) known to the current generation and b) have achieved greatness through hard work. She has been fair in discussing people from Amitabh Bachchan to Aishwarya Rai, Shah Rukh Khan to Salman Khan, Vidya Balan to Katrina Kaif and Hrithik Roshan to Ranbir Kapoor. If you didn’t know about Big B’s professionalism, SRK’s struggling period, Vidya Balan’s rejections and Salman Khan’s generosity, then this book will make you understand the struggles of Bollywood stars.

Like most of the books on Bollywood celebrities, this one has been divided into several chapters, each one covering a celebrity who is known to fans of Indian films. Be it Amitabh Bachchan, John Abraham or Katrina Kaif, everyone gets equal mileage and every ‘supertrait’ in their life is discussed at length. If you thought that SRK was born with a silver spoon, this book breaks the myth; if your friends thought that Big B is going weak with advancing age, this book will make you realize that he is, in fact, getting stronger. What Ranbir Kapoor did before making his film debut will surprise you for sure.

However, there is an observation that the author sometimes goes overboard in her praise of her favorite actors and colleagues, considering she has been around for two decades as an entertainment journalist. Yes, these people are superstars and might even possess superpowers but to portray them all as super human is a little too much. She could have described some negative traits of these individuals that could have told the audience that even superstars have weaknesses.

Yes, the setbacks and the struggles are mentioned but the successes take over big time, confusing the readers on a few occasions. But then, showing them as losers wouldn’t have had the impact this book had in the end. It can serve as a guide for all those aspiring individuals who want to achieve greatness in life but don’t get the required encouragement. One look at the struggle of K. Jo (yes, he did struggle initially) or John Abraham will give you success goals because they reached rock bottom, only to come back and touch the stars. The narrative has been penned in a simple manner and that’s one of the reasons why this book is encouraging and not to be missed.