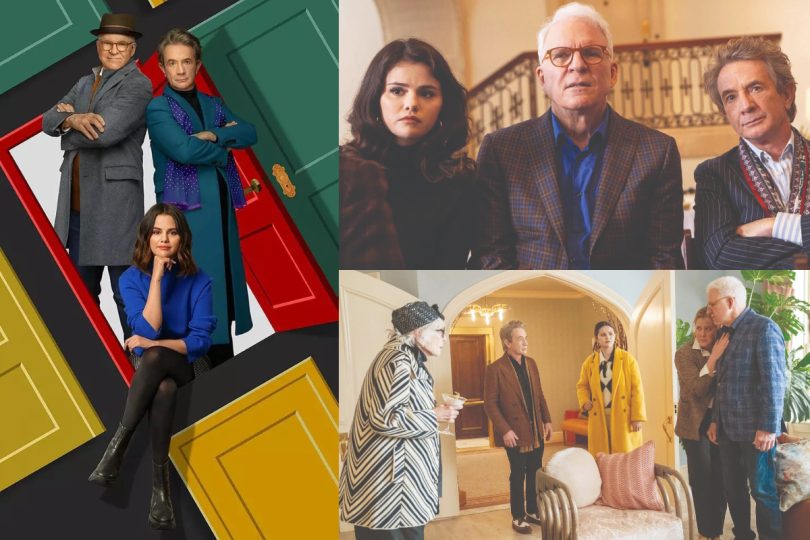 The second season of Only Murders in the Building even surpasses the first one with its well-rounded mystery and solution!

Rarely is a hit TV show’s second season bigger, better, and more fun to watch than the first one. But when you have actors like Steve Martin, Martin Short, and Selena Gomez in one frame, with one of them ‘framed’ for a murder she didn’t commit, then not much can go wrong. Exceeding all expectations, the second season of Only Murders in the Building will go down as a series where everything improved with the passage of time, and murder-solving became more interesting and interactive.

The second season of the series returns with detective podcasters Charles-Haden Savage (Steve Martin), Oliver Putnam (Martin Short), and Mabel Mora (Selena Gomez) arrested for a crime they didn’t commit. Since the police couldn’t link them to the murder of Arconia’s cranky co-op board president Bunny (Jayne Houdyshell), due to lack of evidence, they are left to solve the case themselves. The season focuses on different aspects of the trio’s backstory as well as providing the audience an insight into Bunny’s life, which becomes the topic of the already-hit podcast Only Murders in the Building.

Cinda Canning (Tina Fey) on the other hand feels that the trio isn’t innocent and launches the ‘Only Murderers in the Building’ podcast to prove her theory, with the help of her abused assistant Poppy White (Adina Verson). However, the trio that solved the murder in the first season had help in the shape of a talking parrot, a missing painting, passages within the building, and a growing list of suspects that includes those already behind bars.

Only Murders in the Building may have begun as a mystery series in the vein of the classic TV shows of the 1970s and 1980s (not Brazzos) but it has grown into something bigger. From Steve Martin to Martin Short to Selena Gomez, everyone looked their part and acted as if they were characters in a real building instead of actors playing those characters.

Steve Martin leads the pack not because he is the co-creator of the show but because his character Charles-Haden Savage is someone we all know – a former celebrity who wants to go down fighting. On the other hand, Martin Short is brilliant as Oliver Putnam, the former Broadway director who has his own issues to deal with and lights up the screen whenever he is in trouble. As for Selena Gomes who seems to have ‘become’ Mabel Mora in the course of the series, she is most overtly dramatic because it was her apartment in which Bunny was killed, and she was the last person to see her alive.

This show, like any good TV mystery, deals with the who, the why, and the how a murder was committed and despite being involved in one way or the other, the trio jokes about the case, until it gets serious. The bromance the two Martins share is the highlight of the show, one that made their films The Three Amigos and Father of the Bride so successful.

The writing is excellent and so is the execution, giving every character besides the trio something that makes them human. Be it the new mother and board president (Christine Ko), the vastly talented doorman (Teddy Coluca), or friendly detective (Da’Vine Joy Randolph), or Charles’ double (Jane Lynch), they all have something to offer, without distracting the viewers.

Not everything was perfect in the corridors of the Arconia though; why wasn’t the building’s new board president Nina present in the meeting where the killer was apprehended? What happened to the design changes she wanted to make in the building that might change Arconia forever? Why was Marv suddenly following the trio in the blackout episode and drawing suspicion towards himself?

If that’s not all, the arc between Oliver and his son wasn’t needed at all, especially with so much going around ‘behind the walls’. Also, why did the bad guys of the last season – Theo Dimas and Jan Bellows – turn over a new leaf this season, and where did Arconia resident Ndidi Odoko and Mabel’s friend Oscar Torres go after the end of the first season? These questions were left unanswered after the season ended and one hopes that the audience doesn’t forget them when the show returns next season.

Created by Steve Martin and John Hoffman, Only Murders in the Building went from good to better, and with the inclusion of a ‘marvelous’ actor, is all set to become the best next year. It is beyond doubt a great addition to the world of murder mysteries that has everything the audience never knew they were missing.

Why the second season was better than the first has more to do with developed characters than developing ones, and when the trio is told that because of being persons of interest, they should not play sleuths, they do exactly that to clear their names. The episode that focuses solely on the victim is so intelligently produced that it adds a new dimension to the series, making the viewers take note of everything that happens on what proved to be the last day of the character.

The best part about the second season is that it combines the elements of suspense, thriller, comedy, and murder into one so that it caters to all kinds of audiences. The climax sequence is so intelligently done that everyone feels surprised and happy at the same time. Add to that the return of Shirley Maclaine as a mysterious character, stand-up comic Amy Schumer replacing Sting as one of the residents, and Cara Delevingne making her appearance as a shady art gallery owner, and you have ten episodes worth of content that doesn’t disappoint.