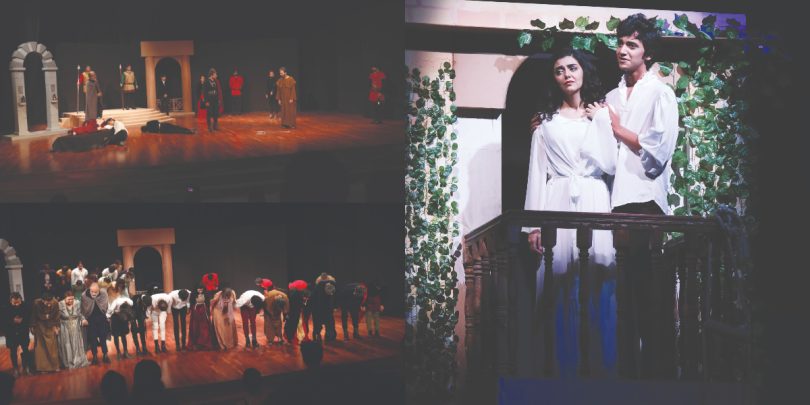 Shakespeare’s Romeo and Juliet is not only one of the most loved theatre plays but also amongst the most adapted ones around the globe. From England to India, whenever a producer lacks ideas, he goes ahead and makes his own version of the play, resulting in a sure-shot hit. However, the Urdu adaptation at NAPA fails to hit the bull’s eye and comes out as a student play supervised by the legendary Zia Mohyeddin, not one directed by the great thespian.

The tragedy revolves around two rival families Montague and Capulet and their youngsters Romeo and Juliet (Ali Sher and Noreen Gulwani) who fall in love after meeting each other at a ball. With the help of Friar Laurence (Samhaan Ghazi) the two get married, hoping that their marriage will improve the relations between the families. However, the day after their union, Romeo kills Juliet’s cousin Tybalt (Mehroz Gul) who had earlier murdered Romeo’s pal Mercutio (Fawad Khan) in cold blood.

After the Prince (Zubair Baloch) banishes Romeo from the city, Juliet’s parents (Farhan Alam Siddiqui and Zarqa Naz) accept Count Paris’ proposal and tell their daughter that she has no option but to marry the count. A desperate Juliet turns to Friar Laurence for help who gives her a potion that would make her ‘dead asleep’ for a few hours until Romeo returns to reclaim her. However, Romeo arrives too early and drinks poison in front of a sleeping Juliet, thinking she has died. Juliet, on the other hand, wakes up only to kill herself with Romeo’s dagger, so that the two could be together in the afterlife.

Noreen Gulwani’s Juliet was easily the highlight of the play as she carries herself like an upper-class teenager who falls in love at a very young age. She not only looks beautiful but is the epitome of grace. In front of the always-dependable NAPA regulars Fawad Khan, Farhan Alam Siddiqui, and Bakhtawar Mazhar, she manages to carve a separate identity for herself which is no mean feat.

Watching Bakhtawar Mazhar as Juliet’s nanny was a treat since she was making a comeback after a few years but seemed as if she never left. Fawad Khan and Raheel Siddiqui as Romeo’s friends Mercutio and Benvolio respectively were perfect as they were both mischievous and concerned at the same time. The rest of the cast was also able to convince the audience that they were back in the days of Romeo and Juliet with their act, so natural was their performance.

As for the sets, their mobility can be considered the best thing about them, as the stage could become anything in a dozen seconds. Be it Juliet’s balcony or Friar Laurence’s place, the simple background could fit any location, without looking out of place.

At times the play looked dated and at times it looked modern; what else would you say if in one sentence the character termed Thursday Jumeraat and in the next, it became Panj Shamba. Most of the dialogues in Urdu were so hard to understand that at times it seemed even the actors didn’t know what they meant. Since most of the people in the audience were students, the puzzled look on their faces after the show said it all.

And when the audience laughs at a Shakespeare tragedy, that is nothing less than a tragedy itself. Some of the dialogues were below the belt but could have been avoided since Zia Mohyeddin’s name was attached to the play. Why ‘strange’ music at the climax was played is something many in the audience still want to know.

And finally, there was the lead actor Ali Sher who despite being too young to carry a play took over the responsibility and did extremely well. His only problem was resembling the Zia Mohyeddin of the 1970s, one who played the lead in the Urdu film Mujrim Kon. Not only did he walk like his director but even spoke like him, and if one closed his or her eyes, they would have mistaken him for Zia Mohyeddin. He even dressed more like Zia Mohyeddin than Romeo, and if he wants to grow as an actor, he has to explore himself rather than do what the director wants him to do.

Staging any Shakespeare play is always a difficult task and the team at NAPA must be commended for doing a fantastic job. However, they could have taken a little more time to polish the performance as well as the script which lacked the finesse expected from a Shakespeare play. The difficult words in Urdu could have been replaced with easy-to-understand ones so that youngsters would be able to relate to it.

Veteran actor and Head of Theatre Arts at NAPA Khalid Ahmed, who had earlier done a great job in making King Lear a perfect play, seemed to be pressed for time on this occasion. Otherwise, nobody understands theatre better than him, and his scripting is beyond doubt the reason why he is relevant to all generations. He has taught the best actors in the country and continues to produce quality talent at NAPA, and one hopes that the youngsters in this play manage to perform better on other platforms so that they can make their teachers proud.