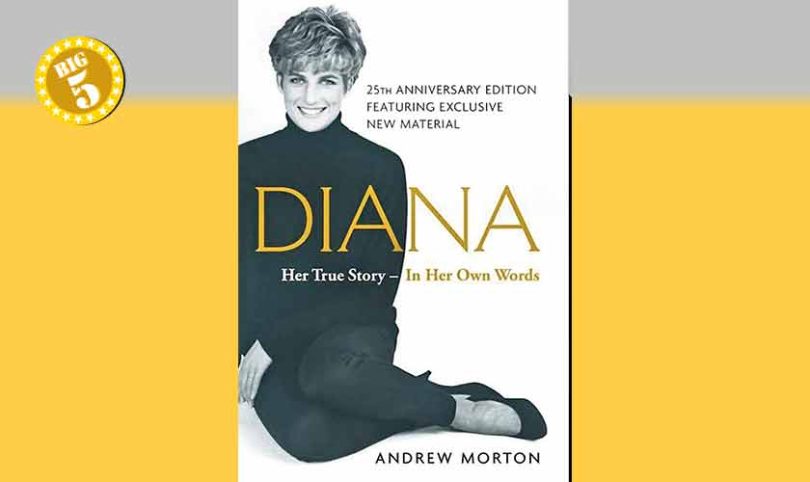 Netflix’s The Crown is indeed one of the most-watched and loved series on the streaming service. Even if you aren’t familiar with the ways of the monarchy, it keeps you engaged in the Royal Family’s business. Most of the events depicted onscreen are closer to the truth than fiction, however if you want to know more about them, the best way is to delve into the world of books. We can assure you that once you are done reading, you’ll practically feel like a part of the Windsor family. Happy reading!

Wallis in Love: The Untold Life of the Duchess of Windsor, the Woman Who Changed the Monarchy (Andrew Morton)

Numerous books have been written on the abdication of King Edward VIII, but not many have tackled the reason why and how he fell in love with Wallis Simpson in the first place. Andrew Morton’s Wallis in Love: The Untold Life of the Duchess of Windsor, the Woman Who Changed the Monarchy takes you back in time and introduces us to a simple Wallis, who belonged to a broken family in the States and ended up breaking the Royal family in Britain. How she spent her childhood, got married twice, and what were her aspirations before she moved to the United Kingdom, this book tells us all. Not only will you get to know how she mistreated her two husbands, how she used her friends and family to gain access to the future King, and how his stubbornness resulted in the abdication and their exile. The matter was given screen time in both The Crown and The King’s Speech but the way the author describes the issue in this book makes it a must-read!

If Wallis Simpson was the ‘other woman’ as per the Queen, then Lady Diana was the one who should have gone to become the Queen. She had everything that was a prerequisite of a Princess – she was a beautiful woman, a loving mother, a dutiful wife, and was loved by all. However, the only thing she didn’t have was her husband Prince Charles, who was in love with another woman, Camilla Parker Bowles. An ‘autobiography of sorts’, Diana: Her True Story is Andrew Morton’s bestseller which came out in 1992 and showed the real face of the monarchy, where a daughter-in-law had no friend in the house, the wife had no say at all and the husband could get away with anything. Princess Diana was not only actively involved in the publication of the book, but she also spoke her heart out to the author about the difficulties of living inside the House of Windsor. The fully revised edition features new material provided by the author who revisited the secret tapes twenty-five years later to keep Diana’s memory alive in the hearts and minds of her followers.

The Queen: Elizabeth II and the Monarchy (Ben Pimlott)

Ben Pimlott’s biography of the Head of the Commonwealth may not have been the perfect reply to Andrew Morton’s books, but it did help present the human side of Queen Elizabeth. The updated version, released ahead of the Queen’s Diamond Jubilee celebrations, gives an insight to the ruler who has been around for almost seven decades and has seen more highs than lows in her life as a monarch. Besides discussing the controversies that have taken place during her Royal Highness’ reign, the author also talks about the Queen’s many achievements. Using a wide range of sources – including interviews, diaries, and even papers from inside the Royal Archives – he’s managed to bring forward the lesser-known side of the Queen. After going through this book, you will have a change of heart regarding Queen Elizabeth, who is usually portrayed in a negative light onscreen, instead of the ruler who has the responsibility of an entire country.

And then there is the Prince who married the perfect woman but fell in love with another; his extramarital affair and the subsequent death of his ex, made Prince Charles the most humiliated member of the Royal family since Prince Edward VIII. Tom Bower’s Rebel Prince: The Power, Passion and Defiance Of Prince Charles portrays him as someone who can’t bear criticism, allegedly changes his clothes five times a day, and travels with his own toilet seat! His only achievement according to this book, is that he ‘overtook his great-great-grandfather Edward VII as the longest-waiting heir to the British throne’, which is not something to be proud of. Almost all his comments have been scrutinized publicly, especially after he said, ‘nobody knows what utter hell it is to be the Prince of Wales’ in 2004; his accession is the most-loved topic of the modern generation and as per this book, he prefers the ‘left profile of his face more than his right’. The author relies on the testimony of over a hundred people close to the Prince, and reveals a lot of ‘royal rumblings’ that weren’t known to the British public.

The latest entrant into the Royal family is the most controversial one, but this book talks about Meghan Markle before she became controversy’s favourite child. We are well aware that Markle was a successful TV actress before she married Prince Harry and American Princess: The Love Story of Meghan Markle and Prince Harry discusses in detail that part of her life. It takes you on a journey of a young girl, who was born to a white father and an African American mother. She wanted to become famous on her own terms and definitely made a name for herself before marrying the Prince. Though she was married before, she managed to win over Prince Harry’s heart, surprising many; something which this book explains best. The Chicago Tribune described Leslie Carroll’s books on royalty as ‘an irresistible combination of People Magazine and the History Channel’, and fans of both or either one will have a field day while going through this one. This book also talks about Britain’s rule-breaking royal marriages that took place in the past, love matches that fizzled out before making it to the altar, besides the amazing journey of a celebrity who became royalty after marriage!