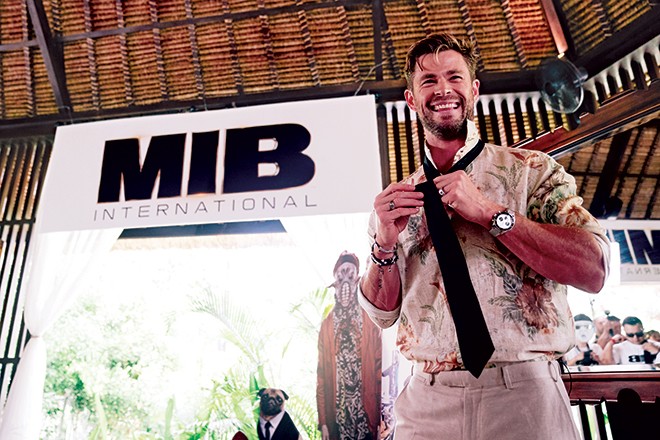 Known best for playing ‘God of Thunder’ Thor in the Marvel Cinematic Universe (MCU), Chris Hemsworth sits down for an exclusive with Instep and talks about trading his Hammer for a Neuralyzer in Men in Black: International.

There are actors, there are heroes and there are superheroes. Meeting the one man who personifies all three rolled into one was like a dream come true, especially since I haven’t missed a single Chris Hemsworth movie since his feature film debut as George Kirk in Star Trek (2009). His was quite the intergalactic foray into films as he quickly rose to immortal status as the mighty Thor in 2011.

In between playing an Avenger, Hemsworth was seen in Rush as the arrogant James Hunt, the Huntsman in Snow White and the Huntsman and Into the Heart of the Sea as well as the only male star of an all-female Ghostbusters reboot in 2016. Needless to say, his most famous role to date is Thor, and nearly every Pakistani knows and loves him as a superhero because of the endearing combination of good looks, wit and power he brings to the screen.

Instep on Sunday had a chance to chat with the Hollywood hunk in the Indonesian city of Bali, where he was promoting Sony Pictures’ upcoming film Men In Black: International. It was during the chat we spoke about his thoughts on working with Will Smith in a Men in Black film, how he prefers the Neuralyzer over the Hammer these days and whether he has any idea how much female fan following he commands in Pakistan.

Excerpts of our conversation…

Instep: You were 14 years old when Agent J and Agent K used the Neuralyzer for the first time in Men in Black. Did you know then that one day you would be part of the franchise, leading the Men in Black into another direction altogether?

Chris Hemsworth (CH): (Laughs) I didn’t. When I was 14, I didn’t even know that I wanted to be an actor, or I hadn’t even thought about it. I just loved movies and as a kid wanted to live in those worlds – the world of Men in Black, Lord of the Rings or whatever I was watching. And yes, it’s quite strange now that I am taking the franchise forward. (Thinks hard) I didn’t realize I was 14 when the first one came out!

All I can say is that it has all been bit of a trip for me – the Marvel Experience and now this. Being employed as an actor and to be working with the people I have worked with; the whole thing has been great.

If you had asked me 10 years back regarding my dream scenario or where did I hope to be in 10 years’ time, I would have had no idea. For the first time, I am enjoying myself in my career and not looking ahead, like what would happen if I do this or if I do that! I feel like I can do this for the rest of my life because I feel comfortable in the present. It’s a live-in-the-moment experience for me and I enjoy and appreciate every moment of it.

Instep: Men in Black: International seems like a fun film; care to share some behind the scenes details with us?

CH: Well, I can tell you about my favorite scene where I am riding the hoverboard with Tess (Tessa Thompson) on the back. It was quite a ride as I had to move around the bazaars of Morocco and all, and trust me, I could have done it the whole day.

Chris Hemsworth as God of Thunder in Thor: Ragnarok (2017).

Instep: One part of the original Men In Black pair – Will Smith – is still acting and Aladdin featuring Smith as the Genie has done quite well at the box office recently. Is there a chance of you and him teaming up to save our world from aliens?

CH: I would love to and yes, it’s possible. I am part of the London branch of MIB whereas those guys still exist in the same universe, only in America. It would be fantastic to link up with them and make another MIB movie with ‘them’ and ‘us’, fighting together to save our planet and wiping people’s memories.

Instep: You got to work with such a huge cast in the film, including Liam Neeson, Emma Thompson, etc. How was the experience?

CH: I love Emma Thompson because she has the wackiest sense of humor. I met her many years ago but finally got to work with her now. She is kind, collaborative and not intimidating to work with, as she likes to put her co-actors at ease. It is people like her and Anthony Hopkins (who plays my father Odin in Thor) who are gods of acting but in real life, they move around with humility. We all know how good they are but still, they carry that sense of doubt that ‘whether I am any good’ or ‘if that will be my last job’. I would very much like to be like that, asking myself ‘am I enough’ because that’s what keeps you grounded.

Instep: Given the choice, which one would you choose – the Hammer or the Neuralyzer?

CH: (Thinks hard) Aaaaaaah. I haven’t used the Neuralyzer that much so will go with it. I have used the Hammer a lot of times and also have a scene here in Men In Black: International, which is actually quite funny (smiles).

Instep: And if you could walk away with one thing from the sets of Men In Black, what would it be?

CH: The car. Of course, the car. The JAG (Jaguar). I expected that they would present it to me, gift wrapped at the end of the film, but they didn’t (smiles)!

Instep: Action-comedies are quite a thing these days; how do you feel about this particular genre?

CH: I love doing comedy especially when combined with action. But let me tell you, it’s tricky to be funny as there are things that play well, and things that don’t. You never know how the joke is going to land. My next film is also a comedy while after that, Dhaka is a heavy action drama. I believe that in order to appreciate yourself, you must do something you haven’t done before. That’s why I am thinking of doing something without any action or weapons, something character-driven next.

Instep: Why did you go for Men In Black: International at a time when you have created such a strong name for yourself as Thor, the God of Thunder?

CH: You always want to do something different with each character. I have spent so much time doing fantasy world, I’ve experienced the period-esque Thor and even done a race car movie. This was something I hadn’t done before and that’s why it was fun to do something contemporary. I am proud of carrying forward the legacy with the swaggers, cheekiness of the originals.

CH: You always want to do something different with each character. I have spent so much time doing fantasy world, I’ve experienced the period-esque Thor and even done a race car movie. This was something I hadn’t done before and that’s why it was fun to do something contemporary. I am proud of carrying forward the legacy with the swaggers, cheekiness of the originals.

Instep: Do you know that you have a huge fan following in Pakistan, especially amongst females?

CH: Oh, really, I had no idea but thank you very much. I greatly appreciate it.

Instep: At the end of the day, you are an Aussie at heart and cricket must be in your blood. Tell me, who do you think will win the World Cup?

CH: Australia mate, Australia. Have to say that!