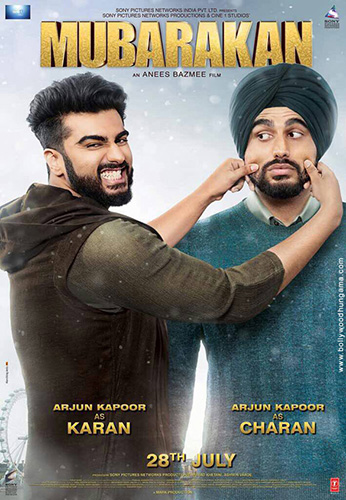 By: Omair Alavi Move over Rishi Kapoor and Ranbir Kapoor – there is a new set of Kapoor in town. Unlike the father-son duo, this couple comprises of Nephew – Uncle and through Mubarakan, they have set the house on fire. Anees Bazmee unites Anil Kapoor and Arjun Kapoor through his double-role saga where the relationship…

Move over Rishi Kapoor and Ranbir Kapoor – there is a new set of Kapoor in town. Unlike the father-son duo, this couple comprises of Nephew – Uncle and through Mubarakan, they have set the house on fire. Anees Bazmee unites Anil Kapoor and Arjun Kapoor through his double-role saga where the relationship is king and everyone has a love or hate relationship with everyone else, making the audience go crazy with mishaps and identity crisis!

Bachelor Kartar Singh (Anil Kapoor) becomes the legal guardian of his nephews Karan and Charan (both Arjun Kapoor) after their parents die in an accident. He gives one kid to his sister in England (Ratna Pathak) and the other to his brother (Pavan Malhotra) who raise them as their own. Problems arise when the kids fall in love and the family wants to get them married elsewhere. Karan sends Charan in his place while Charan ends up being engaged to Karan’s girlfriend Sweety (Ileana D’Cruz). Add Binkie and Nafisa (Athiya Shetty and Neha Sharma) and you enter a mess that is impossible to clean. Kartar is called to intervene and he ends up making the situation even worse but in his usual funny style. Watch it to know what goes wrong in this Sikh household that is mature one moment, and immature the other.

Anil Kapoor makes the role of Kartar Singh his own as he goes from making a mess whenever he is asked for help. His chemistry with Arjun Kapoor is the highlight of the film as they both complement each other. Ratna Pathak and Pavan Malhotra are supremely talented actors and the way they interact is typical of a brother and sister living apart – they love each other but when they are not talking, they are at their best. The film gives Ileana D’Cruz and Neha Sharma a platform to show their talent and they don’t disappoint as girlfriends to both Arjuns. The jokes may seem clichéd to some but the spontaneous laughter they help the audience generate is something that’s missing from the ‘adult’ comedies of today.

Athiya Shetty has nothing to do in the film and a Chinese Vase could have played the role instead – as said by SRK in his latest flick. She is the weakest link in the plot because the rest of the people end up doing a better job than the daughter of Suniel Shetty! The songs don’t have a recall value considering two of them have been copied – Hawa Hawa and the title track from Hasan Jehangir’s Hawa Hawa and Yamma Yamma from Ramesh Sippy’s Shaan. Unlike the comedies of yesteryears, the soundtrack could have included a few songs that you could play 20 years later as well. The length of the movie is also a little long but then you don’t get to check your watch much during the film. For some, the plot might seem like a whirlpool but trust me, it isn’t as everything is resolved by the time the end credits come on screen.

Writer/director Anees Bazmee is back in his usual style and takes the audience back to the era of David Dhawan comedies while not missing the 2017 touch. The way he films Arjun Kapoor sequences are remarkable, considering the two Arjuns talk to each other and react as if they are two different people. The script may seem to drag a little but when you get a load of laughter after every few minutes, you don’t mind the delay. A must watch for the fans of 90s comedy and of Anil Kapoor who continues to grow young with the passage of time!