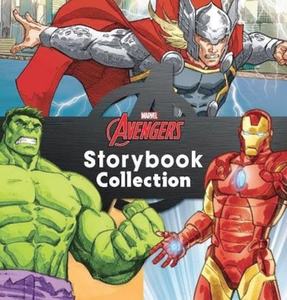 They might be the Earth’s mightiest heroes but even they have an origin story; what made Black Widow become part of the Avengers? How Falcon managed to earn his wings that enable him to fly? What makes Thanos the mightiest villain of all?

Answers to these questions can easily be found in this latest edition of Marvel Avengers Storybook Collection that is here to make your day.

This awesome collection of superhero tales features as many as eight adventures where the Avengers have saved the world. From Red Skull to Thanos, from Loki to Frost Giants, they battle against all of the super-villains who want to take over the world to expand their evil forces.

However, their biggest challenge was when Thor led an army of Asgardians to Earth, and without one of their main members, the Avengers were at a loss. They were also helpless when Thanos attacked them in space with his army, when he stole the Sword of Histria or when Sam Wilson sent for help while stranded at the Isle of Exiles.

Since they are the best in the world, with or without superpowers, they know how to use the situation to their advantage and that’s how they manage to win each and every battle mentioned in this book.

Marvel Avengers Storybook Collection is a collection of comic-style illustrations and easy-to-understand text so that young readers out there can familiarise themselves with the characters. It also teaches us a lot of things, including the value of teamwork, trusting your friends and listening to those who might not seem privileged but might have the solution to your problem.

In one of the adventures, the team realises the importance of not goofing around as one of your stupid acts might put others in jeopardy; in another we get to learn that it is always better to outwit your opponent than taking him or her lightly.

With the world gearing up for the upcoming Black Widow film and the Falcon and Winter Soldier TV series, this book might be a good addition to your library. It shows how in order to save her brother did Natasha Romanoff changed sides, how the superheroes of Earth saved the planet from another invasion from Ultron, and how SHIELD Agent Phil Coulson was a central figure of that adventure. Everyone gets to play their part in saving the planet and we can spread the word so that the next time something similar happens, we will be ready. Avengers assemble!