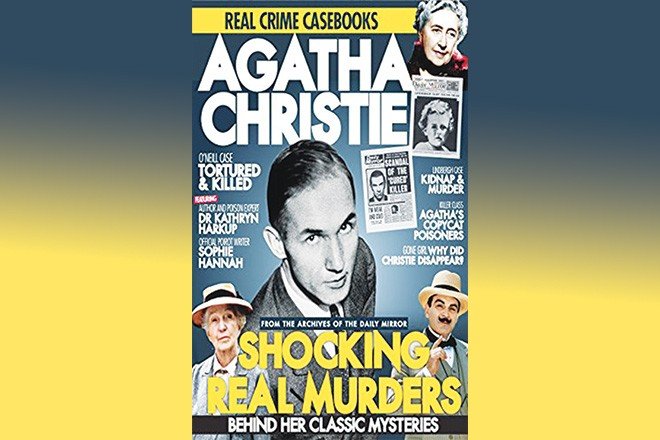 In The Mirror Collection – Real Crime Casebooks, the celebrated author’s mysterious life is discussed at length, including how she created her most loved characters and the inspirations behind some of her best novels.

The world of fiction remains indebted to ‘Queen of Crime’, Dame Agatha Christie, who is still loved and followed more than 40 years after her death. Not only is she more published than any other mystery writer in the world, her life was full of mystery herself.

In The Mirror Collection – Real Crime Casebooks, the celebrated author’s mysterious life is discussed at length, including how she created her most loved characters, the inspirations behind some of her best novels and her 11-day disappearance that continues to baffle the best detectives.

This book tells you all about the creation of Belgian detective Hercule Poirot and the legendary Miss Marple, her two most loved characters. Agatha Christie is said to have developed both from personal experience – Poirot from the many Belgian refugees that lived in her hometown during the First World War and Miss Marple from partly a character in The Murder of Roger Ackroyd and partly from her own grandmother. A comparison between the two is the closest they ever got on one page because their creator wanted them to stay away from each other as much as possible.

The book also provides considerable detail regarding the actors who played these characters on screen, with David Suchet and Joan Hickson winning it by far, through a ballot conducted by modern mystery writers. Most interesting is the part where Agatha Christie gives her opinion on those who played these characters. When she was alive, Agatha Christie told Joan Hickson that she hopes that one day she (Joan Hickson) would play Miss Marple, long before the actress actually did, after the author’s death in 1976.

Readers also get to know that the writer behind 66 detective novels and 14 short story collections besides a number of plays, actually took the inspiration from real life cases. This book takes a look at some true-crime headlines that inspired the author to give a satisfying end to cases that either resulted in someone’s death or remained unsolved. With the help of features and photos from the archives of Mirror, readers are told that the record-breaking play – The Mousetrap – was inspired from The O’Neill Case where a couple of foster parents were responsible for the death of one of their two foster children. The kidnapping gone wrong of Charles Lindbergh Jr made her come up with Murder On The Orient Express with Monsieur Poirot solving the case, but with a huge twist in the end.

The book also details the countless occasions where Agatha Christie’s plots – involving murder through poison – actually saved lives or helped solve a case in real-life. Be it the kid from Qatar or the mass murderer who used poisons like the killers in her novels, Agatha Christie inspired many to become detective themselves, even if for a short duration, to save lives. Not just that, she used as many as 14 locations near her place (a map is provided for guidance) as fictional places where her Hercule Poirot traveled and solved cases; for Miss Marple, the good old St. Mary Mead was enough for solving crimes.

And then there is the detailed explantation created from eyewitness accounts regarding Agatha Christie’s mysterious disappearance for 11 days. Some say she suffered from amnesia, others comment that she went AWOL because of her husband who wanted to divorce her after 14 years of marriage. Whatever the reasons, the book makes you understand that the disappearance helped Agatha Christie get rid of her husband who went on to marry his mistress, leaving Agatha Christie at peace. Interesting, isn’t it? More interesting are the remaining chapters in this collection where prolific writers discuss Agatha Christie’s influence on their careers, how many poisons she used in her stories and the catalog of crime at the end that will keep you engrossed for some time. Happy reading!