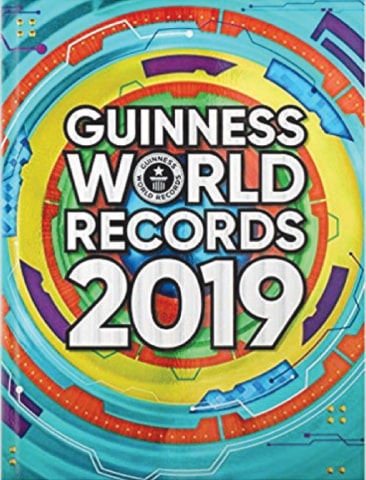 Or the largest family reunion consisted of 4,514 members of the Porteau–Boileve family assembled in Vendee, France? And despite winning 20 Grand Slam titles, Roger Federer is still four short of becoming the tennis player with most Grand Slams?

Don’t believe me, believe the latest edition of Guinness World Records 2019, that will surprise you every step of the way!

What makes this edition better than the last one? According to the editor, the Record Management Team logged an incredible 38,205 applications in the last 12 months and that is something beyond the expectations of even the GWR team. Each category has an interesting introductory page where you have to search for the Table of Contents as the astonishing picture spread over two pages always grabs your attention.

Also, there is a very interesting section titled ‘Making History’ where with the help of LEGO, inventors and hobbyists have created iconic buildings like Statue of Liberty and Eiffel Tower, huge machines like The Wright Flyer and Bucket-Wheel Excavator and even the Millennium Falcon to show the readers that nothing is impossible. What makes these LEGO creations all the more exciting is the text about the original, which is too interesting to miss!

Unlike the last few editions of the quintessential record book, this one takes a giant leap and celebrates the Maker Movement by letting the readers Meet the Makers in one of its new series. Here you get to meet folks behind some of the most unusual records made in the last 12 months, so don’t be surprised if you find yourself staring at the Largest Yo-Yo, Largest Hamburger, Largest Rubber-band Ball, Largest Origami Rhino, Largest Display of Tooth Pick Sculptures, Fastest Jet Powered Go-Kart, Largest Skateboard, Largest Rube Goldberg, Largest Water Pistol and/or the Largest Rideable Hexapod.

Also, the holders of records such as the person with the longest fingernails (ever) or that of the tallest/shortest person, also get mentioned throughout the book that will grace the shelves of all those who love to stay updated till the record book’s next edition in 12 months’ time.

Guinness World Records 2019 may not be a book that tells you about the future, but it surely has something for everyone. The animal lovers would love the sections tackling animal life, be it those of existing mammals or extinct dinosaurs; the sports fan have their own section that deals with statistics and records; for those interested in arts and entertainment, there is a colourful section that tells you what records Madonna, Taylor Swift or Robert Downey Jr. hold, all within a space of a few pages.