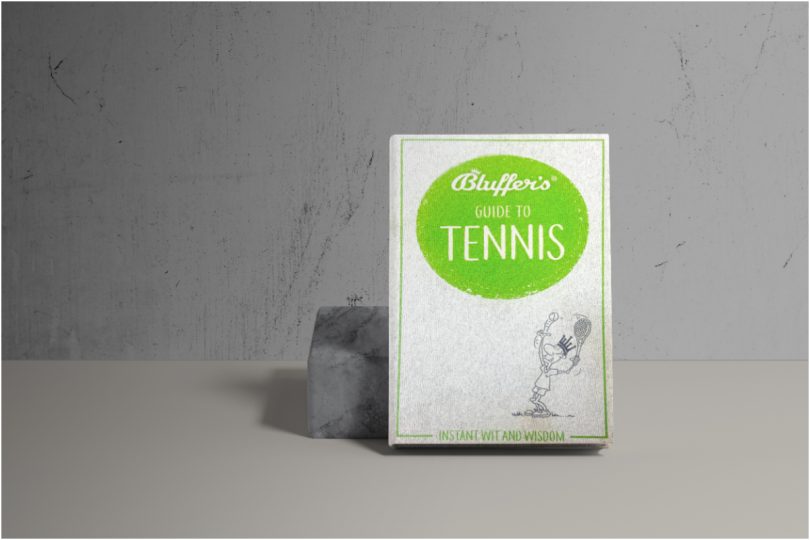 Every sport is funny until the person finding it funny realizes that it’s not. Bluffer’s Guide to Tennis is one such book that grants superpowers to its readers in such a way that by the time they are through with it, they know the game better than many veterans who spent years understanding it.

If you don’t know the difference between a top spin and a flat shot, the reason why the French word ‘Deuce’ is used in a sport that was made popular in Britain, or how the singles game is different from the doubles, then this book is what you require to understand the game. The narrative is penned in a witty form and makes you laugh more than a jokebook.

Why is the score in tennis not counted like other sports? Why are the different stages of the sports known as Game, Set and Match? How has the game evolved over the years and was it always this classy? Answers to such questions can be found inside this book because the writer has made sure that the readers know everything from the brand of the racquet to the requirement of Wimbledon through this guide.

The book is divided into 12 chapters, each dealing with different aspects of the game. While the first one ‘Tennis Genesis’ talks about the sport and how it evolved from an elite hobby to a professional sport, the second one ‘Getting in Gear’ is all about things ranging from the ball to the tennis racquet.

It details everything a tennis player needs to have in his bag even if he or she is not a professional tennis player, and it clearly tells the readers that a well-stuffed bag is enough to demoralize the opponent.

The next two chapters ‘What’s the score’ and ‘How may I serve’ discuss the strange scoring in tennis as well as the serve which is the most crucial part of a tennis player’s arsenal.

If you don’t know how tiebreakers work and who were the players who participated in the longest tennis match ever, don’t think … just read.

These chapters are followed by ‘Your Hot Shots’ and ‘Your Cold Shots’ which describe the many shots in tennis that you may not have heard about.

It clears up the misconception about a forehand and a backhand as well as many shots that take place on the tennis court.

‘Anyone for Tennis’ is about the different forms of the game (singles, doubles, etc.) while ‘Gamesmanship and Excuses’ equip the readers with tactics that might not be negative but surely don’t fall into the positive bracket as well.

The way this book describes the popular tennis players in ‘Hall of Fame’ is easily the most concise and accurate description of the many legends who played the game.

‘Major Majors’, ‘On the Level’, and ‘On the Surface’ tackle the different kinds of tournaments that are part of the Grand Slam circuit, the different surfaces they are played on and why some players are good on few surfaces, and not on the rest.

Even the glossary at the end is full of tennis anecdotes that help the reader know about the game and its terminologies so that they don’t come across as idiots, but as people who know what they are talking about.

And if you know you are an expert in things related to tennis, then this book will help you place yourself in either the expert box or in the not-an-expert box.

It will bombard you with all kinds of information that you may or may not have known, giving you access to a treasure trove you didn’t know even existed.

Yes, this book doesn’t have any image, any photograph, or even a cartoon to explain some of the things that an average reader might not know.

It would have helped greatly but since the text is witty, it covers for the lack of images and stuff. What it does bring to the readers is information that can’t be found online (unless searching specifically for them), and helps you fall in love with the sportsmen and sportswomen who make the game seem so easy with their practised shots and their expertise.

You might be a fan of current players like Rafael Nadal or Novak Djokovic or might be still in love with the older brigade featuring Jimmy Connors or John McEnroe, this book caters to all.

While describing the signature shot of players in these pages, it gives the readers a hint of which player executed it the best and if that doesn’t make you search for that player on YouTube (provided their video is on YouTube), I don’t know what will.

Use this book to impress your friends about your ‘newly-acquired’ tennis prowess, throw words like a windshield wiper, the lob volley, the reverse forehand and the run-around at them to make them respect you, but before that, you must watch a few matches to understand what you have just read.

It might backfire without watching the practical stuff and you don’t want to come across as a wannabe in front of your friends.