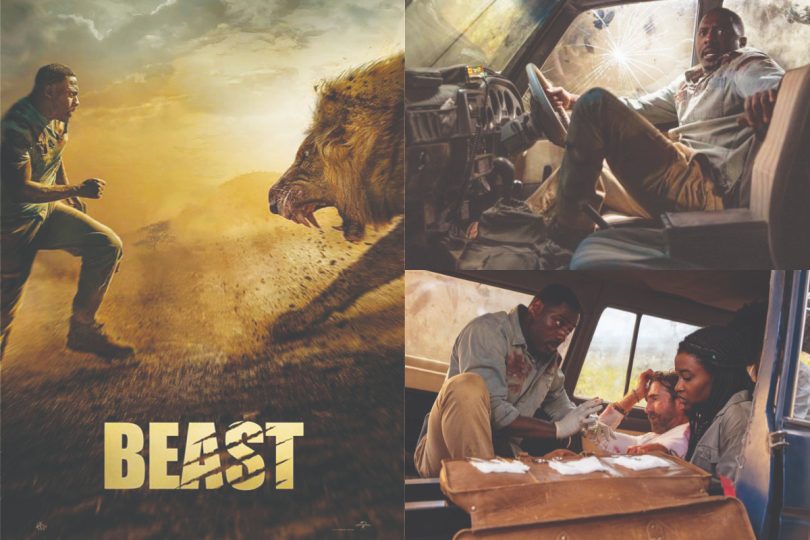 A man-eating lion’s roar is no match for a father’s protection, or is it?

It might be the most predictable ‘Man v Animal’ movie released in recent times, but it is certainly among the better ones. Director Baltasar Kormákur’s Beast pits a wild lion against a father who wants to make it up to his daughters for abandoning their mother when she was dying. Although the premise might not seem out of the box, the execution is, which results in the tough guy Idris Elba fighting a man-eating lion and giving the fans a once-in-a-lifetime opportunity to see the King of the Box Office go down fighting with the King of the Jungle.

Beast follows Dr. Nate Samuels (Idris Elba) who takes his two daughters Meredith (Iyana Halley) and Norah (Leah Sava Jeffries) to South Africa so that they could connect with their late mother’s roots. The good doctor’s intentions might be noble but his timing is awful as it coincides with the revenge of a man-eating lion who doesn’t differentiate between tourists and poachers. His primary target is those who killed his tribe, but he will not stop until he has killed all humans crossing his path. Both the species have survival instincts and while one is in his territory and the other isn’t, the one with a better plan will end up as the victor.

The biggest draw which attracts the audience to Beast is, without any doubt, Idris Elba, who might not become James Bond, but in this jungle does everything better than 007 would have. It is hard to steal a scene from a roaring lion but not when you are as blessed an actor as Idris Elba, who delivers a phenomenal performance. As a grieving widower and an overprotective father, he fights the lion as fiercely as any man would have in his position, and although the lion might be trained, they both give the expressions required to pass the fight as genuine.

One must also commend Sharlto Copley’s casting as Martin Battles, the childhood friend of Samuels’ deceased wife who serves as the American family’s tour guide. Being a South African helped the actor bring authenticity to his character which in turn helped the film. He shared the second spot behind the impressive Elba with the lion who roared, attacked, and made life hell for all homo sapiens. Unlike Jaws where the killer shark appeared in the second half, the wild lion was here from the word go, and even though the audience knew what he will do, it was how he did it that made them jump in their seats.

Although the film keeps the audience on the edge of their seats with near-perfect execution, the plot has loopholes. Why were the kids disgruntled and angry with their father doesn’t get much time on screen, and even though they missed their mother, the film had no flashback to show their love for the Samuels’ matriarch. Also, it is by far the most predictable ‘man vs animal’ story one could imagine, and if you have seen The Ghost and The Darkness, it is nothing new, except the one lion here is more dangerous than the two in the Val Kilmer – Michael Douglas starrer from the 90s.

The searching for a key sequence at night remains the only ‘awkward’ scene in the film, in which a gun would have been a better choice, than a key for the protagonist. The film’s second half features many animals but it seems that besides the ‘antagonist’ lion, the rest are friendly towards the humans. In the final act, when Idris Elba’s character makes the lion chase him, the director could have extended the sequence rather than coming to the climax with an abrupt cut.

The word that best describes this Idris Elba flick is ‘Cinematic’, and like Top Gun: Maverick this year, if the audience wants to enjoy this film, they will have to watch it in the cinema. Its runtime of 90 minutes is also impressive and even though a few minutes wouldn’t have damaged the film, the quicker it ends, the better. Veteran cinematographer, Philippe Rousselot’s work is outstanding since he captures the natural beauty of South Africa brilliantly. The Man vs Lion battles, be it below the jeep, on the ground, or in what was considered a safe haven are a treat to watch because of the cinematography.

Had Ryan Engle’s screenplay been a little more polished, the film would have had more emotion than suspense. Compared to the recent OTT release Predator sequel Prey, Beast doesn’t have a powerful climax, and that’s one of the reasons it dropped short of being a classic. Even then, Idris Elba keeps the audience’s interest alive in the narrative and gives a performance that would have automatically granted him the 007 license. Due to the cinematic experience this film provides, it will prove to be a great one-time watch for those who loved Jaws, The Ghost and the Darkness, and even the original Predator.