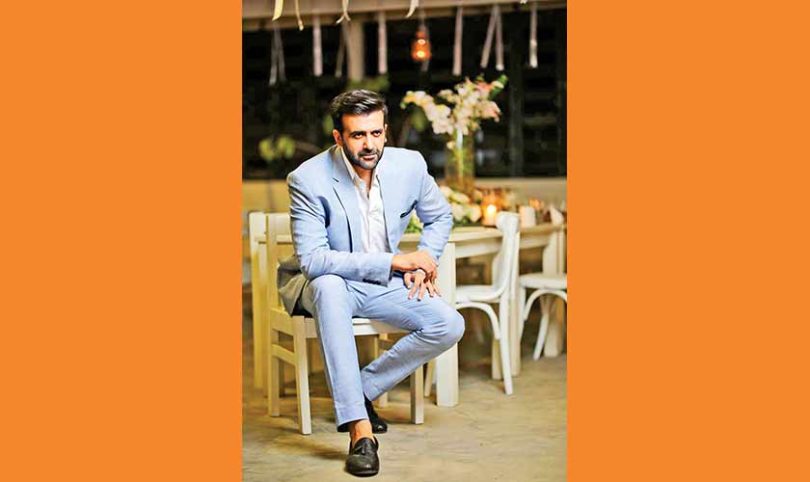 It seems that the days of tall, dark, handsome and of course, talented actors playing the main lead are over because had they not, Hasan Ahmed would have been in demand. Seen in countless drama serials, you seldom see him playing the good guy, despite looking like one; he believes that he shines as an antagonist because of his ‘inner demons’. Those demons must be in his head because Hasan is more of a family man, married to actor and fashion model Sunita Marshal.

Instep spoke to the talented actor for whom acting genes skipped a generation, and he wants to continue his maternal grandfather Latif Kapadia’s legacy in his own way.

Instep: Why are you being restricted to negative roles? Will we ever see you on the right side of the law?

Hasan Ahmed: It seems that no one sees a good guy in me, except me! (Laughs) It does make me wonder now that you have asked it, but I think that when writers and directors think of me, they see someone who can get away with the deeds a hero won’t approve of. Trust me, I am a good guy at heart and if they try me as someone on the right side of the law, I will not disappoint them, the viewers, and of course, the law!

Instep: You were easily the most hated person earlier this year when Mushk was doing well on TV; how did you manage to bring in so much negativity in that character?

HA:Mushk was something magical for me and the other actors who gave their 100 percent to the drama. In the first half, people used to sympathize with my character who was bedridden and was being slow poisoned by his own wife (played brilliantly by Zara Tareen).

In the second half, after I was saved by Guddi (Urwa Hocane), my character ends up kidnapping her than thanking her. By then, all sympathies were with Imran Ashraf’s Adam and not me, and that’s why people looked at me suspiciously wherever I went. I am a very good person at heart, and a lovely friend, who doesn’t do such things off-screen!

Instep: Don’t you think good actors like you shouldn’t work in plays with an ensemble cast as by the end, it’s the hero or the damsel he saves who are remembered mostly?

HA: The issue is that you always can’t have things your way; if you choose your roles wisely, then you will not be in demand. Working with an ensemble cast gives actors like me a chance to improve ourselves. We get to meet senior actors who can teach us a thing or two, while we also get to hang out with directors who are usually way too busy in their projects. My personal favorite project Pinjra also had an ensemble cast but people remember my character from that play and I am thankful to them. Ensemble or no ensemble cast, the drama gave me a chance to work with both Kashif Nisar (director) and Faiza Iftikhar (writer) before they collaborated on Ranjha Ranjha Kardi. Oh, I would have loved to be in that play too!

Instep: Do you agree that digital is the new medium for those actors who are talented but are not given opportunities because of nepotism?

HA: I feel nepotism can get you from A to B, but no further. People didn’t know that I was Latif Kapadia’s grandson when I ventured into acting and that’s what worked in my favor. However, despite so many TV channels and so many production houses churning hits, it’s hard to find good roles, hence less work for me. Yes, I agree that digital is coming out as the new medium, but only for those who are willing to experiment. I did Pyare Baba recently where I played a hard-working father who works as a security guard and a party clown to support his son but isn’t there when it comes to being there for his son. That made me realize that our writers, directors, and actors have a lot of potential and if they are given a free hand, they can do wonders.

Instep: Usually, actors who are married to actors get cast together in dramas, but that’s not the case with you. Care to explain why?

HA: Advertisers think we look good on screen and we (Sunita and I) are paired opposite each other in commercials, but yes TV is a different medium. We have worked together in Geo Entertainment’s Main Akeli as main leads but nothing since then, either on Geo Entertainment or as main leads. I would say it has more to do with our career graphs as Sunita continues to play good characters in dramas and is great at whatever is thrown at her, while I have made a name for myself as a villain.