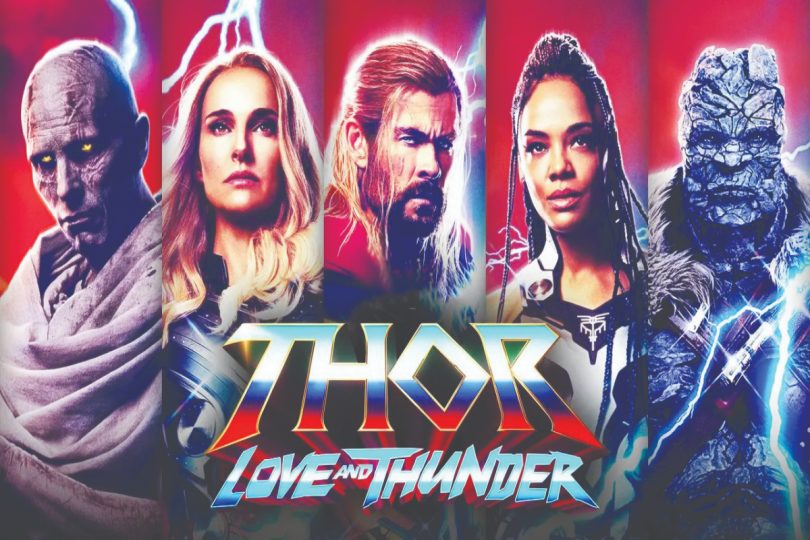 What works for one film may or may not work for another! That’s something director Taika Waititi should realize before he moves ahead into another project because his decision to recreate iconic Avengers: Endgame moments failed to do justice to Thor: Love and Thunder, the latest entry into the Marvel Cinematic Universe.

The film can be categorized as an extension of the Thor franchise but does little or no good to the MCU since it takes the Thor series back to the pre-Taika Waititi phase. If you don’t remember that phase, let me remind you because the God of Thunder broke up with his ex-girlfriend, went on to destroy his home planet, and joined hands with the Guardians of the Galaxy after killing off Thanos but after he ‘snapped’ once.

Thor: Love and Thunder begins with the origin story of Gorr the God Butcher (Christian Bale) who after losing his daughter to drought, is chosen by the Necrosword and begins killing all gods for their ignorance. However, when he attacks the New Asgard, he battles against Thor and his friends including Valkyrie (Tessa Thompson), Korg (Taika Waititi), and a new mighty Thor. Their combined might sends him away for the time being but is unable to save the Asgardian kids who become Gorr’s bait for the ‘gods’.

Things become interesting when it turns out that the new addition to the team is in fact Thor’s ex-girlfriend Dr. Jane Foster (Natalie Portman) who in an attempt to cure herself of cancer gets her hand on Mjölnir which turns her into the female god of Thunder. However, every time she uses the Mjölnir, its magic weakens her defense against the disease, sending her towards her death faster.

Thor and his team featuring his ex-girlfriend and his trusted allies manage to rescue the kid but not before angering the Olympian god Zeus (Russell Crowe), stealing his thunderbolt, and losing one of their allies in the process. That’s just one part of the story, in the other part they had to face Gorr the God Butcher, whose only mission in life is vengeance and who has the power to annihilate all gods, including Thor.

Co-written by Taika Waititi and Jennifer Kaytin Robinson, Thor: Love and Thunder takes the story of Thor forward, but in order to do that, they had to give some closure to the past. Through Jane Foster’s entry and the shattered Mjölnir’s reappearance in Thor’s life, they manage to do just that. The scenes featuring the jealous Warhammer are beautifully done and give the weapon a life of its own, which wasn’t there in the case of either Mjölnir or any other weapon. The new Asgard has grown since the last time it was shown on screen, and that’s the beauty of being part of the MCU which keeps on growing.

However, the star of this film is not the male or female Thor but the antagonist played by an unrecognizable Christian Bale. When he didn’t have the power to slay gods, he was shown as a weak human who believed in his god but once he realizes his mistake, he transforms into a being more dangerous than Thanos. While Thanos wanted to wipe the human beings from the face of the Earth, Bale’s Gorr wants to annihilate those who are supposed to be in charge of the well-being of the humans.

The scene where he terrorizes the Asgardian kids without touching them, and with a mean smile on his face is enough to send shivers down anyone’s spine. Despite having less screen time and fewer scenes than expected, he manages to successfully return to the familiar territory of comic book films, where he once used to reign as Batman.

The same goes for Russell Crowe’s Zeus who is just there for a few minutes but steals the show as he often does when playing the bad guy. With a thick Greek accent, he angers Thor who wants his help to save the Asgardian kids but his request is denied because Zeus doesn’t want to do anything with the God Butcher. Considering he is a god himself; he had all the right to do so, and Crowe’s performance showed that he was convinced that he was doing the right thing!

Chris Hemsworth dominates the action sequences here while Natalie Portman takes the lead in the romantic sequences but together their arc lacks chemistry. The two characters are without any doubt an integral part of the franchise’s development but when Thor is in the scene, he is more in the supporting role to Jane which might seem okay in the trailers but not in the film. Instead of acting like two gods who meet after a handful of years, their interaction comes out as two youngsters flirting with each other.

Secondly, the director tries to include too many central characters in the film, which results in neglecting already established fan-favorite characters like Valkyrie (Tessa Thompson) and Korg (Waititi, himself). Yes, the action sequences are there, the wow moments are scattered around and the visual effects are first-rate but Thor: Love and Thunder seem to be missing the magic here, the same one that saved Thor: Ragnarok and was expected from the makers this time around.

It would also have been better had the director brought something new to the MCU instead of recreating already popular scenes because the recreation failed to evoke the same response from the audience. It reminded me of the third and final Iron Man flick where one Iron Man suit fitted all and looked more hilarious than serious. What’s done should not have been repeated this soon, because the audience especially the Marvel fans don’t forget their favorite scenes.

The savior of the Thor franchise might become its destructor if not controlled. Co-writer/actor/director Taika Waititi needs to rediscover his magic before its too late for both him and the audience. The storytelling in the new Thor movie wasn’t up-to-the-mark, the characters seemed abandoned and the gimmicks used here would have been ideal for a special TV movie featuring Thor, but not as a film.

I am talking about the Jean-Claude Van Damme-style split at the start of the flick (yes, you read that right!), the fight sequences featuring the kids (so 1980-ish!) and the return of the Asgardian theater troupe wouldn’t have been a part of a serious ‘Marvel’ flick but they were used in this film. Chris Hemsworth is a wonderful actor and is the ultimate Thor, but the director must understand that he has a responsibility on his hands and he should take the character in the right direction before his own direction is changed.