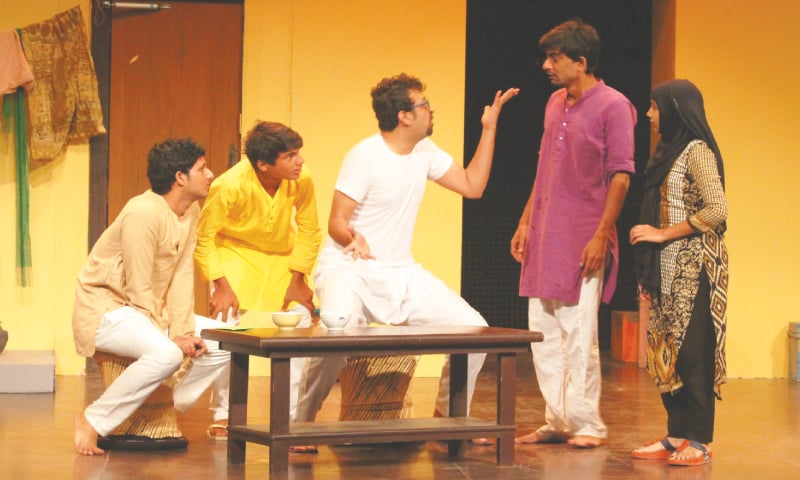 National Academy of Performing Arts (NAPA) may not seem to be a place where children would get entertained, but through Bachpan Ke Rung, their first children’s theatre festival, they have proved many wrong. What better play to entertain young minds than the classic Chacha Chakkan Ne Tasveer Taangi, penned by the founder of Urdu drama, Imtiaz Ali Taj.

Chacha Chakkan may not be an original character — he was an inspired version of Jerome K Jerome’s creation Uncle Podger — but we can all relate to him. He can be the forgetful father, the overconfident uncle or the luckless friend we meet every now and then, and that’s why he has been around for so long, entertaining the audience.

Director Zarqa Naz must be commended for bringing the character to life so that the youth of today can update themselves with characters like him, and he brought the house down with his antics.

How Farhan Alam, the actor who plays Chacha Chakkan, makes everything into a marathon of disasters is what makes this play so loveable for both the young and the old. He doesn’t look eccentric in person, but it is the way he gets things done that make you believe that he is crazy.

All the characters in the play, be it his wife (Asiya Alam), servant Bundu (Syed Arsalan), or his kids (Raheel Siddiqui, Kiran Siddiqui and Kaushik) were outstanding as they complimented the character’s idiosyncrasies by being there for him. His energy bounced off all the characters as first he writes a letter that no one understands, then tries to hang a picture just to save the money given to a handyman and the same was the reason for fixing the fuse.

During the show, some of the kids were invited to sit right in front of the stage so that they could interact with Chacha Chakkan. The NAPA graduate Farhan Alam was in full form as he kept the audience engrossed and hardly left the stage except for a scene where he had to go and don the sherwani.

Three of Chacha’s famous acts couldn’t have been so beautifully combined together had the director and writer not been near perfect in their tasks. It was amazing that no one looked at their watches for the show’s entire 45-minute run, making it an unforgettable experience.