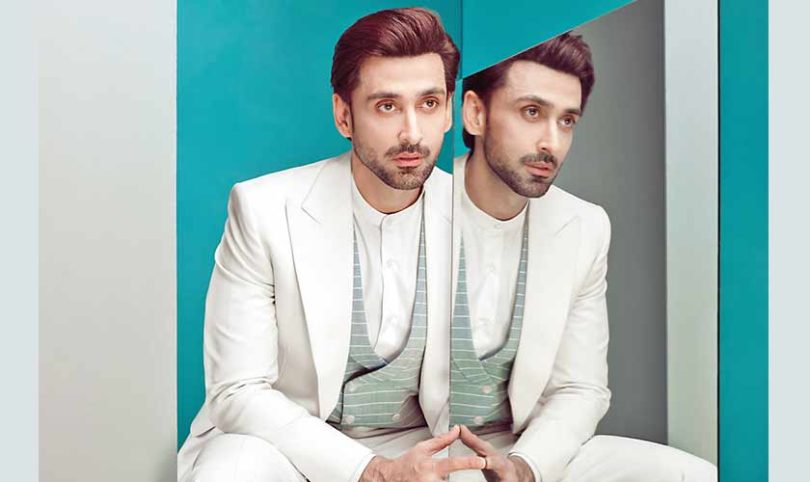 Sami Khan’s been very, very busy. In the past few years he’s delivered some very strong characters in serials like Inkaar, Ishq Zahe Naseeb, Saraab and Dulhan, before which he built a solid portfolio in dramas like Tere Pehlu Main, Jo Chale To Jaan Se Guzar Gaye, Sabz Pari Lal Kabootar, Do Qadam Door Thay, Bashar Momin, Mannat and Dhaani in addition to Teri Meri Jodi. Having delivered so many hits on Geo TV, Sami returns to what is considered his home ground with the upcoming Mohlat.

Instep On Sunday caught up with the hero ahead of the airing of Mohlat and spoke to him about his recent projects and experimenting with cinema. Excerpts from the conversation…

Instep: How would you summarize the past few years of your career?

I also returned to films after 15 years with Gumm: In The Middle Of Nowhere, Wrong No. 2 and Kaaf Kangana (all in 2019) and reunite with my Bashar Momin co-star Faysal Qureshi in our Hollywood debut The Window. I was part of two upcoming Pakistani films: Yaara Vey and Lafangey Chapter One. So, yes, I was busy!

Instep: Do tell us something about the upcoming Mohlat?

SK: It’s a Samira Fazal play in which I get to play the main lead opposite Kinza Hashmi; the legendary Bushra Ansari plays my mother. The story revolves around a broken family, where the daughter strives to meet high expectations and suffers in the process. I would like to mention here that working so closely with a young actress like Kinza and a veteran like Bushra Aapa was an amazing experience and I hope it reflects on screen the way it is intended to. Veterans like Tanveer Jamal, Asma Abbas, Komal Aziz Khan, Javeria Abbasi, Saife Hassan, and Nida Mumtaz are among some of the actors who feature in the drama serial, making it a perfect mixture of both veterans and young blood.

Instep: Let’s talk about your most difficult role in recent years – playing two Asfand Yars in Saraab – one was a real person, the other was an illusion…

SK: Saraab was not just a drama but an experience for both Sonya Hussyn and myself; under Mohsin Talat’s brilliant direction, we not only managed to highlight a social issue that is a part of our lives but also taught the audience how to deal with it. Before that, not many plays tackled schizophrenia on our TV but kudos to Edison Idrees Masih for penning the script so well that people have now started taking it seriously, and more importantly, are considering it a disease.

Saraab gave me the chance to explore myself as an actor who could deliver different expressions, without any change in physical appearance, at the drop of a hat. Thankfully, the audience loved the portrayal of the real Asfand Yar and termed him as an ideal husband whereas hated the illusion that appeared as Hoorain’s hallucination.

Instep: You’ve mostly played the good guy onscreen but also aced a dark character like Mikaal in Dulhan. Which one is more difficult to portray?

SK: Playing a good character is relatively easy but the real fun is in playing a negative character, or one with shades of grey. Whenever I play the bad guy, I don’t think of myself as the villain but as someone who is right in his own mind and that makes things easy for me. My character in Dulhan begins as the bad guy but earns the audience’s sympathy by the time it ends. Many fans haven’t forgiven me for my performance in Rasm-e-Duniya and Toh Dil Ka Kia Hua for various reasons and I am glad they didn’t because that way they remember the character.

Instep: Phaans is currently doing well and your character is being appreciated for his honesty. What goes into creating these characters?

SK: Acting is not just our job or profession but our passion; I wouldn’t be honest with it if I did one character over and over again without bringing something new to to the table. Thankfully, I have always worked with good writers and directors who encourage me to bring something new to the characters. Even in Phaans, I had to draw suspicion to myself in the initial episodes otherwise it would have killed the suspense that keeps everyone guessing. I am happy that my fans accept me in any character that I play, and it is their love and encouragement that keeps me going.

Instep: And finally, something about the films you were recently part of – Yaara Vey, Lafangey Chapter One and The Window…

SK: Both Yaara Vey and Lafangey Chapter One are ready for a release and while the former is a romantic flick, the latter is Pakistan’s first horror-comedy. Yaara Vey features Aleeze Nasser as the main lead opposite Faizan Khawaja and myself whereas Saleem Meraj, Mani, Mubeen Gabol, and I play the Lafangay in the other flick. As for The Window, it will be my second film with Ammar Lasani and Kanza Zia, the director duo behind Gumm: In The Middle Of Nowhere. The film is a project for a Western audience and features Hollywood actor Faran Tahir, veteran actors like Hameed Sheikh and Faysal Qureshi besides myself and Suhaee Abro who plays the main character. It is based on real events and is completely in English. I’m quite excited for its release since it will be my entry into Hollywood.